You asked: How do you tell a story in 3 acts? 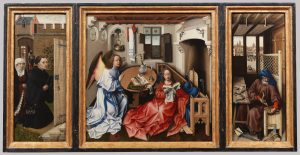 The number three has a sort of magic to it. Since Medieval times, works of art have been painted in triptych to show motion, like in the Mérode Altarpiece. (The Cloisters Collection, 1956, The Metropolitan Museum of Art)

What does it mean to tell a radio story in three acts?

In 2012, Sharon returned to radio after years working in print journalism, and says she struggles with the same thing we all do: staring at a blank screen and wondering how to deliver all the facts and scenes in an order that will keep people interested.

It’s called structure. Every news story has one. But as any daily news reporter will tell you, the real world doesn’t always fit neatly into an obvious structure. There is rarely a clear protagonist or villain. There isn’t always a beginning, middle and end. And if the story you are covering doesn’t have a natural structure, you will need to create one; as a sort of life preserver to keep you from drowning in information.

The three-act structure is the most basic organization a story can have and makes the story feel like it’s going somewhere. The number three has a sort of magic to it. It’s an odd number. Prime. Can’t be easily cut in half. It feels unsettled, so it propels things forward. Beginning, middle, end. This, that and the other thing. Since Medieval times, works of art have been painted in triptych to show motion. Songs often repeat their chorus three times.

A few years ago, I did a study of 4-minute stories on NPR, and I found that the best ones had three distinct sections.

Tom Goldman’s sports stories usually started before the game, then had a section about the game, then talked about what happened afterward. Each section sounded unique and had a purpose.

Here’s an example from when Tom covered the 2016 World Series:

Rather than “he said, she said,” back and forth for the whole story, Andrea would firmly plant you with the planners for the first act: Republicans have this plan, and here’s their thinking and tactics. Then she would start a clear Act II: Down the hall, let’s meet the Democrats who are coming up with their response and their tactics. Act III would often tell you what will happen when the forces collide.

This seems simple. It is simple. And it is enormously useful. When I’m working on a short, basic news story, I always draw three circles and figure out three scenes or topics to put into each. The key is that there is a clear dividing line between each section. There should be a change of scene. A change of character. A change of focus.

For instance, you could go to a press conference or political event and just play a bunch of cuts from the event. It will convey information, but not action. I prefer to get to the news conference early and plan a chronological structure like this:

Before the event: What’s at stake »  The event  »  After the event: did anything change?

Each section should sound different and you should make it clear what is about to happen. Give the listeners a signpost so they know where they are in the story.

Another classic way to break up a quick news story:

By moving in and out of the scene with a real person, the piece has variety. It allows the action to flow from the problem. And it allows our main character to reflect on the action.

The number three isn’t set in stone. It just happens that in a 3-4-minute story, you will only have time for three sections. If you have more time or ambition, there are other structures you can use; other ways to give your story a backbone.

This is a classic of short-form reporting.

For instance: There are too many potholes on Route 9! (Sound of bumps) And so citizens have started to fill them in on their own. (Scene with shovels) But this created a different problem: people with shovels slowing down traffic in the middle of Route 9! (Mayor complains) And so now the city is trying to work out a deal with the neighbors.

Another structure I used to rely on is the reporter-as-detective. This works especially well with a fun feature.

Why is this weird thing happening? » Reporter goes inside the world » Reporter understands the motivations » Reporter explains to outsiders

Or, if you have enough time and the right story, you can even use the Hero’s Journey. It’s been the go-to structure for thousands of years. 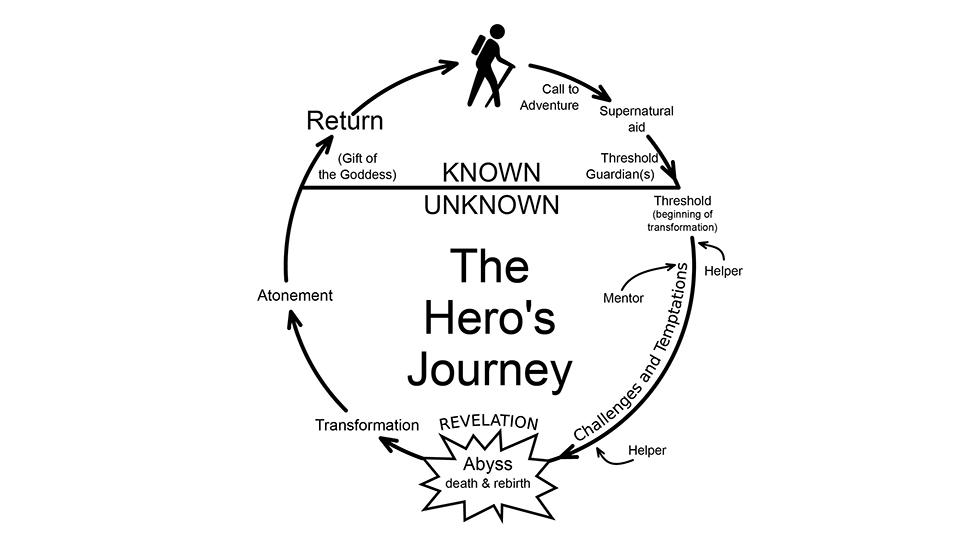 The “Hero’s Journey” has been a go-to storytelling structure for centuries.  (Wikipedia)

The actual structure you pick doesn’t matter as long as you’ve found a way to communicate that you have a structure; that you aren’t wandering in the news wilderness. Structure lets the listener know that, like the classical Hero, you are on a news journey with stops along the way.

The statistician George Box used to say about economic models that “all models are wrong, but some are useful.” It’s the same thing with structure. Pick a pattern that will be useful and helps you get to the hard part: writing. Start with three circles, those three acts, and the blank screen doesn’t seem so empty.

This post is the result of a reader question. We want to hear from you next.

Have you always wondered which mic you should use in ‘X’ situation (by the way, we already answered that)? Want to know what you need in a Facebook Live kit? Anything goes — we just want to know what you’re curious about. Send us an email — trainingteam@npr.org.

Robert Smith is a host and correspondent for NPR’s Planet Money.