How NPR's Sam Sanders is finding his voice

NPR reporter Sam Sanders wrote this in the midst of a fascinating conversation about the public radio voice, sparked by an essay on Transom by Chenjerai Kumanyika. Is there a typical public radio voice — perhaps a “white” voice? Is there room for new and different ways of speaking? And what does all this mean, in 2015, for younger reporters of color? How should they find their “public radio voice”? This is a lightly edited version of Sam’s story. 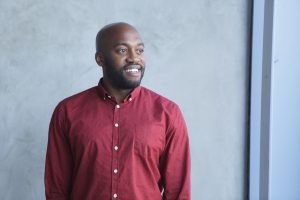 I spend a lot of time focusing on the way I sound, re-listening to old pieces, trying to find new ways of making me sound like me. I think I’ve kind of figured it out. My goal is to sound like a clearer version of myself on-air. That sounds simple, but it has taken some time.

When I first started as a Kroc Fellow, Sora Newman gave me a few sessions of vocal training, and helped me voice my first few pieces. She was awesome. And a lot of the basics she taught me can be applied to anyone, at any age, of any gender, and of any race as they try to make their voices “work” for radio.

A few universal truths for tracking

If you can grasp those four ideas and be conscious of them as you try to record your voice, you’re off to a good start.

It often takes a while to get there so, in the meantime, a lot of beginner folks — myself included — try to sound like other people we’ve heard on the radio, or the person who is training us. The problem is, that pool is not extremely diverse. Sora never told me to do this, but for a while, I tried to kind of sound like her, an older, mild-mannered white woman. This was not necessarily bad, but it wasn’t quite me.

In the same regard, I hear a lot of people trying to talk like Ira Glass. For one, his voice really only works for him. For two, just do you, people!

But it is inevitable that we will all spend time imitating voices we know until we actually find how to best present our own. That public radio does not have a fuller palate of voices to mimic during those periods is sad, but it is also a fact that is changing. I got to start doing radio in a world where I could listen to Shereen [Marisol Meraji] and Sonari [Glinton] and Claudio [Sanchez]. And that’s a good thing.

What came much later for me and I think has really, really helped me start sounding the most like myself was my writing. It took me years to start writing to my voice. But I think I am finally there.

I can look back on one of my latest radio scripts, a Morning Edition obit on ESPN anchor Stuart Scott.

There are several lines I would have been afraid to write years ago, in part because I assumed all the rules of written grammar apply to writing for radio. When I really started writing to my voice, I realized a lot of those rules can be disregarded. Here are some lines from that script that I wrote just for me:

SAM: Stuart Scott might be BEST known, really, for one word —

He sprinkled it throughout his sportscasts for YEARS — kinda like a really cool exclamation point.

But it was more than just Boo-Yah. On ESPN, Stuart spoke the language of young people. Of hip-hop.

Do you see what I did there? I used incomplete sentences. I said “kinda.” I used a simile with the words “really cool.”

And then there’s this bit:

SAM: And there were his signature catchphrases. Like, when a player had done something really great, Scott would say: Just call him butter, cuz he’s on a roll.

HARRIS: We were like hey! That guy just said what we said five minutes ago. And he’s getting paid for it and we’re not.

SAM: Harris hosts ESPN’s SportsCenter. He says before he got to ESPN, he looked up to Scott — a black man — not just because he SOUNDED and LOOKED like him. But because he was just REALLY GOOD.

I used the word “like” in the same way I would have if I were talking to you at a bar. I said “really good” instead of something print-newsy like “phenomenally gifted newsman,” or “a revolutionary voice that defied convention blah blah blah.”

It took me years to get to the point where I can write how I talk. And I think the one thing that helps me keep doing that is to read over every script out loud, to myself, before I edit, and before I track. I ask myself this question, “Is that how I would actually say that sentence, in the real world?” If I can’t answer yes to that question, with every line I’ve written, I need to revise. Sometimes, even now, I will go back and listen to old stories and see where I didn’t get the scripting just right. There is always room for improvement.

I’ve found that writing to my voice automatically keeps my sentence structure simple and understandable to the human ear. It makes me more likely to use a simple Subject —> Verb —> Object  structure without too many unnecessary clauses. Every now and then, I teach beginning radio students, and when I talk to them, I always stress the SVO format, because even if you can’t write perfectly to your voice just yet, remembering the SVO structure will at least help keep your scripting clear.

Should I “sound black”?

Another thing I’ve had to get over is feeling like I had to sound a certain way on air, to represent a certain constituency. Should I make an effort to sound black on the radio, whatever that means? To prove that I have a unique perspective and yadda yadda yadda? Should I purposefully sound Texan? Or like someone who was raised Pentecostal? I could go on.

I’ve had to let that go.

Some of my friends think I always sound “black” on the radio. Other colleagues say they never would have known. Sometimes my Texas comes out. Sometimes I actually sound like a Californian.

But what is most rewarding for me now is that people know it’s Sam Sanders when they hear me on the air. I sound like myself, and that is a mashup of all the things I am, and it is a tone that I can subtlety shift based on the needs of a story. I can be somber for a story about death, or play up the charm in a fun feature. But it’s all a point on this spectrum of this voice called Sam Sanders.

As the outpouring of commentary during our [January 2015 #PubRadioVoice] Twitter chat proved, this is clearly a topic that we need to talk about more. What I hate is the sentiment expressed by some during the chat last week: “Don’t think. Just talk.” That kind of thinking minimizes the struggles people of color, or young women, or members of the LGBT community, or those with speech impediments, or whatever, have in speaking their most authentic selves while struggling within a system and an aesthetic that often tell them the way they sound in real life isn’t really what “works” on air.

I think the goal for all of us doing radio is to make it sound effortless. To keep our essence in our reads and make the listener think we’re “just talking,” while knowing that the journey to that “just talking” place takes a lot. A lot of thought. A lot of practice. And a lot of time.

Sam Sanders is a reporter and podcast host at NPR.