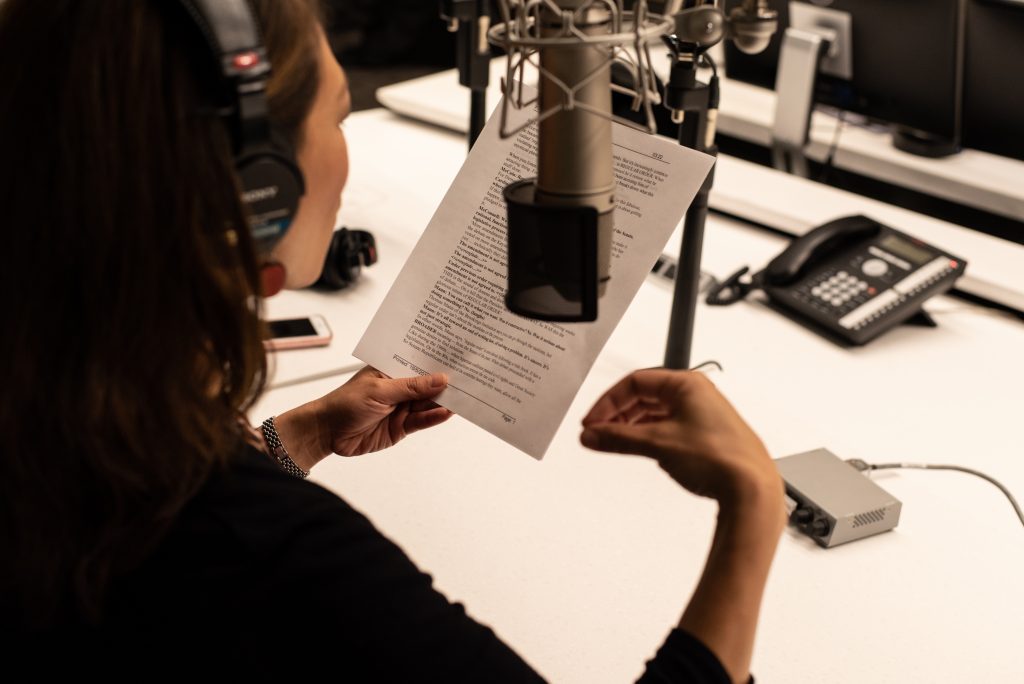 A great intro should show or tell listeners why they should keep listening. (Jenna Sterner/NPR)

There is no perfect template for a radio intro. In fact, that’s the point: Intros should surprise you. They should grab your ear and demand you listen, in part, because they don’t all sound the same. And of course, in a news program, they should tell you — clearly — what a story is about. How to do that — and do it well — is a daily struggle.

Here are a few basic guidelines to help you along (check out some examples of good intros here):

Jonathan Kern explains why in his book, Sound Reporting: The NPR Guide to Audio Journalism and Production:

“Imagine a six-sentence intro that tells us that lawmakers are working on a new bill; that Democrats take the position the legislation is needed to correct some alleged abuse by big corporations; that Republicans say they think the law would hurt the economy; that the President says he’ll veto the bill if it gets to his desk; that the GOP says there aren’t enough votes to override a veto; and that NPR’s Mark McGuffin has more. Why should anyone stick around for more?”

In other words, whet the appetite; don’t satisfy it.

2. Read your intro out loud

I’ll say it again: read your intro out loud. Make sure you can read it and sound natural, like you’re describing the story to a friend or your mom.

Better yet, before you write your intro, say it. Then type. Too much editing time is wasted turning print-style intros into spoken language. If you’re gasping for breath, your sentences are too long. If you’re using words you’d never use when you speak, such as “retailers” or “numerous,” change them.

A lot of intros get caught in the trees and miss the forest. They tell us three important facts about what happened today in the Middle East (“10 people were killed in a bombing; this group took responsibility; the foreign country where it happened is on high alert”), but they fail to explain why it matters or why listeners should stick around to hear more.

4. Be clear about your angle

It’s often said that an intro is a promise to listeners. The promise can be the angle you choose, the journey you propose or the question you intend to answer.

Just because your broad topic is “today’s violence in the Middle East” doesn’t mean you’ll achieve full coverage of that in four minutes. But you could deliver a satisfying story about one person who’s trying to negotiate peace, or one town affected by the violence, or one aspect of an ongoing debate (e.g.: “As NPR’s Mark McGuffin tells us, Egyptians are debating the balance between security and democracy”).

If that’s what your story has to offer, be transparent with the listener so they don’t expect something different. And then make sure your story delivers on that promise (like NPR’s Aarti Shahani does here).

For the audience, the story begins to unfold from the minute the host begins reading your intro, not the moment when your voice appears. So however you structure your narrative, don’t consider the intro the icing on top or the dumping place for facts you couldn’t fit into your story. That’s a recipe for listeners turning off the radio or skipping your story on NPR One.

6. Match the tone of your story

Is your piece humorous? Whimsical? Deadly serious? Then your intro should be, too. Otherwise, you create tonal dissonance, plus an impression that the host is out of the loop on his or her own program. (In this story, Weekend Edition host Rachel Martin shares the adventurous, fun tone that reporter Ailsa Chang brings later.)

Again, we turn to advice from Jonathan Kern:

“Putting too many ‘buts’ in an intro leaves the listener unsure what the piece is about. We are just absorbing one piece of information when we’re presented with another one that effectively undercuts it.

For example: ‘Today a team of physicists at Brookhaven National Laboratory in New York made an announcement that could go down in the history books. They’ve measured an obscure quantity that describes how a subatomic particle behaves. But it could have important consequences for what’s called the Standard Model of Physics. The standard model is the closest thing physicists have to a theory of everything … a final equation that describes all of matter. The standard model has been tested exhaustively. But no one has yet found a crack in it. NPR’s ____________ reports.'”