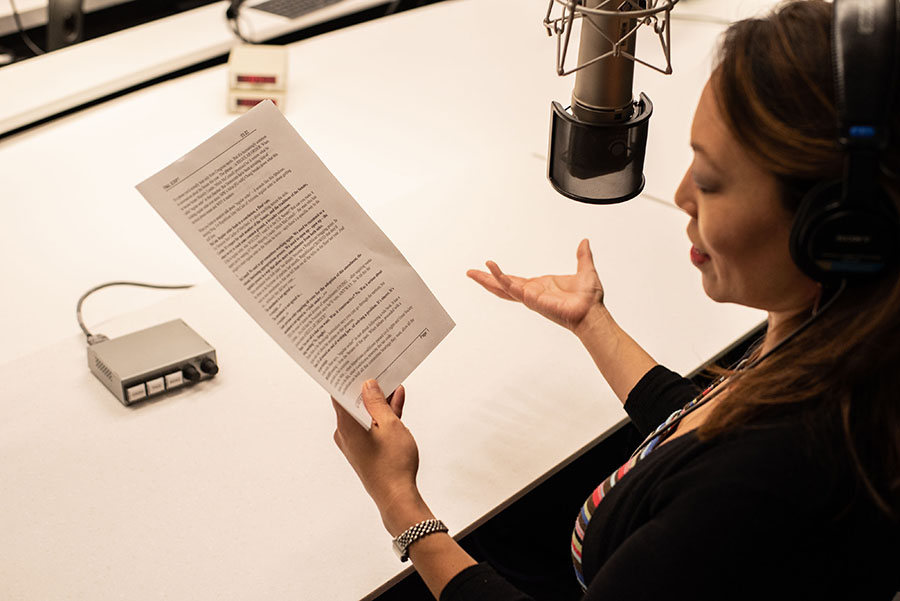 Truth be told, not every broadcast radio script looks the same! But there are elements every script should share in order to make sure nothing goes wrong in the editing or mixing process. This post should give you a sense of the basic components of a public radio script.

The real-life example is a story by NPR Congressional Correspondent Ailsa Chang about “regular order.”

Notice the capitalized phrase “REGULAR ORDER.” The reporter is indicating that the person reading the intro should emphasize those words.

Ailsa offers a pronouncer — [EL-suh] — which is critical for any names for which the pronunciation is not obvious. Write out the word phonetically and note which syllable should be stressed.

It’s a phrase you’d normally hear only from Congress nerds. But it’s increasingly common in conversations about Senate this year. The phrase…is REGULAR ORDER. When he became Senate Majority Leader, Mitch McConnell promised he’d restore what he called “regular order” in that chamber. But Democrats have been accusing him of violating regular order ever since. NPR’s Alisa [EL-suh] Chang breaks down what this mystical phrase means and WHY it matters.

The body of a piece

Set apart your tracks (the reporter’s narration) from your acts or “actualities” (the words other people are saying). There are lots of ways to do this. Ailsa does it simply by bold-facing her acts and including the speaker (“McCain”).

When you listen to senators talk about “regular order” — it sounds like this fabulous, amazing thing. For Republican John McCain of Arizona, regular order is about getting stuff done.

McCain: Regular order leads to a conclusion, a final vote.

For Democrat Ben Cardin of Maryland, it’s about reaching across the aisle.

Some common words to describe parts of a story

How long is that actuality?

It’s a good idea to indicate how long each actuality is and how long you’d like the ambience to be heard. This will help you time out your piece and ensure the producer mixes your piece properly.

If you write using a program such as NewsFlex (used at NPR), there are automated ways to note the length. It looks like this:

<<OBAMA: We the People of the United States, in Order to form a more perfect Union, establish Justice, insure domestic Tranquility, provide for the common defense, promote the general Welfare, and secure the Blessings of Liberty to ourselves and our Posterity, do ordain and establish this Constitution for the United States of America.>>

If you write using Microsoft Word, Google Docs or another non-news-specific program — you can still indicate length.

OBAMA: I am the son of a black man from Kenya and a white woman from Kansas. (:10)

How to indicate notes about production and mixing

The amendment is not agreed to…
<<crossfade…>>

The amendment is not agreed to…
<<crossfade…>>

Under previous order requiring 60 votes for the adoption of this amendment, the amendment is not agreed to. <<fade under…>>