Campfire tales: The essentials of writing for radio 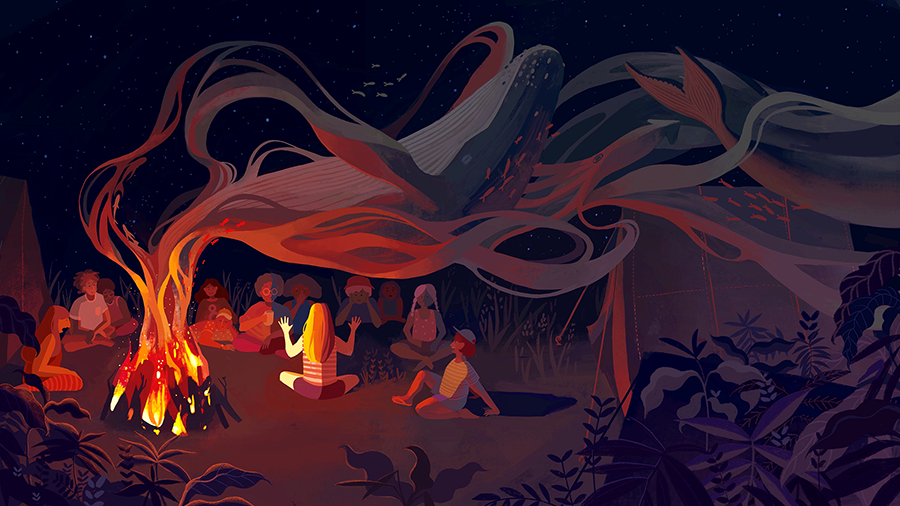 The two elements of a story are tape and copy. There should be a nearly equal balance between the two, at least in terms of their importance to the story. One can think of tape as the photographs, although that’s not a perfect analogy. Perhaps the analogy of two dancers executing a complicated tango; both move in near-seamless synchrony, and to the eye, one can’t tell who’s leading and who’s following. That quality of effortlessly leading the listener from one piece of tape to the next is what good copy does.

So how does one accomplish that?

It starts with a clear focus

Each story should make one main point, or handle one clear issue. Sometimes the writer can tackle two in one story, but they have to be closely-related and complementary. If you can’t summarize what the story is about in a single sentence, you’re headed for trouble.

Think about rhythm and flow 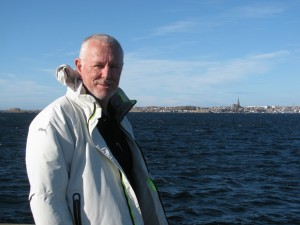 Telling a story on the radio owes its origins to fiction and to oral storytelling. Think about those stories that we remember as “campfire” stories. They seduce and tease the listener at the beginning, hinting at some great or horrible revelation, but revealing the details bit by bit to hold the listener’s attention until the very end. To make that work for journalistic non-fiction in radio, one needs to follow certain rules.

Use each actuality to make a single point. If one side or angle of a story contains two important points, try to get different people to make them. If you can’t, use two acts rather than one to get them across.

Don’t double back on a story. Make one point, move on to the next. Avoid redundancy.

Raise a question in the listener’s mind. Ideally, you want to lead the listener to say to herself, “Gee, what happened next?” Then answer that question. And answer it with tape if possible.

Don’t “step” on your acts. That is, don’t say in your copy what the upcoming act is going to say.

Let the interviewee continue the thought you began. To improve flow and give the copy/tape a feeling for being interactive, look for tape where the interviewee starts with the words “And” or “So” or “That’s because”.

Signposts are critical. Transitions between one thought and a relatively unrelated one are very important in radio. You simply can’t be as abrupt as you can be in print. You need signposts to soften those transitions. Signposts are a sentence or two telling the listener, in essence, “OK, we’ve dealt with that part of the story, and now we’re moving on to something a little bit different.”

Hinge points are the point in the story when you get down to business. Like a signpost, a hinge point is a crucial moment when you change direction. While signposts occur several times in a longer story, a hinge point may only occur once. Let’s say you start with a tease in the intro about the new big thing coming in this story. You start in media res, in the middle of things; say, in the living room where the expectant mother of the first cloned human is knitting booties. You might write first about her—where is she, what she is doing, then who she is and why she is important. You might get into why she chose to do this, and what she’s trying to prove. But at some point, you’re going to shift gears and step back from the action. You leave her and start in with tape/copy about the huge biomedical debate raging around her, which probably might make up the bulk of the story. That point might be called the hinge point. It’s where you say, “OK, here’s what this story is all about. AND these are the reasons it’s important for you to listen to this.”

Avoid “ping-pong.” If you’ve got tape from four people, let each one say his or her thing, then be done with him. It’s difficult for a listener to keep going back and forth between two, three or more people throughout a piece. This is not a hard and fast rule; sometimes you want someone to come back and deliver a riposte. But be careful.

Fundamentals of writing for radio

Use short sentences. We speak with simpler syntax than we write with. Sentences are short. Dependent clauses are rare. The longer your sentences, the harder it is to deliver them in a natural-sounding way — and the harder it is for the listener to follow along.

Metaphors are good, too, but don’t mix them up. My favorite example was when a reporter was describing a company where she’d gone to interview some kids who’d decided against college and chosen to learn data-processing on the job. She called it a “button-down” kind of place. What more needs to be said? But don’t mix metaphors. One I’ll never forget, from a beginning reporter: “The members jockeyed for position before the floodgates opened.”

Similes are to be encouraged, especially when trying to get across complicated technical ideas. But, like powerful medicine, they should be used in moderation, please.

You can address the listener in a direct way—sparingly. That means starting a sentence with the word, “Now”, as in: “Now, this isn’t the only view on cloning within the bioethics community.”

Sentence fragments. We use them in conversation. So why not radio?

There are lots of different ways to present your sound

Teases and back ID. Take a long act, run the first coherent, complete sentence or thought, break in and ID the speaker (briefly!), then let the act finish. But don’t do it too much in a story. You can back-ID without a tease, but the act has to be relatively short…people don’t want to listen to someone for too long without being told who it is.

Butt cuts. Put acts from two different people back to back (the second cut can be a tease/back-ID or simply back ID’d). Butt cuts are great when you’ve got two opposing views and the second element directly addresses the first, as in, “That’s total bullshit and this is why!” Avoid using two men or women who sound the same. It works best if the two speakers are different gender, or at least one phoner and the other live tape.

Vary lengths of acts and tracks. You don’t want Acts 1 through 5 each being 15 seconds, with intervening tracks at 25 seconds each. Your story will sound like it was generated by a radio robot.

Montages. That’s when you get three or four acts, each from different people, and run them together without intervening copy. Requires some inventiveness in identifying them (or not identifying them at all, which is rare but can be done). It’s a great way to demonstrate similarities or differences of thought among groups.

Use ambient sound to set a scene. Scene-setting sound ideally should require no explanation. If a listener isn’t going to realize immediately what the sound represents, you’ll have to help with copy.

Let the sound come in first; then refer to it. As in: “It was an hour’s walk to the beach (bring up sound of walruses) over sole-burning sand and lava rock. When we got there, we found we weren’t to be alone: 200 walruses were in full mating frenzy.” The idea is, you introduce the sound, eliciting curiosity from the listener—“What’s that?” — then, quickly, you identify the sound. This brief guessing game keeps the listener’s attention.

Use as much “active” sound as you can. Generic walrus noise is great, but can we hear the animals in the moment they begin making noise? Let something happen in your ambient moments.

Use ambient sound to shift from one scene to another. Standard examples (and often “radio clichés”) are footsteps, car doors opening/closing, doors opening, keys unlocking doors, walking up or down steps. Be inventive since most of the above have been overused; but it’s great to have that stuff on hand, even a few seconds. It’s also useful when moving from one subject to another in the story; it can work as its own signpost: “We’re moving on now.”

Write to tape. That may sound good, but mean little without an explanation. So here goes: You may start out with an idea of what the story is. But when you get back with all your tape, all you’ve really got is WHAT’S ON THE TAPE. That may be something quite different from what you planned. Go with it—or go back and get more tape, if you don’t believe the people you’ve interviewed.

When you’ve finally got good tape, let the tape direct you…don’t try to use the tape to justify your written story. Choose the tape that 1) tells the story that needs to be told 2) is clear 3) is compelling and evocative. Often, tape that conveys emotion is stronger than tape that’s simply explanatory.

How to edit yourself … before bothering your editor

Read the story aloud, either as you write or once you’ve got a draft. It may sound good in your head but stumble over your lips. It’s a sign that it’s written for print, not radio. This will also tip you off to problems with rhythm and sentences that are too long.

Most importantly… if every part of the story isn’t exactly, patently, transparently, blindingly clear to you… the listener sure as hell won’t understand it.

Finally, have fun! Otherwise, what the hell is the point of doing it in the first place? Remember, the listener can tell when you’re bored.

To give much-deserved credit where credit is due, Chris adds, “Frankly, I learned all this mostly from working with Alex Chadwick and the Radio Expedition crew. Alex was a radio genius. Also from starting out as an editor here with people like Howard Berkes and Renee Montagne to edit, who taught me what to do.”

Chris Joyce was a correspondent on NPR’s science desk.