This is an excerpt of a piece written by former NPR editor Jonathan Kern. It has been lightly edited. 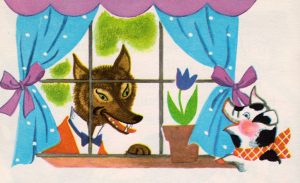 One of the under-appreciated challenges in putting a radio report together is ensuring that the story has a logical structure.  All too often, reporters assemble their pieces by collecting their best tape, and then writing copy that moves from one tape cut to another (usually ending with the cut that is most poignant, or emphatic, or forward-looking, or in some other way sounds “conclusive.”) But a piece that is no more than a collection of good actualities strung together by the reporter’s voice tracks will be much less memorable than a story that unfolds in some systematic way.

Exactly what way will depend on the story that’s being told.

Suiting the structure to the story

The same story can be told in different ways.  In laying out a piece, the reporter should look for a story structure that keeps the listener paying attention. For example, the story of The Three Little Pigs is usually told in straight chronological order – something like this:

There was an old sow with three little pigs, and as she had not enough to keep them, she sent them out to seek their fortune. The first that went off met a man with a bundle of straw, and said to him, “Please, man, give me that straw to build me a house.” Which the man did, and the little pig built a house with it.

Presently came along a wolf, and knocked at the door, and said, “Little pig, little pig, let me come in”…

But if you were given the assignment to cover the case of the three little pigs, you might decide to tell the story differently.  For example, backwards – in reverse chronological order:

INTRO: Animals throughout the forest are celebrating the death of the Big Bad Wolf. The wolf was killed this evening by the Third Little Pig, who tricked him into falling to his death.  __________  has the story:

REPORTER: In the end, it only took a blazing fire and a pot of water to eliminate the wolf that had terrorized the region’s wildlife the last few weeks and allegedly killed two little pigs.  At the time of his death, the Big Bad Wolf was coming down the pig’s chimney, apparently intent on murder. The pig simply took the cover off the red-hot pot and trapped the careless predator.  Police say the wolf boiled to death within minutes.

Or you could tell the story geographically – recounting events according to where they took place:

INTRO: Emergency workers are still cleaning up debris left by the Big Bad Wolf’s destructive rampage through the forest.  ________  has the story:

REPORTER: Only one brick house is left standing in the woods that until recently was home to a thriving pig community.  It was here – on the edge of the forest – that the Third Little Pig brought down the vicious wolf that had allegedly terrorized the neighborhood for weeks.

Inside the modest one-story home, the fire has burned out and the kettle has been emptied of its awful contents.  But the ashes and iron pot at the crime scene tell the story.  As the wolf clambered down the chimney, apparently intent on murder, the frightened homeowner took the cover off the pot and boiled the wolf to death…

One of the most effective ways to maintain suspense is with interrupted action – that is, to start the story close to the peak of the action, but interrupt it to give the needed background information. That way the listener has to stay focused on your story to find out what happened:

INTRO: A woodland community is slowly returning to normal after a Big Bad Wolf terrorized residents for several weeks. ________  has the story:

His brick house was much more secure than the ramshackle stick and straw homes his brothers built.  But now the wolf was coming down the chimney.  The pig figured any attempt to escape was just postponing the inevitable.  So he decided to face his fate – whatever it might be.

Wolves and pigs have long fought each other in these woods. The numbers tell the story:  twelve dead pigs in the last three years; two dozen homes destroyed; hundreds of woodland residents turned into refugees… (Other background info)

By Tuesday night, it came down to one wolf and one pig…

One of the simplest ways to give a story a logical structure is to sketch out an outline (the first part of which is the intro). Do all of the elements relate to the focus of the story? Are there parts that are built around compelling tape but don’t actually fit with this particular story? Some NPR editors like to do “tape edits”; they listen to all of a reporter’s actualities before the script is written to make sure the tape cuts are in some sort of logical order. Taking the time to think and talk about structure – before the reporter starts writing – can actually be a way to save time during the edit.