Writing through sound: A toolbox for getting into and out of your tape 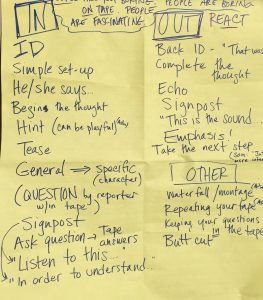 We made this list of techniques for writing in and out of sound at a training session at NPR West.

Note: If you’d like to watch the webinar version of this material, scroll to the bottom of the page.

We make dozens of small decisions while writing an audio story. Many of them pertain to how the reporter/narrator gets into and out of tape. The most common way we write into tape goes something like this:

TAPE: I don’t see how this policy will help the economy.

Basically, that’s “Person X, who has XX job, says Y about Thing Z.” This approach is OK, and sometimes it’s the best choice, but… it’s boring. Especially if it’s the only way you introduce tape. What follows is a list of other ways to write through your sound, to help you bring variety to your stories and make them better-paced and more interesting to listen to.

Getting into your tape

1. “Tease” + “back ID”: When you hear tape first – before you identify the speaker. This is often followed by more tape from the speaker. Like this:

ACT: I was just 10 years old when I discovered I had superpowers.

TRACK: Clark Kent is a journalist at the local paper. But he’s also much more than that.

ACT: I’m a superhero. I do have a day job, but what I’m really passionate about is saving lives.

Teases and back ID’s work best with a relatively short cut of tease tape (<10 secs), so that the listener doesn’t have time to start wondering who’s speaking. They are a good way to:

A note of caution: Teases can confuse your listener if the tape isn’t catchy enough or the voice sounds similar to other voices in your story. Use this technique carefully and strategically.

2. The Hint (often using a particular inflection in the voice, a bit of playfulness, skepticism, or even snark): In the piece below, NPR’s Ailsa Chang uses this technique to suggest what’s coming, with an arch delivery of the word “technically”:

CHANG: In the debate on the Keystone oil pipeline last month, Republicans crowed that they’d voted on more amendments to that one bill than on all the bills on the floor last year. And yes, technically, they did have votes.

3. Question –> Answer: The previous clip also demonstrates another technique for getting into your tape — When the reporter poses a question in her track, and then we hear an interviewee answer the question:

CHANG: So was this the glorious return of regular order?

THOMAS MANN: You could call it what you want. Was it constructive? No. Was it serious about doing something? No.

4. Signpost: When you help to guide a listener within a piece. A signpost can take many forms:

SPIEGEL: Jason’s heard from a teacher in Colorado, a massage therapist in Budapest, a computer programmer in Japan and even a widowed Russian grandmother. She’s using rejection therapy to pick up men.

5. Set-up (general) –> explanation (specific): When you set the table for the tape by offering brief thematic description. Here’s an example from a piece by NPR’s Scott Horsley:

HORSLEY: His mother, Diane Foley, told ABC the U.S. government offered little in the way of information or support.

DIANE FOLEY: We had to beg. We were an annoyance, it felt at some level. You know, they really didn’t have time for us.

6. Begin a thought and let the tape complete it: This is a great way to tightly stitch together a reporter’s track and the following tape, by making them two parts of a whole thought. For example (from this piece by NPR’s Cory Turner):

TURNER: Eighteen-year-old Alicia Henry arrived at Scavo a year ago as a sophomore behind in credit. Now…

ALICIA HENRY: I could have graduated this year, but I chose not to.

Getting out of your tape

1. “That is the sound of…”: This is a kind of signpost, pointing the listener to the message they should take from the tape they just heard. NPR’s Ailsa Chang does this beautifully – as a gotcha! moment – following this montage of sound:

UNIDENTIFIED MAN #1: The amendment is not agreed to.

UNIDENTIFIED MAN #2: The amendment is not agreed to.

UNIDENTIFIED MAN #3: Under the previous order requiring 60 votes for the adoption of this amendment, the amendment is not agreed to.

CHANG: This is the sound of dozens and dozens of amendments dying after requiring weeks of debate on a bill that the president says he’ll veto anyway.

2. React: Sometimes tape demands a human response. The audio is angry or sad or profound. Just moving on to another thought would be too abrupt. A reaction can be simply in the reporter’s voice, or it can actually be a written out statement (“Joe Blow sounds angry, and he is. He says that’s because…”).

Reactions can also be humorous (yes! you can be funny!), like in this piece by NPR’s Shereen Marisol Meraji, when she corrects a group of soccer fans:

3. Echo: When the reporter repeats a word or phrase from the tape, and builds on it. Here’s an example from a piece by NPR’s Kelly McEvers. Notice how she echoes the word “outspoken”:

JIHAD TURK: The overwhelming majority of Muslims on the planet – and Muslims make up about a fourth of the world’s population – find what the Islamic State’s doing as abhorrent, as against our values and our teachings of our faith and are outspoken about it.

MCEVERS: Outspoken, he says, in languages other than English, which is why you might not be hearing them.

4. Take the next step: When the reporter builds on or expands what someone has just said. NPR’s Sam Sanders does this nicely in the excerpt of this piece below, when he says, “Just more intense.”

SANDERS: Michelle Figueroa is a spokesperson for LA’s Department of Water and Power. Twitter is one of her office’s newest tools in fighting water waste. LADWP has a Twitter account, and they track reports sent to them there.

FIGUEROA: The social media version of folks calling in on their neighbor.

SANDERS: Just much more intense. If you search Twitter for the hashtag #DroughtShame or #DroughShaming, you’ll find hundreds of very public reprimands, often with pictures and video and lots of addresses. A private phone this is not, but wait, there’s more.

5. Emphasize/repeat: Tape whizzes past listeners’ ears, sometimes too quickly to catch. If a reporter wants to make sure the listener heard something or underline its importance (or its absurdity), he/she can repeat the tape or add emphasis.

Sam points out something absurd here (this in the clip above):

DAN ESTES: Full name is Dan Estes and I’m the developer of the DroughtShame app.

SANDERS: Yeah, there is a drought shame app.

6. Complete the thought or sentence: When the tape tells only part of the story, and the reporter picks up where the tape leaves off. As in this piece from NPR’s Robert Smith:

FLAMMER: They don’t want to talk about that.

SMITH: Because, Dominik Flammer says, the story of the Swiss Cheese Union is a cautionary tale about the abuse of power and fondue.

Other interesting ways to use tape

Montage/waterfall: These are great way to demonstrate variety or sameness of opinions, repetition, or common/shared themes.

Keep your questions in: Why only hear the reporter in a sterile studio, when we can also hear you in the field talking to people? Keeping your questions in can achieve lots of things, such as:

The “butt cut”: Let one piece of tape be followed by another, breaking up the track-act-track format. Butt cuts are great for indicating contrast, transitions, or agreement. (But they come with the same note of caution as tease tape: If the voice or idea isn’t distinct enough, you’ll just confuse your listeners.)

Repeat your tape: Play the tape again, to give your listeners a chance to hear it closely and take deeper meaning from it.

This excerpt from NPR’s Alix Spiegel does this beautifully. I’m not transcribing it; it only works for the ear. So listen!

This list of techniques was built with the help of journalists at WAMU and member station education reporters during trainings sessions in June 2015. Thank you!

Writing through sound: The webinar version!

Here is a one-hour presentation of this material, from September 22, 2015.

Writing Through Sound (9/22/15) from NPR Editorial Training on Vimeo.