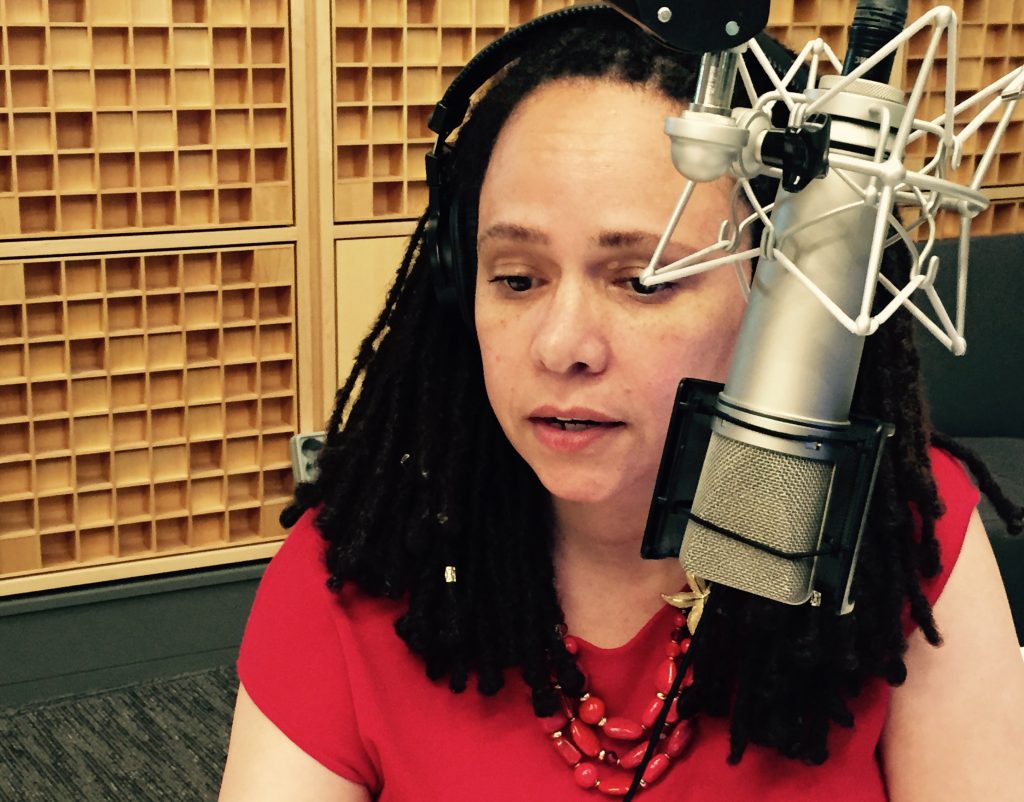 Korva Coleman has been an NPR newscast anchor for 25 years. She originally compiled these recommendations for PRNDI’s 2015 conference in Salt Lake City. They are intended for any public radio newscaster, in big markets and small.

1. Prepare yourself before you get to work

What news do you listen to? What websites and newspapers do you read? All of these can help you prepare to write your daily newscasts, even before you walk in the newsroom door.

It’s helpful to follow news sites on Twitter, such as AP, Reuters and BBC Breaking News. What’s in your Google or Yahoo! News feeds? Are you following major newspapers, such as the New York Times or the Chicago Tribune? These sources can provide you with breaking news of the day, along with feature stories that explain events.

Other news sources worth following:

When you arrive at work, be sure to sketch out a story list for yourself from your news sources. What’s a lead story for your region? Is there a local angle to a national story? Are there stories that will happen later in your day that you want to make sure you don’t miss? A story list will help narrow your focus. It will also remind you of stories that may have a later start time, such as a planned news conference or reports that are scheduled for release.

The first stories are leads, such as the severe weather and the Senate taking up trade legislation. There’s a kicker about a solar storm. And there’s a reminder that the Labor Department is going to release its report on durable goods orders at 8:30 AM Eastern.

You can pick and choose items from a story list, in order to spread out your writing over the course of a morning. It’ll save you time. Honest.

Here are some other things to consider as you develop your list:

Now that you’ve briefed yourself from a number of news sources and prepared a story list, you’re ready to start writing. “Readers” are copy read by the newscaster; no reporters or tape are included.

Start with source copy, such as wire stories from the AP or your organization’s journalists. As you read, ask yourself questions. What are the key points of the story? What are the secondary facts? Most important, what facts can you safely leave out of any news copy you write, and still clearly inform your audience?

As you compose, write short sentences and load the key facts on top. Secondary facts should be lower down in the copy. Give yourself an exit or two from the story before it’s finished, in case you run out of time in your newscast. You need to give yourself room for flexibility once you’re on air.

You can see (and hear) an example below — in a reader I wrote about an attack on the Afghan parliament: 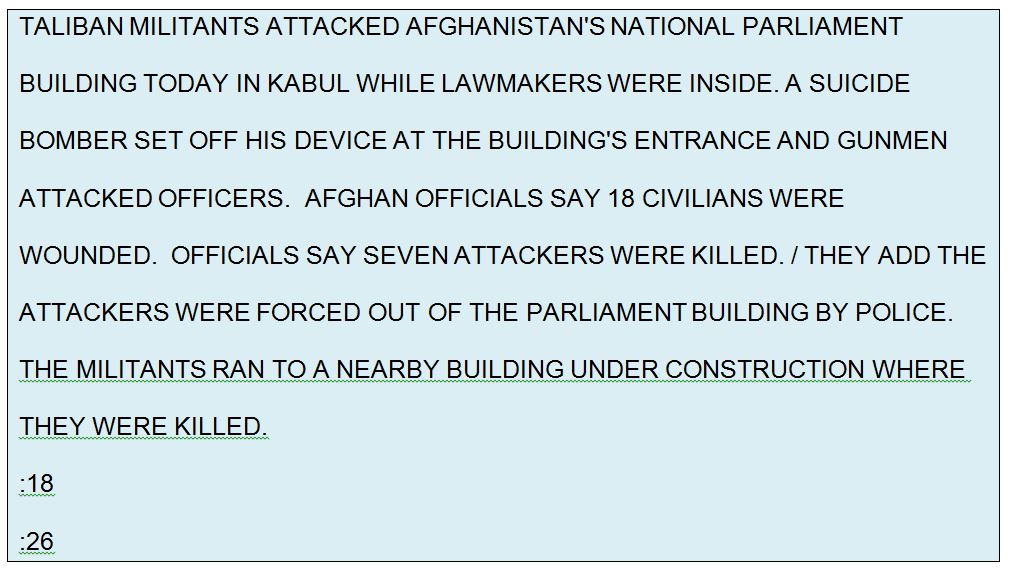 Notice the “/” in the copy above. That’s an exit point, where I could end the reader early. And I’ve timed both the entire reader and the shorter version, which is what the “:18” and “:26” refer to at the end of the copy.

This brings up a vital item. ALWAYS READ YOUR COPY ALOUD FOR TIME. Your “read time” is different from anybody else’s. When you’re writing for your own voice, you often think about how you’ll stress a particular word or phrase. Other people will stress the words differently than you do, so it’s important to know your own read time. When you’ve timed your copy, write on the script the number of seconds it takes to read it.

This can also help in an emergency. If you’re in the studio and one of your stories suddenly becomes outdated, you can easily pull it, knowing you’ve already written other stories with additional copy in them. You can read the longer scripts you’ve already prepared and fill out the rest of the time in your newscast. No need for panic!

If you have access to audio, you may want to include sound in your copy. The process is the same as for writing a reader: find the key points of the story, the secondary points, and the points you can safely leave out. When reviewing sound, listen for the clip that illustrates a key fact or sentiment. And make sure the audio adds to the story, rather than repeating something already in your copy.

Here is an example I drafted in June 2015, a write-around about the Charleston church shooting: 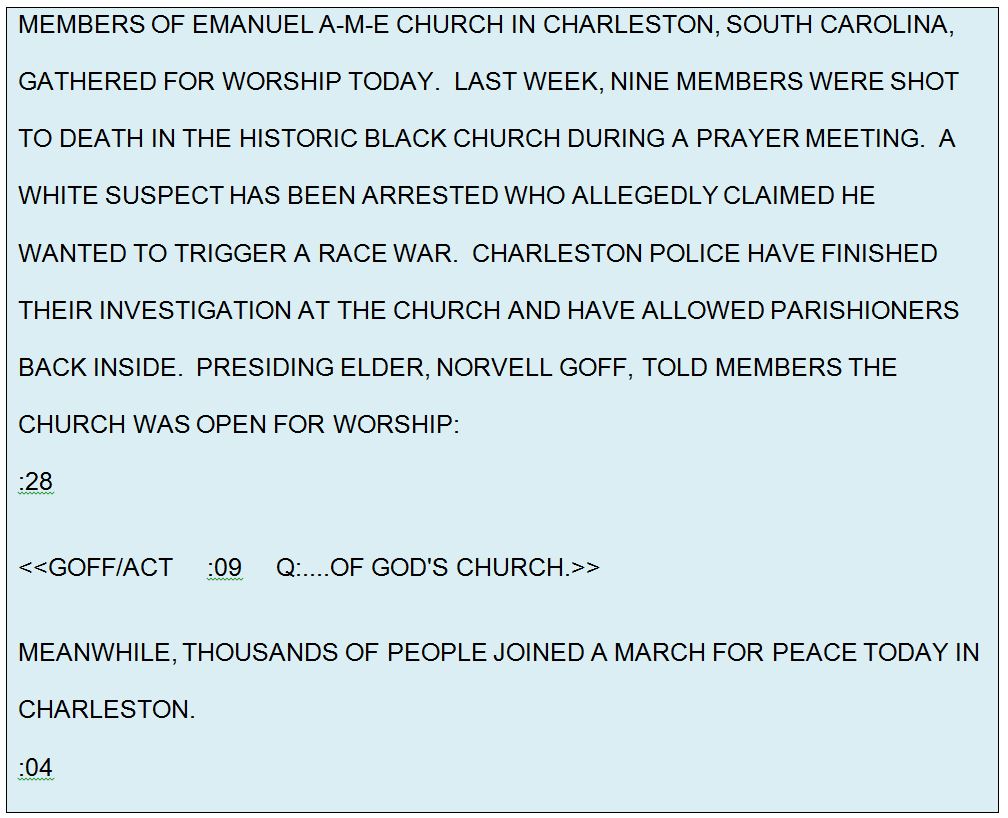 5. Putting it all together

I spend about 90 minutes preparing copy before going on-air. Once the writing is done, it’s time to finalize your story lineup. Because you have timed everything, you can easily decide if you want to read the longer version of your scripts or the shorter versions. 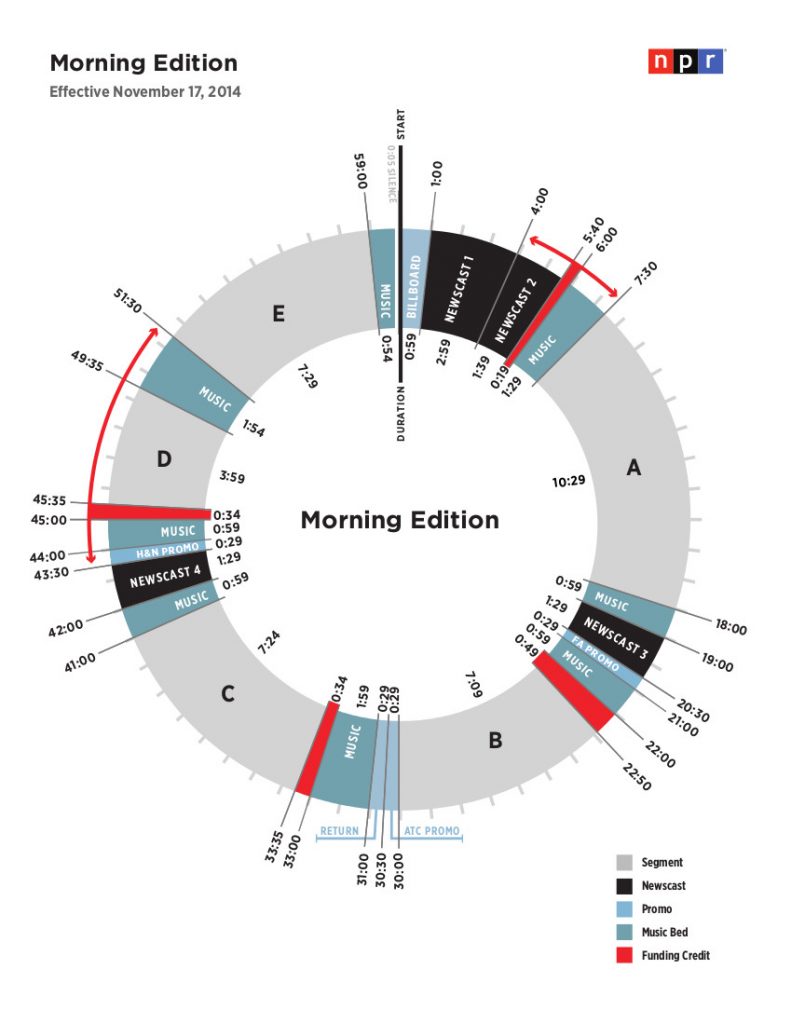 This provides you a lot of flexibility – you can have several shorter stories in a newscast, or mix short and longer stories together. You can have a lot of audio, one clip or none at all. If there’s a lot of news to tell, choose several of your shorter scripts. You can always read the longer version of your stories in a later newscast for variety.

All told — including reporters’ spots — on a given day, I use at least 30 stories in my newscasts. (That includes multiple versions of the same story.)

How many stories should you put in a single newscast? Let’s say you’ve got a 2-minute newscast (like, in the Morning Edition clock image at right, the grey-blue hole that says “MUSIC” at the bottom of the hour).  Local newscasters could choose 4 to 5 stories to read, including audio. However, that’s not a fixed rule. If news is breaking there may only be one story, and the newscaster may choose different angles of the story to tell.

If news is slow, it may be appropriate to read two or three long scripts for a short newscast. Don’t be afraid to mix it up. Try reading 5 stories in one newscast and 3 in a different one during the same news shift.

If I make a mistake or stumble over my words, I just say “Rather…” and then pick up and read the sentence again. It’s not worth trying to hide the fact that you stumbled; we’re all human! Acknowledge it and move on.