Active sound: How to find it, record it and use it 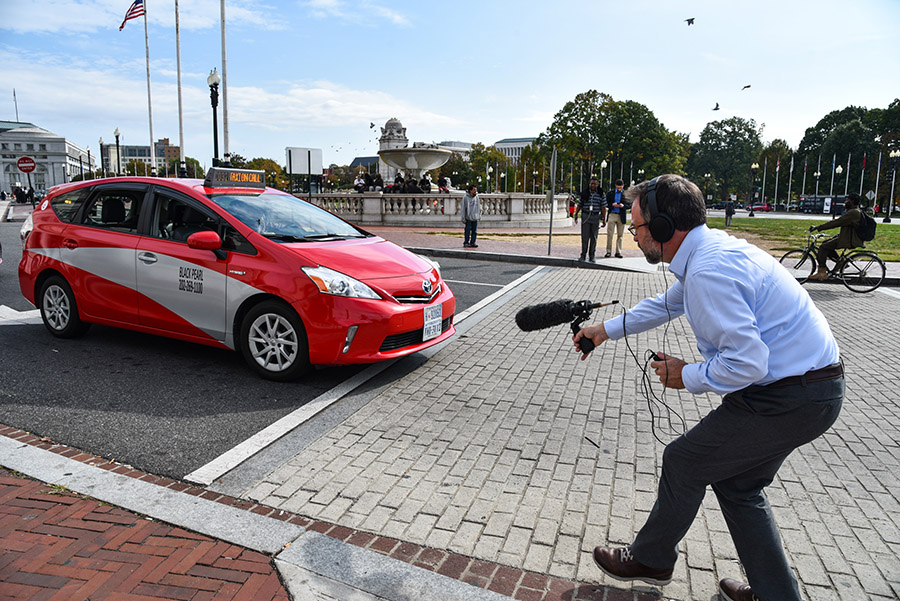 This guidance comes from an NPR seminar by Robert Smith and Jeff Rogers in March 2002. It is just as relevant today. Many of the ideas and advice were provided by Terry Fitzpatrick, Howard Berkes, Jonathan Kern, Sora Newman, and the APRN Focus News Workshop.

Active sound makes a report sparkle. It is sound that isn’t stuck in the background. It’s up-front. It shows character and action. It turns a script into a story — because within active sound, something happens. The audience may soon forget what you and your actualities have to say, but they will remember being in a place and hearing something for themselves.

How to find active sound

Before you go into the field:

Anticipate events. Talk to your subjects before you go into the field. Ask them when something is happening and go at that time. Ask them what the place sounds like. Ask them if the players can be there when you arrive.

Think about equipment. Will you be far away from the action? Bring a shotgun mic. Will the subject be moving around? Perhaps a lavaliere mic will keep them on tape. If you’re outside, remember an umbrella and wind-screen.

Fantasize about the perfect tape. Think about what would be really cool in the story and look for it when you are in a scene. Luck favors the prepared ear.

When you are in the field:

REMEMBER:  Places don’t make sound. Actions do. Look for people DOING something and get it on tape.

Listen for sound events that mark a moment. Instead of a motor running, get it starting or stopping. Get the opening and closing of doors. Get the transition between a quiet room and the noisy world outside. Instead of general traffic, get one distinct car. Just as writing is in the details, specific sounds are better.

Know when to get involved — and when to shut up. Don’t intrude on real interaction in the field. Do create interaction if there’s none occurring naturally. You can talk to people and create scenes with your own interactions.

Be aggressive. Don’t be afraid to participate in the story. Ask questions. Kick the tires. Be the surrogate for the listener. Be real and be there!

If the scene is quiet … then the people will have to be the sound. Look for human moments. Laughter. Sharing a story. The sound of someone changing their mind or getting interrupted by someone else. Make your characters describe the scene.

Don’t settle for the stereotypical sounds. The school bell, the traffic roar, the person answering the phone are used a lot. Listen deeper. Which particular sound is unique to a place? Which action furthers the story you’re telling?

How to record an active sound

Now that you know what you want, make sure you bring it back alive.

Don’t just stand still. You can “zoom” the mic into an action. You can pull away. Picket lines, protesters chanting, food booths and phone rooms are good places to keep the microphone moving so you get bits of different people.

Always mic yourself when you are asking or trying something. You never know when you’ll need it.

Deconstruct the scene. Try and isolate individual elements – a bird overhead, water flowing, twigs underfoot – these can be used in the clear or mixed in the studio.

Watch out for music. It is very difficult to cut tape that has even soft music in the background. Record the scene with music and then ask them to turn it off for interviews.

And because we can never be reminded enough …

THE TEN COMMANDMENTS OF RECORDING

Thou shalt always get a minute of ambience.

Thou shalt not walk on the end of sound bites.

Thou shalt always wear your headphones and keep them holy.

Thou shalt not interview people with music playing in the background.

Thou shalt always have the person say their name for proper pronunciation.

Thou shalt check thy tape before thy departure from the scene.

Thou shalt get another minute of ambience … just in case.

How to write with active sound

Escape the acts and tracks formula. Think creatively. Break up the pattern. Surprise us.

Bring sound to the foreground. Think of it as important as your voice and the characters in the story. News is about action… so the action sound should be central to the story.

Try to get the best sound/scene up top. It gives the audience hope for an interesting story. But don’t put ALL the sound at the beginning. Save something for the listeners who work hard to get to the end.

Drop “gold coins” along the path. Put something interesting every 60 seconds or so…whether it’s an action, a new scene or a nice bit of writing. Keep them listening.

Not every part of a story needs sound. Sometimes running sound under an entire piece can dilute the value. It’s often better to leave a scene and then return.

Write to your tape. Don’t just plop it in, or fade it up. Listen while you’re writing. Include sound in your edit. Think about where the sound was recorded. How did the place look, smell, feel? Don’t describe in generics – often one interesting detail is more powerful.

Beware starting with ambience. This has become a bit of an NPR stereotype and the pet peeve of many editors. In general, only start with sound if the ambience is distinctive, core to the story and set up well in the intro.