7 strategies for engaging your podcast (or show) audience

Editor’s note: Although the advice here is aimed at podcasts, it is equally applicable to shows.

One of the first projects assigned to me as a product intern was to assess audience behavior and levels of engagement with NPR podcasts on social networks. I focused on Facebook, Twitter, Tumblr, iTunes, reddit and YouTube. The podcasts with higher levels of engagement (likes, comments, shares, etc.) tended to be podcasts that have discussion-based content, as opposed to story driven content. This is not a rule, just a notable tendency.

I caught up with Jessica Reedy, producer of Pop Culture Happy Hour, Cedric Shine, social media manager for Microphone Check, and Kiana Fitzgerald, digital editorial assistant in our programming department, to get their perspectives on managing their social media presence for podcasts.

Social media is a space to have conversations

Although it may be easy to write off a social media account as just a place to post links to new episodes, it can be something much more than that.

“For some people, [social media] isn’t their thing,” said Cedric. “It’s probably better if you have someone whose thing it is. You can’t half-ass your digital representation. If you don’t have a good digital representative for a podcast, you’re shooting yourself in the foot. We’re creating a great show, but if nobody hears it, then why are we doing it?”

Why is engagement so important? Those in the podcast profession are referring to this time as the second golden age of audio. Podcast audiences are growing and gaining traction. Companies like Gimlet Media and Radiotopia are bringing new energy to the format. To maintain momentum and relevance in an increasingly crowded digital marketplace, podcasts need to construct relationships with the audience that go beyond merely listening to a show once a week. If you want an example of a contemporary artist who has a very close relationship with her fans (who give support when she asks for it), look no further than musician and social media queen Amanda Palmer.

Managing your social media should be a habit, not a job

It may seem straightforward to hire someone to exclusively manage your social media. But it’s crucial that this person thoroughly understands the personality and culture of the show.

As Cedric from Microphone Check said, “As far as a point person, I think you need someone dedicated to the show, who’s in the culture of the show and is able to speak that online.” He added, “But I’m addicted to social. That’s just what I do. I might post in the middle of the night. Why? Because people in the morning check their phones and they’ll see it. You can’t look at this like a job.”

Up until a month ago, Pop Culture Happy Hour had no official Twitter account. Interaction with their audience took place through the hosts’ accounts. When they recently launched an official Twitter account for the show, the hosts asked their followers to follow it. Jessica Reedy tells us how she manages the account: “With our new Twitter account, it’s more integrated into my day. I have Tweetdeck open at my desk, so I can see if people are writing to us and I can respond appropriately.”

Involve your hosts in audience growth

If your hosts have a substantial following on either their public Facebook page or Twitter account, consider having them play a larger role in your show’s social presence. They can create a post on their own page and tag your show’s account in that post. Microphone Check has been utilizing host Ali Shaheed Muhammad’s Facebook page by linking to interviews there, writing a caption and tagging the show’s page in the post. 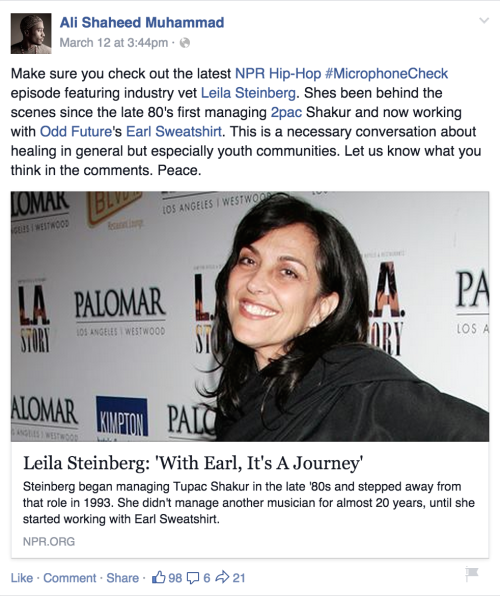 On Pop Culture Happy Hour episodes, hosts encourage their listeners to engage in discussion on the show’s Facebook and Twitter pages. This method may not work for every show. But if you have a topic that you think has the potential to generate discussion, it’s a relatively simple way to get things going.

Respond personally to your audience

If your fans are familiar enough with your hosts or producers, consider having them respond to audience discussions and questions online. As Jessica Reedy said, “I want the commenter to know that a person is responding to them.” 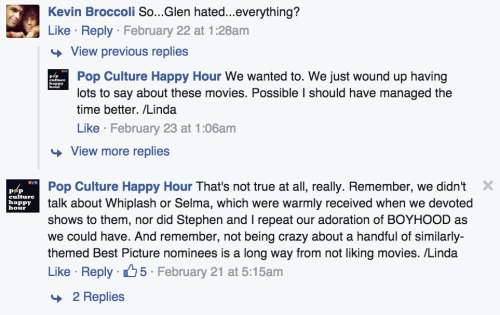 The voice of the show should match its online presence

One of the biggest challenges of running an official social media account is finding a voice or style that your audience will respond to. While there isn’t a single strategy that works for everyone, it’s important to be authentic.

“I’ve worked in places where every tweet would be edited by four people before it went out,” said Jessica Reedy. “It’s one thing to have good news judgment, but … we also don’t overthink it too much.”

Do your best to understand your audience and create content that resonates with them. You’re not trying to please everybody. You’re trying to bond with your show’s audience.

As Cedric explains, “The other day, we had Big Sean on the show. Big Sean is from Detroit, he says, ‘Whattup doe.’ So we’re tweeting it out, we’re putting in the quote and photo, and we get a little Big Sean in there, a little Detroit. All caps, from NPR. People like that, they feel that.” 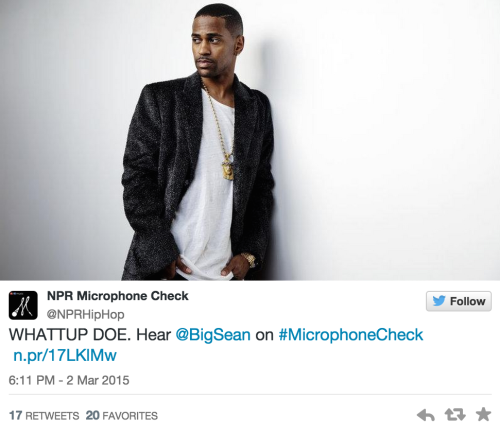 Know what social networks work for your brand

If you’re trying to decide which social networks to focus on, it’s important to consider how your show’s identity and audience will match up with the existing communities out there.

As Cedric said, “You have to know what channels work for what you’re doing. If this was a podcast about decorations and home living, we’d be on Pinterest. But we’re not, so why would we have a Pinterest?”

Kiana Fitzgerald manages Invisibilia’s social media presence. For her, developing the voice of the show online was challenging because the show was new. “As time went on, I tried things that I wouldn’t have initially. It became easier to take on a playful voice at times. There was a point where Alix [Spiegel] said in the show, ‘It’s a snake in a sock.’ So I made a quoteable and put in on Facebook and Twitter; they were both widely shared and appreciated. And I knew I could play around with this.” 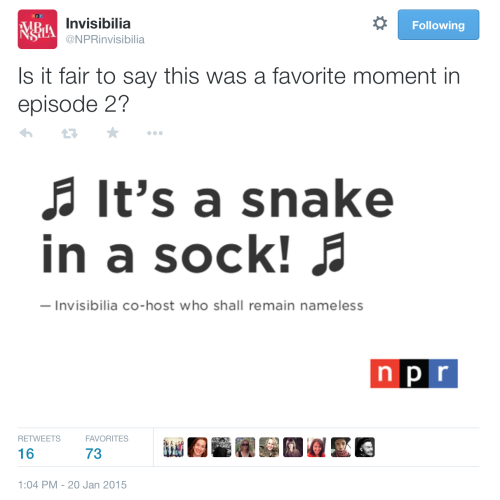 Daniel Peterschmidt was an intern with NPR’s product development team. A version of this post originally appeared on NPR’s Social Media Desk Tumblr.