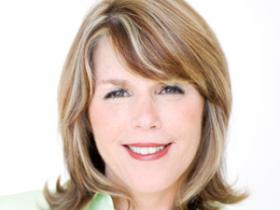 Kerri Miller shared her tips and thoughts on using social media in her role as a former host of the now-defunct MPR show The Daily Circuit.

Kerri Miller tweets several times a day asking questions related to her broadcast, about the latest books she’s reading, and more to over 15,000 followers.

She said that although it took a while to fit social media into her schedule and to figure out what to tweet, it is now an integral part of her job.

Here are her five tips to other public radio talk shows:

If you missed a moving and helpful convo about suicide w/Jennifer Michael Hecht–I urge you to listen. http://t.co/vt3slVYnw9

And that’s ok. “There are plenty of people that interact with me on Twitter that don’t listen real time — they either don’t get to the show at all or listen at the end of the day,” Miller said. With that in mind, Miller recommends share interesting moments, quotes or facts from the day’s show at different times, and to tweet a few times in the evening. These are different audiences, and a great way to get more people into the show is to tweet the most shareable and digestible moments at various times.

I’m writing a show about extreme cavers and just writing about it is giving me the willies. Dark spaces filled w/bats. No-o-o-o! — Kerri Miller (@KerriMPR) May 14, 2014

Twitter is an extension of Miller’s voice on air. It should all feel seamless.

“It’s not that I forget that it is going out as via MPR,” Miller said. “But that doesn’t mean I have to be stodgy about it. I may be a little more confiding on Twitter, but I also don’t hesitate to write a script that’s personal — that’s my demeanor on-air and on Twitter.”

3. Find time to fit social media into your workflow

We all know the time for social media won’t magically appear. But finding time to fit it in can benefit you — The Daily Circuit regularly found story ideas, guests and comments via Twitter. Experiment with different workflows and tools to find the right fit for you. Miller uses her iPad in the studio to take in what people on Twitter are saying and to send out questions and links, with the help of The Daily Circuit’s social media host Stephanie Curtis. Tools such as HootSuite, Tweetdeck, Buffer, and IFTTT can be used to schedule tweets, and using Twitter lists can make time management easier.

4. Do more than just promote the show

Constant entreaties to “listen in” will probably not drive much conversation or new audience on Twitter, Miller said. She won’t even use the word ‘follow’ when mentioning her account on the air.

“Follow sounds like a very one way relationship,” Miller said. “Twitter is one way to break down walls and make the audience feel like this is a real, circular, interactive relationship. I can know about people’s lives and they can know about mine.”

Instead, Miller says things such as “if you want to reach me” or “if you have something to say that I need to hear.”

5. Let your audience know how you think — not just what you think

Thanks for reading my tweet on air in spite of it having a typo, @DailyCircuit! Whoops! *love

Stumped for ideas of what to tweet? Sharing insightful thoughts, questions and comments that show your personality helps build an audience that want to join in a conversation.

“You can share where you go, things that are cool, what you read … it adds to a fully dimensional type of person,” Miller said. “Those are the people that people can connect with and Twitter connects with. This is an intimate medium — they want more than just some faceless being.”