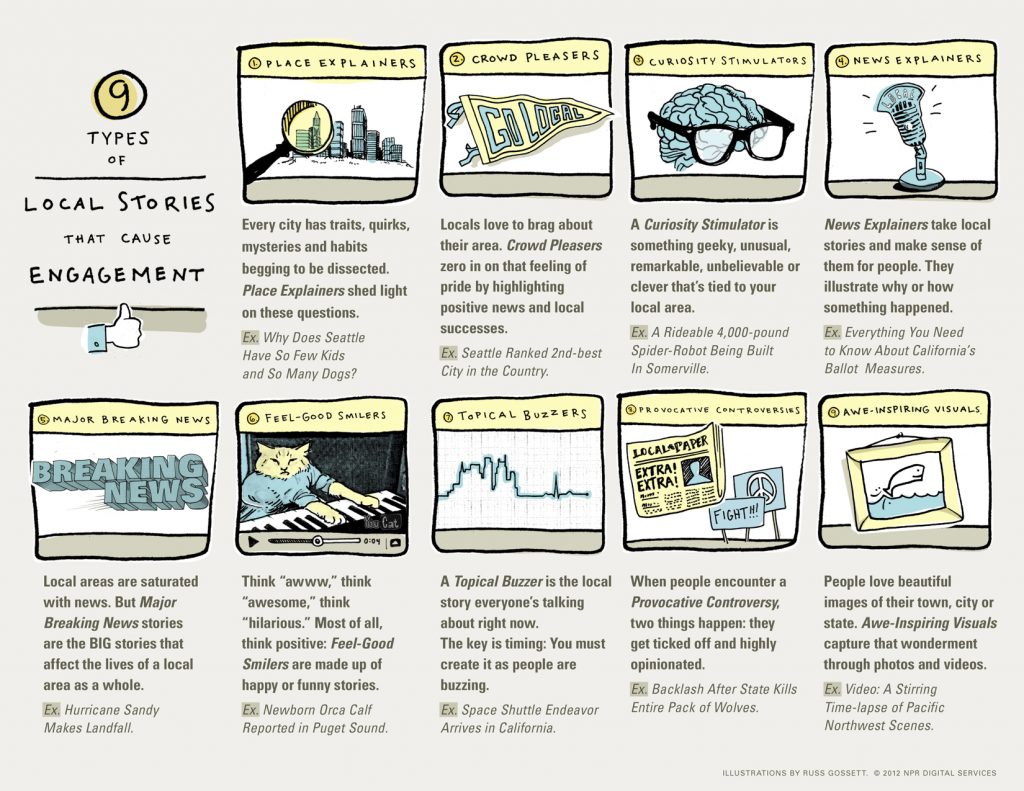 When you come across a story about your town, city or state, what makes you want to share it?

In this post, we walk you through the “9 types” and provide examples. We also share some ideas of how you can use the 9 types in your newsroom to plan coverage and help your stories reach more people.

Before you go on, don’t forget to download and print a pdf graphic of the 9 types.

Every city has traits, quirks and habits that are begging to be dissected. These characteristics are well-known to locals, but no one ever stops to explain why they even exist in the first place. Place Explainers investigate, answer and explain these questions.

KPLU (now KNKX) epitomized this type with its I Wonder Why…? series, which explores the “endearing, odd, even irritating” attributes of the Pacific Northwest. For example, why does Seattle have so few kids and so many dogs?

We all love to brag every once in awhile about the area we call home. Crowd Pleasers zero in on that feeling of pride. These stories provide an opportunity to celebrate everything from beautiful weather in the Pacific Northwest to the athletic prowess of California athletes.

You know those stories you come across that you can’t turn down? The ones that have you hooked at the headline? Curiosity Stimulators get that a lot. It’s the type of story that captures a geeky and quirky side of a city. And after people click through and read a Curiosity Stimulator, they often feel compelled to share it because they get the sensation of stumbling upon a local gem. The Curiosity Stimulator is a 4,000-pound spider-robot named Stompy. It’s a woman who married a corporation. It’s the discovery of a hidden video game city.

Event-based stories chronicle the news of a city. This bill was passed. This person was hired. That person was fired. News Explainers make sense of the news. Rather than just telling you what happened, News Explainers dissect why or how it happened. For example, here’s what people in Washington should consider before possessing legal marijuana.

Cities are saturated with everyday news stories such as traffic jams and fires. But Major Breaking News has a much bigger impact on a city or a region. Massive storms are an easy example of this because they tend to make life difficult for entire regions. But Major Breaking News doesn’t happen often – a few examples from stations include Hurricane Sandy and the approval of legal recreational marijuana and same-sex marriage in Washington.

Think “awww,” think “awesome,” think “hilarious.” Most of all, think positive: this category is made up of happy stories. A Feel-Good Smiler is the birth of an animal that locals love (Seattleites, apparently, are obsessed with orcas). It’s a nighttime Austin marriage proposal that found its way to Reddit. And is there anything more feel-good than warm cookies delivered by bicycle to your door? Humor, which tends to make people feel good, also plays a role in Feel-Good Smiler content. Cue Seattle’s Colonel Meow.

A Topical Buzzer is the story of the moment that everyone’s talking about locally. When the Space Shuttle Endeavor flies overhead, a Topical Buzzer shows you photos of it. When Will Ferrell and Zach Galifianakis serve coffee at a local cafe (and mobs of locals pack the streets to catch a glimpse), a Topical Buzzer rides the viral coattails of the story. The key to deploying a Topical Buzzer on your site: knowing when something is beginning to buzz and not posting it after everyone else already has.

Have you ever come across a story about your city and you could feel your blood beginning to boil? That’s usually what happens when people encounter a Provocative Controversy – they get ticked off and highly opinionated. In Washington, when state officials killed a pack of wolves, locals had a lot to say about it. KQED’s story about the California State Parks Department sitting on a $54 million surplus for 12 years has dozens of comments. In Boston, a story about a doctor refusing obese patients elicited Facebook comments such as “SOOOO ANGRY !!!!” and “Shame on them.”

“Whoa…” You know that feeling? It’s the feeling you get when you see a killer whale catching air in Puget Sound. When you’re spooked by the images of a 75-year-old L.A. hotel wing. When you look into the cold dark eyes of sharks swimming in Cape Cod. When you’re haunted by a people-less time-lapse of Seattle. We already know people like to gaze at beautiful images. People love to goggle at beautiful images of their city. Awe-Inspiring Visuals capture that wonderment through photos and videos.

Ideas for the 9 types in your newsroom

In the years since we published the original “9 Types,” we started noticing it pop up in station newsrooms. We were thrilled, of course. We also noticed some creative ways journalists were using the framework to think through their coverage. 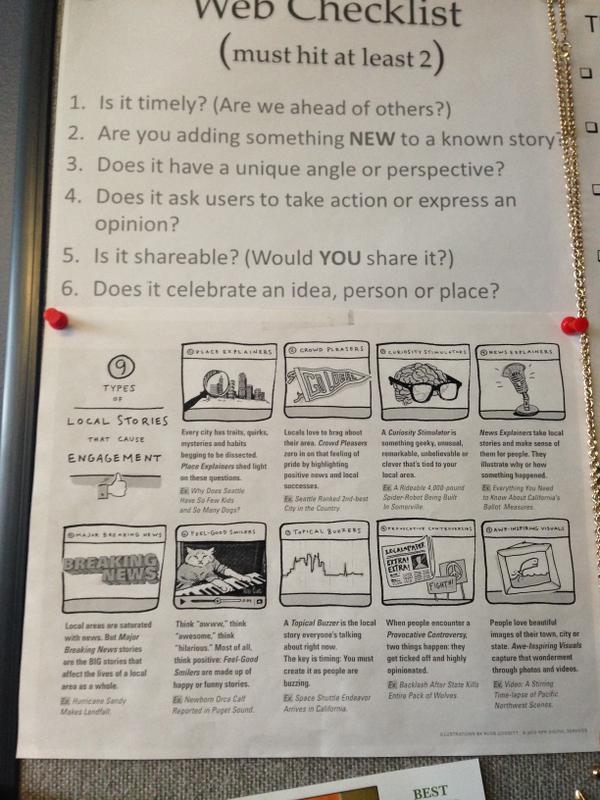 Add the handout to your bulletin board, like WNPR in Connecticut did here.

Not every story needs to be built out online. Instead, you can use the 9 types to figure out what stories are worth putting a little more time and effort into making them more shareable and interesting to the online audience. 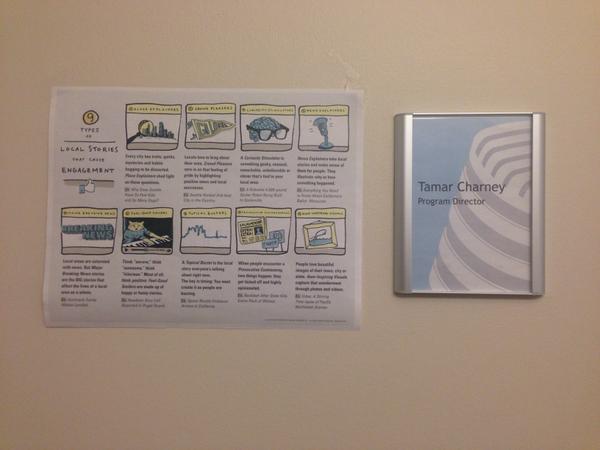 The 9 types handout makes an appearance in the halls of Michigan Radio.

Use it as a framework for brainstorming coverage angles

When discussing story ideas, use the 9 types as one way to brainstorm various coverage. Let’s say you’re working on a story about a proposed tax. Take a look at the 9 types and try to come up with headlines for the different categories. You might discover a new approach you wouldn’t have thought of otherwise. 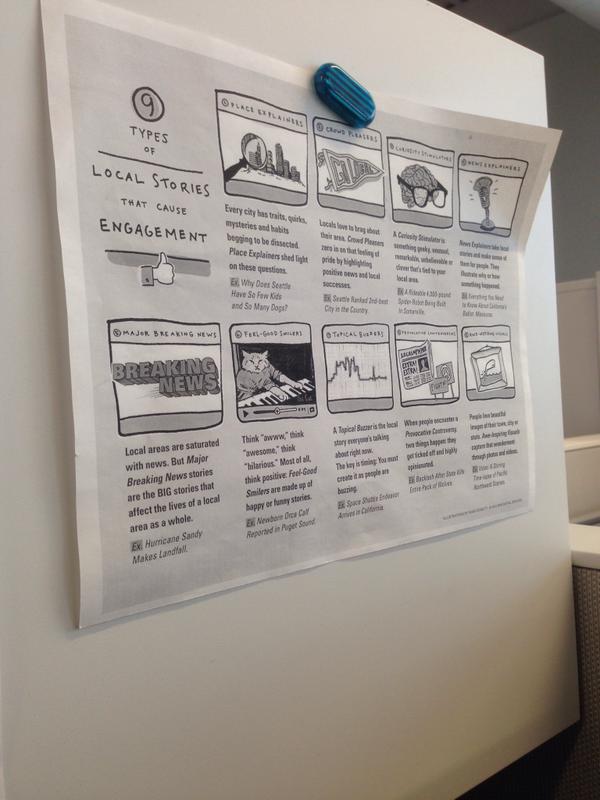 The 9 Types handout on a cubicle wall at St. Louis Public Radio.

Use it to think about the audience

When you’re creating stories for the web, the audience should be part of the conversation. Who cares about this? Why? What are the implications of this for them? The 9 types can help frame a conversation about your stories — and the people who will care most.