For scenes to succeed in any medium, they have to engage your senses. You smell the diesel fumes, feel the breeze on your cheeks, hear the anger in the collective voice of a crowd of protesters. These appeals to the senses are important, but often secondary to the story.

In radio (or audio, as we increasingly say in our changing industry), scenes are not secondary. They are the centerpieces of much of our best storytelling. And so we constantly seek scenes that capture the main points we’re trying to convey. The more show, the less tell required, the better; because honestly, listeners are more likely to tune out during the tell.

But the best scenes are really, really hard to capture and transform into good storytelling.

Let’s take neighborhoods as an example. At NPR, we often seek ways to illustrate news, policy issues or trends in the lives of real people. So we go to where they live — to their neighborhoods. And you can imagine the easy clichés we record there: cars passing on the road, kids playing, barely-audible birds tweeting.

What’s more difficult is transcending the clichés. Here is just a sampling of ways NPR journalists have done that.

Sometimes the writing does the trick

At the opening of this story from Cuba, you can hear the hubbub of a busy Havana street. That “ambient sound” is important, but…

… it’s Robert Siegel’s writing that knocks this one out of the park:

This is a scene
cruising minus the cars
clubbing minus the money to get into the clubs
It’s a scene with smartphones
minus the smarts
They have no connection to the web.

The first 30 seconds or so read like a poem, a jazzy riff filled with detail, rendered with rhythm. That combination of visual description and rhythm makes ears and brains happy! So while you can’t have a scene without sound, sometimes what brings it to life is your own narration.

This story demonstrates how sound creates three-dimensional images: a screen door opening onto a lively street, a woman in the background calling to another in the foreground, the squeak of children bouncing on a trampoline.

The audio was recorded by the late Bill Deputy, who intimately understood the science of stereo. The street, in Belzoni, Mississippi, is filled with wonderful characters, and you can hear the richness of their voices both on mic and in the distance. If you close your eyes and listen, you can see these people and this neighborhood as if it were all around you.

(A disclaimer of sorts: I produced this story back in 2006, and now that I listen to it again, I wish we’d begun the story with a scene rather than spending six of our 12 minutes explaining the premise. As interesting as the premise is, nothing draws in the audience in like a textured scene!)

One of my favorite ways to depict a place is to plot a route through it. Just two days after a tornado tore through Joplin, Missouri in 2011, Frank Morris of KCUR did just that.

He had no shortage of scenes to illustrate. He could have talked to any family on any street piled high with rubble, and it would have been evocative. But he did something even smarter: He created an organizing principle by traveling the seven-mile path of the tornado itself.

Here’s how Frank described it to me in an email:

Figuring out how to best organize stories is hard work. But you can skip that whole part, if you’ve got a timeline or a geographical path to follow. Especially on deadline, with all the other remote filing-from-a-disaster-area stuff to worry about, having the outline already in place is really great… If you’ve committed to an outline, then you can really concentrate on the connective stuff, the standups and bites you need to move from one place to the next.

Frank’s approach gave the story a natural beginning, middle and end and a constant sense of movement. For the listener, it created a mental map of Joplin and its destruction. And for Frank, it helped him meet his deadline!

Too many scenes are mediocre because they are predictable. Beside a road? Here’s sound of cars passing. At a school? Here are kids playing on the playground. In a war zone? Bang! Bang! Boom! (OK, well, explosions are always pretty striking.)

Sometimes the unexpected is what brings a neighborhood to life. In this story from Izmir, Turkey, foreign correspondent (and now, All Things Considered host) Ari Shapiro describes some typical activities of a coastal vacation town: fisherman, cyclists, a wedding. 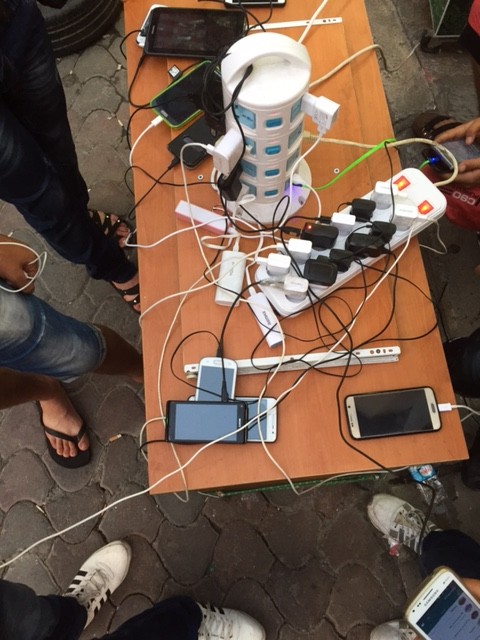 Then he starts to build in the unusual: A town square packed with Syrian refugees. They’ve hung up their laundry to dry. They’ve bought life jackets. They’re waiting for human smugglers with rafts. And then – this is my favorite part – he challenges the stereotypical image we might have of a place crawling with desperate people: He takes us to the café where the owner lets Syrians charge their iPhones and use Wi-Fi. (I can’t help but think of this in US Weekly style: Migrants! They’re just like us! They charge their smart phones!)

Ari, who reports from all over the world, says this is a common approach he uses:

Whenever I’m covering a story in a far-away place about an issue our audience may not have experienced first-hand, I search for ways to make the place and the issue more familiar and relatable. So establishing that Izmir is a pretty typical beach town gives people an image that they can latch on to.

Another principle that I try to follow when I’m reporting on bleak and depressing subjects is the old Mr. Rogers line, “Look for the helpers,” the people who are doing something good to improve the situation. In that way, the cafe owner checks two boxes: he makes the Syrian refugees relatable (they have smartphones and need Wi-Fi just like us!), and he makes the situation feel a little less hopeless.

Shape a scene by your movements

A lot of audio pieces begin with the reporter saying, “I’m standing here…” We stand on city corners, in farmers’ fields, on top of mountains. What we are trying to do — to quote an NPR cliché — is “take you there.” But the wisest storytellers teach that you should never just stand still. You should be moving.

This piece by Morning Edition host Steve Inskeep and producer Rachel Ward is an excellent example. Steve returns to an Arabi, Louisiana, street where he first reported back in 2005, after Katrina.

Steve says the opening of the story is critical:

My ambition is to start the storytelling from the first sentence. Sometimes this calls for a hard news lead. Often it calls for something more subtle. In this case we began:

“The other day, we stopped a car in front of a house. It was a house on stilts, a good eight feet off the ground. We climbed the steps to the high front porch. [SOUND OF STEVE KNOCKING ON THE DOOR] We were talking with everyone who would answer the door on a single street outside New Orleans.”

This opening does more than paint scenery. It suggests movement. And it should raise a subtle sense of anticipation that’s vital to storytelling. Why on stilts? Who’s in the house? These are not necessarily huge questions. They need not be. They merely need to tug us inward, toward bigger things.

Over the course of the next few minutes, Steve continues to move along the street — meeting people, interacting with them. His movements stitch the street together better than any explicit exposition could.

(And a tip from producer Rachel Ward: This piece proves the value of an old radio rule — always “roll tape” — when you’re in the field. The mundane sounds of Steve climbing stairs, knocking on doors, and meeting people are necessary ingredients for this kind of scene.)

People are the place

Sometimes the most distinctive sound of the place has nothing to do with its physicality. It’s the people. In this story, the montage of down-and-out Angelenos on LA’s Skid Row by correspondent (and now All Things Considered host) Kelly McEvers and editor Tom Dreisbach vibrates with life.

This is not just a montage of voices randomly gathered and assembled on a trash-strewn street. The people you hear are interacting with two police officers who know their beat well. This scene introduces you to characters; it also introduces relationships that are central to the story Kelly and Tom are telling. Those relationships are fraught. Affection, tension, and anger are wrapped together on Skid Row, and you hear all those feelings resonate in these interactions.

I could go on rattling off more great examples. Suffice to say, these producers and reporters make it look easy, and it is not.

You have to trust that your sound communicates more than you can imagine. You have to hand agency to the listeners and hope you’ve given them enough audio clues to hear what you want them to hear. It’s a loss of control over one’s story. That’s scary, but it’s also inevitable once your story goes out into the world.