How NPR covered the Paris attacks 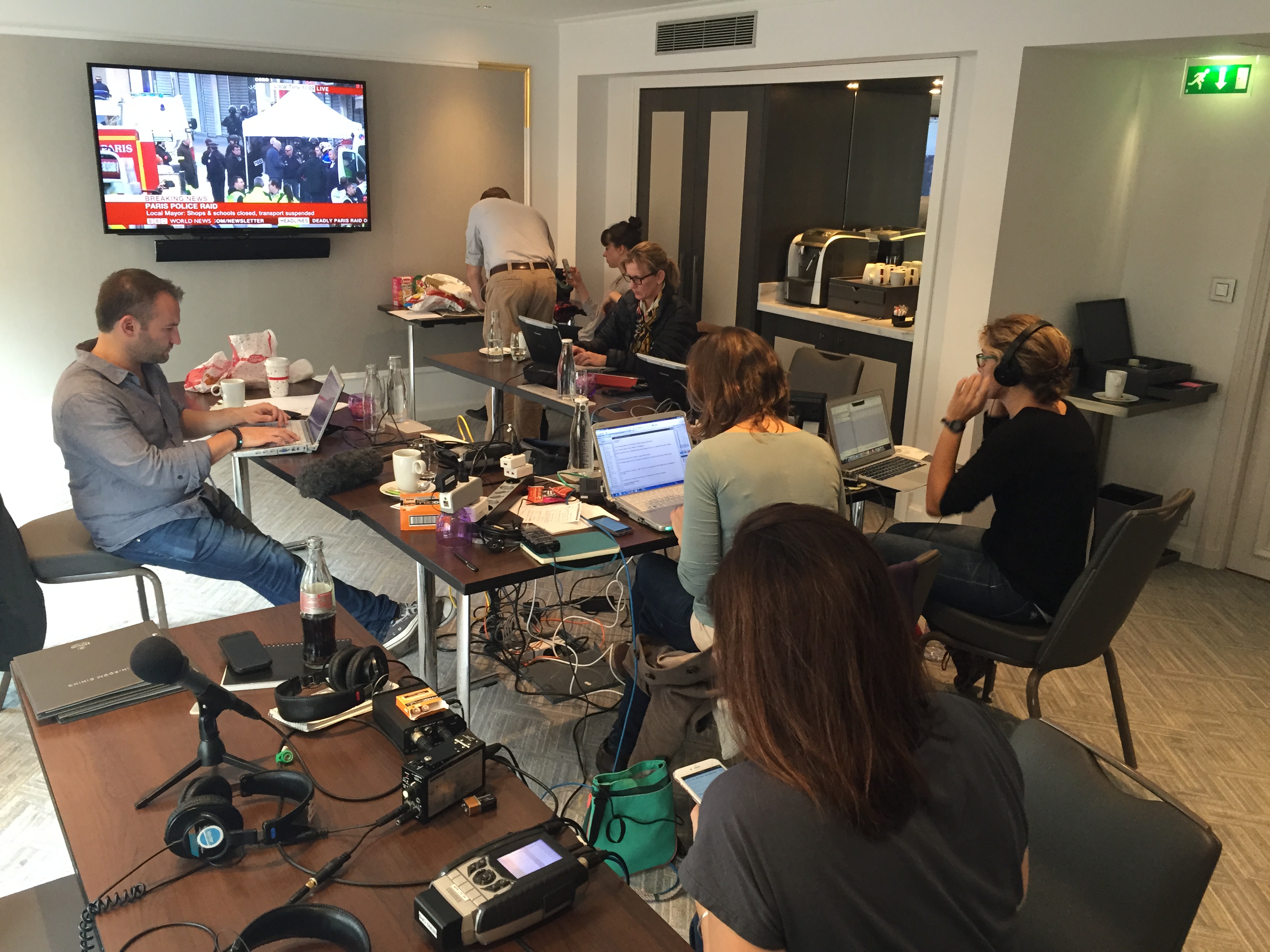 An NPR crew prepares a broadcast from Paris on November 18, 2015. Photo by Russell Lewis/NPR

In the days after the attacks in Paris, NPR deployed on multiple fronts, with special coverage by shows, Newscast reports, continuous updates online, and on-the-ground stories by reporters, producers and hosts in Paris.

Different types of stories emerged. Here is a sampling (and it really is just a sampling) of the coverage:

Live updates on air and online

As the attacks unfolded Friday night and early Saturday morning, NPR journalists reported the details as they developed.

Here’s how NPR news leadership described the initial hours in a note to staff:

“Over the next few hours ATC produced hours of live coverage, featuring dozens of interviews with witnesses, journalists and analysts. Along with the Newscast Unit, The Two-Way blog and the entire Digital News team, they smartly and responsibly kept our audiences up to date on the unfolding horrors throughout the evening.”

During the next few days, the Two-Way‘s reporters and editors created posts that centered around “What We Know”:

The “What We Know” pieces included both short bursts of updates: 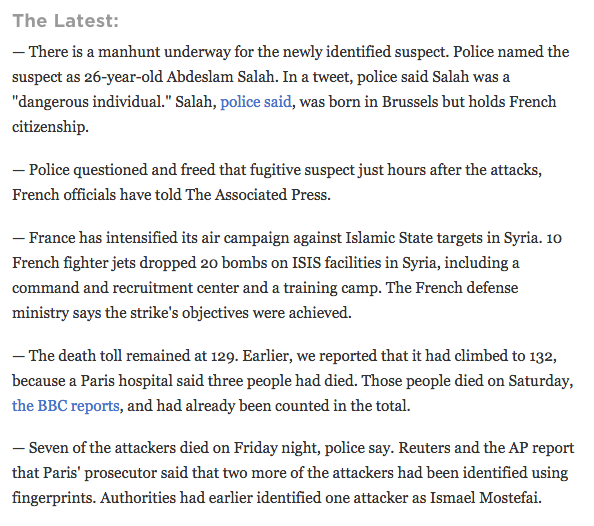 And relevant context that helped people understand the story as a whole: 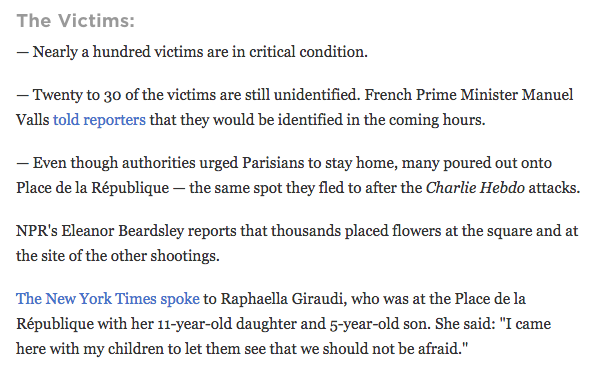 Listeners were updated Friday night and throughout the weekend as news continued to develop.

At 5 p.m. on Friday, this Newscast aired with early details.

And here’s just one of many examples of radio coverage — a conversation between ATC host Audie Cornish and Paris correspondent Eleanor Beardsley:

How did NPR’s coverage play out for people looking at and listening to their mobile devices? After all, most NPR.org visitors arrive on a mobile device of some kind.

The “What We Know” posts were tailored for people using mobile devices. The short updates made it easy to skim through the information and dive for more context. It’s also relevant to note that, in a situation where people want information quickly, NPR.org is one of the fastest websites in the news industry.

The team behind NPR One — the audio app that delivers a stream of news and podcasts — noticed that more people started using the app as news unfolded. Listenership spiked on Friday night and stayed up through the weekend and next week.

NPR One’s editorial team of Sara Sarasohn and Viet Le, along with NPR Digital Media Production and Morning Edition staff made sure the app was serving those users. Here’s how Sara described the effort in an email to me: “NPR One always had the freshest Newscast plus the best of the scenes and analysis from Paris, Brussels and beyond.”

As I noted above, the Two-Way’s “What We Know” posts were multi-purpose — providing newsy updates and context. Someone who visited one of these posts could quickly get a 360-degree view of the story — the most recent events, what’s new with the investigation, what’s known about the attackers, the status of the victims and more.

There were also explainers that provided deeper background…

There was also political analysis by NPR’s Washington Desk. Here’s one example, from in the NPR Politics Podcast:

The “in the moment” reporting and explainers served a specific purpose — helping people understand what’s happening, why it’s happening and potential implications.

There was another type of story — the “perspective” piece — that added something different but valuable to the mix of news. These were also stories told from the point of view of a source or NPR journalist.

For example, this was Eleanor Beardsley’s personal piece about the attacks and what it means to her as a Paris resident:

This piece by Michel Martin:

This piece by Scott Simon:

In this one, Camila Domonoske curated NPR radio interviews to tell the stories of eye-witnesses:

And this piece, by Morning Edition host David Greene, about a friendship that formed at a memorial site:

About a dozen NPR journalists were on-the-ground in Paris.

Paris streets are quiet this morning. People are shocked. It's 10 times bigger than the January attacks – hard to get your head around it.

I'm seeing blood on the street and a bloody shoe as i head toward the concert hall.

All hell breaking loose outside Paris this morning in neighborhood of stadium – St Denis. – showdown between SWAT teams and terrorists @NPR

Other NPR journalists in Paris used Twitter as a way to get information out:

"Mom, if those are my last words, I love you." We hear from a woman who was trapped inside the Bataclan. @nprgreene @mirandatk

Hollande: French residents should be calm. "We must continue to work and go out and live and enjoy life and try to influence the world."

If you were following @NPR on Twitter, you would have seen self-contained tweets with useful information.

This one, which provided a fact from a story:

And these, which served as mini-photo essays:

The French were not alone in their grief. https://t.co/1199wJp1Gk pic.twitter.com/CRsUPeBzb5

As you can tell from the above tweets, visuals played a large role in NPR’s coverage.

Kainaz Amaria and Dana Farrington told the story of the attacks through high-resolution images:

And this piece illustrated how people responded to the attacks in the days that followed:

When governors started calling for a stop to Syrian refuges settling in the United States, this graphic accompanied a story by NPR’s Arnie Seipel: 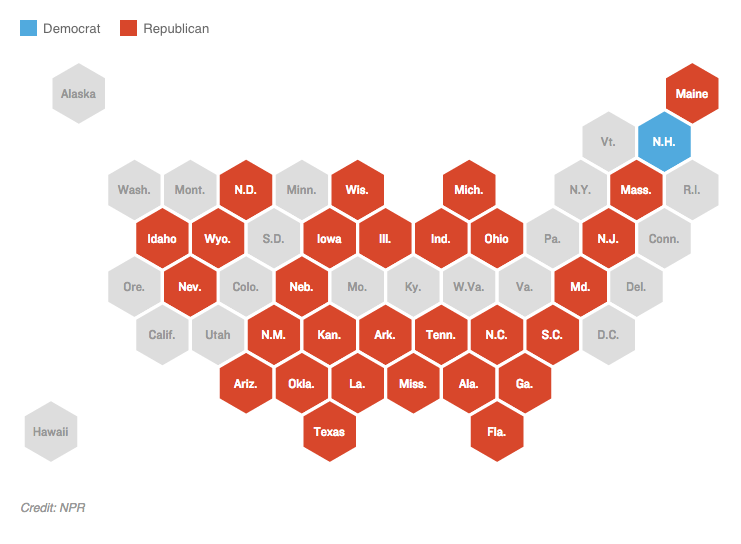 The world’s attention was captured by the Paris attacks, ISIS’s role and the debate around Syrian refuges. People went to Twitter to discover the latest news, Google to search about it, Facebook to see what people are saying.

In the process — as often is the case with stories of this magnitude — journalism from the archives emerged.

That piece bubbled up organically, prompting NPR to republish it with a note:

Editor’s note on Nov. 17, 2015: This story was originally published in September 2014. But in the wake of the Paris attacks and the discussions surrounding it, we’re republishing it now.

For that reason, it’s wise to monitor analytics. People can send you signals about something they’re finding relevant again. (Tip: We have a guide on how to use data to inform editorial decisions: Acting on analytics: Using data to make editorial decisions)

The same happened with this NPR story — Can’t go home — from February 2015. Take a look at how people are tweeting about it.

We're hearing so much talk about #Syrian refugees, Here are their stories in their own words. https://t.co/dQa95EUYhA

There was another type of coverage — the kind that gave audiences a peek behind the curtain. NPR’s Russell Lewis shared this photo of reporter Lauren Frayer taping a report after the police raid in Saint-Denis. 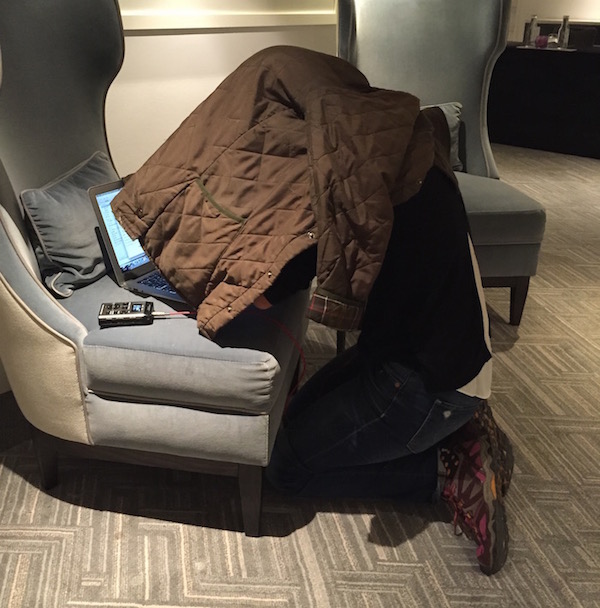