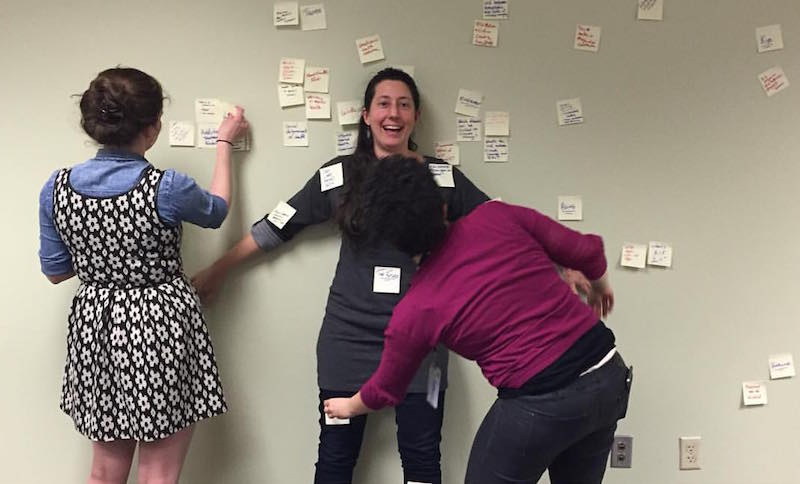 Sometimes project planning gets silly. In this photo, Carmel Wroth, who runs Side Effects Public Media, becomes one with the stickies. (Photo by Michelle Faust)

So you’ve decided to launch a new project — a vertical, a series, or something else. What happens next is usually a flurry of questions.

Where do we start? What should we cover? What shouldn’t we cover? Who’s our audience? How is our thing different from all of the others out there covering _______ (tech, health or something else)?

In this post, I’ll walk you through a process to help answer those questions by planning your project.

Why should you take the time to go through an exercise like this one?

This process is meant to be flexible. You can use it to shape a vertical (how I’ve mostly used it), to plan a project, to plan newsroom-wide coverage, or to plan a social strategy. Point is, it’s simply a way to think through something you’re making. You can adapt it to meet your needs. It works just as well for radio as it does for digital.

One last note before you dive in: This isn’t the only way to do it. But we’ve used this method many times — at NPR and with member station newsrooms — with success. I should also mention that we didn’t invent this process. We’ve adapted it based on other processes inside and outside NPR. And you should feel free to use it, change it and adapt it as needed.

If you really want to do this the right way, you’ll need to set aside some serious time. A day at least. Two days is ideal. Everyone involved in the project should attend — reporters, editors, producers, digital producers. Find a space to gather. The space needs to have a wall that you can stick things to. Try not to book the cramped conference room — open space is better.

At this point you’ll want to choose a facilitator — someone to guide the group through the planning and to make sure you stay on schedule. The facilitator can be someone from inside the team or from outside the team.

Planning day! Is everyone in the room? Let’s begin.

Start with an open-ended brainstorm about your project. 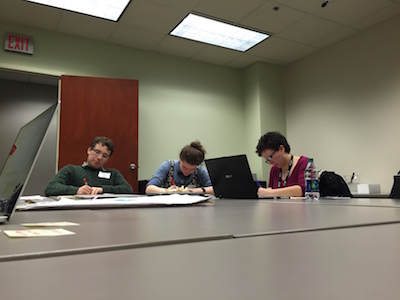 Give each person a sticky note pad and a marker. For the next few minutes, each person will silently write down ideas related to your project. Anything goes at this stage — 10,000-feet-high concepts, specific story ideas, big issues, people you’d like to interview, long-term projects, stuff you’ve already covered, stuff you’d like to cover. The point of this exercise is to surface everything the group can come up with. When in doubt, write it down.

Also, make sure the group bakes audience thinking into the brainstorm. In the same way that they’re coming up with story ideas, also make sure they’re writing down audience needs. For example, if you’re starting a science vertical, who are the people you’re trying to serve? What do they want? What are their interests? What questions might they have? If you’re re-thinking local newsroom coverage, what do residents care about? What have they been asking you?

When the brainstorm begins, each person quietly writes one idea/concept/assumption per sticky note. Write one, put it aside. Write another, put it aside. You get the point.

Set a timer for this exercise. Ten or 15 minutes should be enough. And if the room agrees, I recommend playing some light music in the background.

By the end of the brainstorm, each person should have a collection of sticky notes in front of them.

One-by-one, each person should stick their notes to the wall. This is most effective if participants explain each note as they post them. For example, if Jane goes first, she sticks a note to the wall and explains its meaning to the group. Then she sticks another one up and explains it. Once all of Jane’s notes are on the wall, the next person will do the same thing.

Don’t evaluate ideas at this stage. It’s a waste of time to point out that something is a good idea or a bad idea or unrealistic or done before. It’s a brainstorm. It’s about liberating ideas, not limiting them.

This step takes time. By the end of the process you should have most stickies in groups. (You likely have a few solo sticky notes. You can put them into a miscellaneous category).

Step back and look at the wall. As a group, you’ve organically pinpointed a few themes. Now it’s time to decide which ones are most important to you.

Everyone returns to their seats and picks up their markers and sticky notes. Each person grabs three sticky notes and writes a different number on each — “1,” “2,” and “3”. For this exercise, “1” represents each participant’s top priority, “2” is the second priority and “3” is the third priority.

For the next five minutes, everyone should stick their numbers next to themes — the “1” would go next to the theme that’s your top choice, etc.

Set a timer for five minutes or so.

Step back and look at the wall. Now you can see where everyone tagged their sticky notes. Which themes have the most “1” notes (aka the top priority)? Which ones have the most overall numbers?

As a group, you now have to decide which themes you will own and which themes you won’t. This step requires difficult discussions about what not to cover. Depending on your staff size, I recommend selecting two to three themes. Anything more and you begin to lose focus.

The numbers shouldn’t dictate your decisions. They should inform the conversation. Other factors to consider:

Notice the emphasis on audience. This is by design. You should begin thinking about your audiences early on.

By the end of this step, you should have two to three themes picked.

Welcome to the hardest step (in my opinion). You brainstormed ideas, grouped them together to make themes, ranked and prioritized, and now you have three themes that your team is going to attack with kick-ass coverage.

This is a good point to switch from sticky notes to a Google Doc or equivalent. (I created a template to work from). If you have a big screen in the room, open up the doc so everyone can read along and offer suggestions.

As a group, now you’ll want to define each theme. What do I mean by “define?” Write a statement for each theme that clearly explains their purpose. Unpack buzzwords and be detailed. That way in three weeks, when reporters are trying to decide whether or not to cover a story, they can read the themes and know exactly what they mean. It also helps to include questions in the description. The questions are what drive your coverage.

Here are some ways to ensure your themes are written effectively:

Here’s an example, from a project planning brainstorm with Side Effects Public Media. One of the themes the group chose was “addiction treatment,” a huge topic. After much back-and-forth discussion, which included a closer inspection of the sticky notes assigned to the theme, they landed on something much more focused:

Theme: Addiction treatment barriers
There are legal and financial barriers between doctors providing treatment and long-term recovery to addicts. What are the barriers? Why do they exist? What’s working to break them down? Our focus on treatment includes medication, related mental health care and social support.

The group took a big topic — addiction treatment — and narrowed in to something much more specific.

Really push each other to land on language that’s narrow and specific. Make sure it satisfies the bullets under Steps 6 and 7.

Once you write (and read out loud) your two or three themes, it’s time to define their audiences.

Okay, take a break. You’ll need it. The process up to this point has likely made your brain hurt. In fact, if it didn’t, something may be wrong!

Rest assured: The hard part is over. You’ve come together as a group, put your ideas onto a board and identified core themes that will guide your coverage.

In this next step, you will focus on the most important part of all of this — the people you’re trying to engage. If you followed the bullets in Step 6, then you thought about audiences from the start.

Take a look at each theme and list the different audiences for each. Be specific — “millennials” won’t cut it. Neither will “professionals.” Instead, go for “middle/high school teachers,” “hospital nurses,” “renters.” As a group, list as many audiences as you can think of for each theme.

Also, although it should go without saying, “everyone” is not your audience.

Create a new line underneath each audience. Describe exactly how you plan to reach that audience. This exercises forces you to think about the ways you can really get your stories to the people who need them and want them most.

Like everything else in this guide, be specific. Just writing “broadcast” or “Facebook” isn’t direct enough. Sure, those can be part of your strategy, but the bigger platforms are harder to target to individual groups. This means you may need to be creative.

Instead, the VPR team created a printable poster that anyone can access online. They then went to rehabilitation facilities and hung the posters on bulletin boards.

One more example. When KCUR started a project called Beyond Our Borders (a deep-dive into Kansas City’s distinct neighborhoods), the team deliberately set off to reach audiences that weren’t already served by KCUR’s broadcast or social media platforms. They decided to kick off the project with a novel idea — they went to the neighborhood. They walked around. They visited restaurants. They listened. They tweeted along the way.

Both of these examples demonstrate that sometimes you need to get creative — and out of the building — to reach your audiences.

In front of you, you should have two or three themes, written out with specific language. Under each of those themes are different audiences you want to reach. Under each audience are ideas for reaching them.

Now the truly fun part (in a geeky journalism kind of way). Under each theme, list off story ideas. Many of these ideas may already exist on sticky notes. Don’t list too much. Maybe 5-10 story ideas per theme.

I suggest writing these story ideas as headlines. That keeps your plan tight — and keeps you from rambling.

The good news is you’ve done all of the work to inform a mission statement. You have focused themes, defined audiences and story ideas. Bring it all together in a paragraph or two.

Some elements of a strong mission statement:

Write the mission at the top of the plan.

You’re done! Congratulations if you completed the plan. Seriously, this is a challenging process. Now that you have a plan, print it out. Put it on everyone’s desk. Tape it to walls. Reference it in meetings. Don’t let it get lost in the craziness of a newsroom.

Only you’re not really done. You put together an awesome document that will guide you. But it’s by no means a finalized document. It’s alive. And you should revisit it often and make adjustments as needed.

And then, yes, do it all again in three to six months. Issues change. New stories emerge. People leave. New people arrive. The plan you made today should reflect those shifts.

I know that this is a complicated process that’s not easily explained through text. So I’d love to hear from you if you tried this or have questions. Find me at @ericathas.