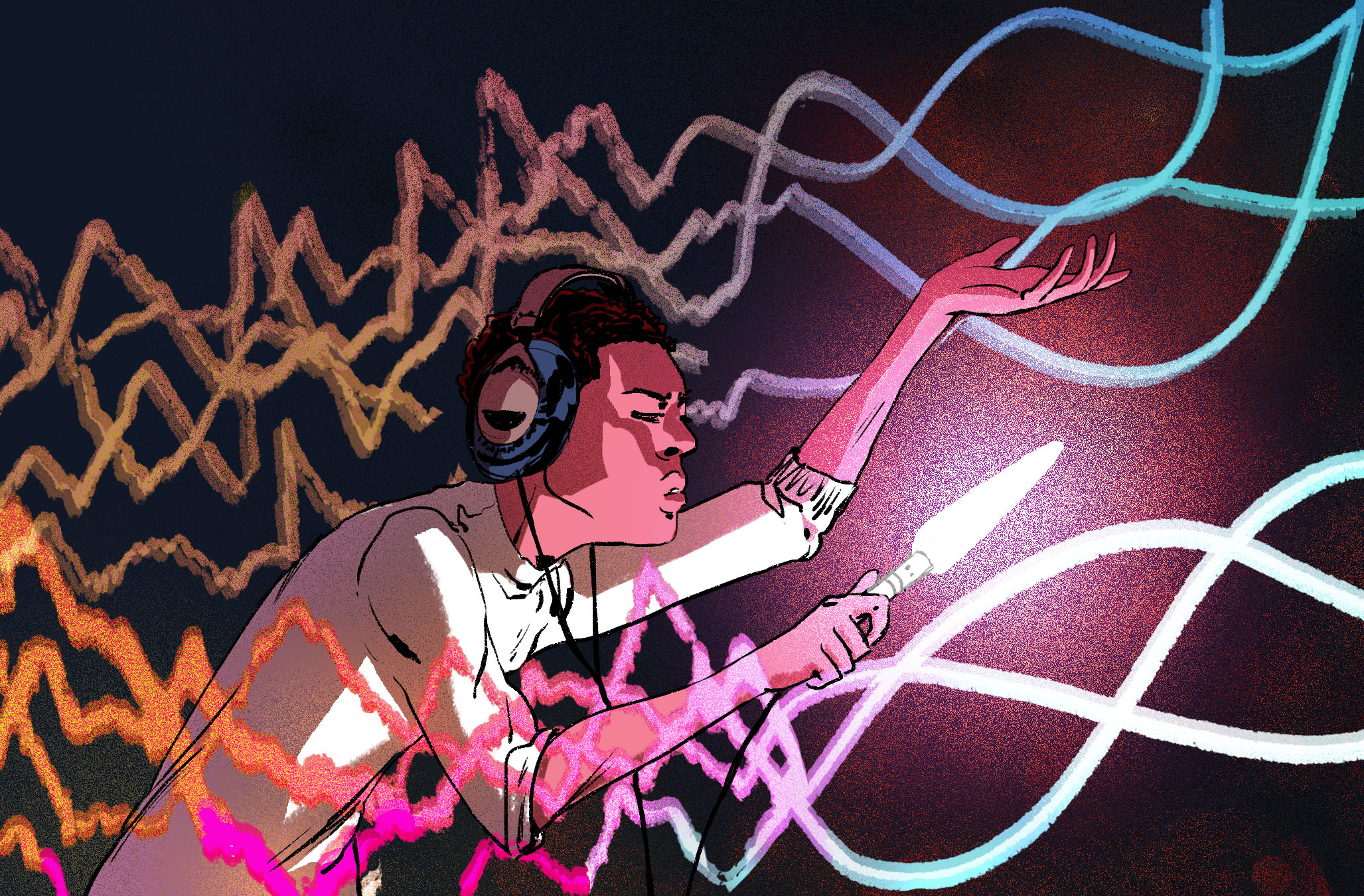 The main reason people object to musical scoring is that it’s manipulative. I’d argue that’s exactly the reason to use it. Music is a tool that can be used to call attention to underlying themes or emotions, spotlight your best tape, control the pacing of your story and even help create a sense of time and place. Music is just one of many ways we manipulate elements to make stories more dramatic. We cut and rearrange tape to make it stronger, and use writing to draw listeners’ attention to the details we want them to see.

Here at NPR HQ, our in-house ethicist Mark Memmott recently wrote a memo where he flatly declared “there’s no rule against using music in broadcast pieces.” But he cautioned that it’s important to use it judiciously. Music, he wrote, “should not be used to make editorial statements or steer a listener towards judgements or conclusions.”

The obvious challenge in applying these standards is that, more than facts and statements in written language, music affects people differently and is open to interpretation. I recently worked on a series of scored radio features about people who had changed their minds about the Israeli-Palestinian conflict, reported by NPR’s Emily Harris, and mixed and scored by Morning Edition producer Barry Gordemer and All Things Considered producer Gabe O’Connor.

Since the pieces were on a sensitive topic, a group of nine editors and show executives weighed in on the musical choices. Some felt the music made the stories work better, others were ambivalent — and one editor thought they would have been better without it. We used regional music to create a sense of place — some felt it was clichéd. We used music to sketch the interior emotions of our subjects — and some felt we occasionally crossed the line into editorializing. If you are going to experiment with music in your newsroom, expect a similar process.

It took a few versions, but we ended up finding a happy middle ground and aired the scored pieces.

To be absolutely clear — music should not be used in every piece (see below). But it can be a very useful tool to set a narrative story apart from the breaking news and analysis that surrounds it.

On that note, here are my highly subjective thoughts on when and how to use music in radio features — and when not to.

What stories should not be scored?

News stories with multiple viewpoints: The majority of current event news stories should not be scored. If you have a typical he said/she said news story, you are going to have a hard time using music without introducing some sort of editorializing.

Boring stories that drag: Music can not magically fix bad tape and clunky writing. Best to just start over.

What kinds of stories are worth scoring?

When music is integral to the story: This is the most accepted use of music in radio features, and it’s usually reserved for stories specifically about music or scenes where music just happens to be playing in the background. But there are ways to look for and create opportunities to introduce music. Once you have music in the piece, it’s easier to introduce subtle scoring throughout. Emily Harris did this in her piece about an Israeli woman who went from a peacenik to a religious settler in the West Bank. She talks about a song that defined her childhood and later introduced a song that highlights her change of heart. In a piece I did for Studio 360 about the effects of alcohol and pot on creativity, I deliberately chose a musician as one of the characters to create musical scenes.

When the story is told from the point of view of one character: Music can be used beautifully to illustrate the internal life of someone telling a story, which is one reason why many non-narrated stories are scored. (Here’s Willie Nelson talking about, singing and embodying “Amazing Grace.”) Music in this case is used to make a story more immersive, or to add another layer to the story to reach listeners’ emotions beyond the words. But tread carefully, you don’t want to juice up sad tape to make it even more sad, for instance. That’s when listeners find music over the top or just simply cheesy. More on that below.

Music as a replacement for scene tape: This is used effectively by many podcasts, who either lack the resources to record scenes in real time or want to illustrate a scene that’s not on tape (like this story I scored about a skydiving accident). You can also use music to create a scene that illustrates an idea; Radiolab is the undisputed master of this approach — hear the fireflies light up your mind.

Music can be used to evoke a time and place: This is a familiar use — think of a film documentary about the jazz age and you can hear Louis Armstrong start to play. This can be effective but, just like with writing, you’ll need to be careful to avoid clichés.

What are the best practices for scoring radio pieces?

Think in musical metaphors: It’s important to be able to articulate why you are using a piece of music to illustrate a particular moment; if you can’t do that, it’s probably not going to sound right. I’ll often think of an underlying theme or emotion I want to convey. If it’s nervous anticipation, I could use something fast-paced and percussive. If the feeling is introspection, I could use a drone or pad without rhythm. Jonathan Mitchell of The Truth has a composing background, and he articulates this idea well in his Transom piece describing using music to illustrate a pattern-based engineering theory. If you don’t think in terms of metaphor, you may be tempted to use, for example, generic electronic ambient music — sounds like public radio! — to juice up moments when your story starts to drag. Resist that impulse. If your piece drags, then you need to fix the writing or structure.

Use instrumental music: Look for music that feels “incomplete,” that has left sonic room for another element. It’s almost like the music in your piece is the backing band, and your narration and tape will “complete” the composition. Avoid music that’s so busy it competes with the voices and sounds in your story. And in most cases, you’ll want to avoid music with vocals since it will often compete with your narration and make the piece sound jumbled and confusing. Similarly, instruments that inhabit the same frequency as the voice are problematic (trumpets, etc.) A lot of ambient music works well, but can be overused. Solo instruments can be nice choice, especially if used to illustrate one character’s emotions or journey.

Only use music you love: If the music doesn’t move you, why would you tarnish your work with it?

Commit to the music: If you are going to use music, make sure to introduce it early in the piece. This will set listeners expectations that this is a scored piece of storytelling. Music can seem jarring and distracting if it’s introduced too late. Also, don’t hesitate to let the music play in the clear for 5-10 second stretches — it can help your piece breathe and give listeners a chance to reflect on what they’ve heard.

Fade the music out to create tension or highlight important events: When you fade music out in a piece, the silence has the subtle effect of spotlighting whatever comes directly after. This is a great way to set the stage for a particularly arresting piece of tape.

Avoid using music to amplify simple emotions — and avoid musical cliches! Resist the urge to run a mournful cello sonata under tape of someone weeping. Resist the urge to run the Rocky theme as someone fights through obstacles (unless you’re being ironic of course). Music is best used to amplify more subtle underlying emotions or moods. Think “pensive” or “hopeful” — avoid “sad” or “happy.”

Use dynamic music that builds and releases: Music that shifts in dynamic ways can be used to naturally emphasize dramatic points in your story. If you want control over when the music changes, you can often cut out (or copy and repeat) bars of repetitive sections. To do this, count along with the music until you find the first beat of a bar (you can often see the beats as peaks on a wave form), then cut out (or copy and paste) as many bars as you need, starting at the end of one bar and picking up again at the opening of another.

Nudge your tape so it’s in rhythm with the music: You can give the feel that the music and the narration are integrated by having the words fall on the beat. You can do this by subtly shifting when you introduce tape or by adjusting the spaces between words. From Transom’s “Using Music” columns, Snap Judgement’s Pat Mesiti-Miller explains how he takes an almost hip-hop approach to melding words and beats.

Use an equalizer and reverb to get the sound you want: Instead of just fading the volume, you can use your equalizer to pull out the high frequencies of the music so it doesn’t clash with voice but stays present in the mix (that’s a “low-pass” filter, you can also experiment with the opposite, a “high-pass filter.”) You can use reverb to change the feeling of where the music is being played (for instance, you could make it sound like it’s outside or in a cathedral or a small room).

Compose your own music: This gives you an incredible amount of control over how the music interacts with your story. Beyond being able to create the right sound, you can time the music to transition at exactly the right times. It’s best if you’re a musician, but that’s not necessary for simple sound beds. Programs like Ableton Live or Native Instruments come with pre-programmed pads and drones that you can customize for your needs.

The Leitmotif: In classical music, themes will return that are linked to characters or places (think “Peter and the Wolf”). You can also use musical themes to connect ideas in your piece. For instance, in this piece by Emily Harris, she uses a returning theme to emphasize the generational aspect of a Palestinian family’s resistance and, in another, a memory that haunts an Israeli soldier.

Find fresh ears: Musical choices are always subjective, but it’s still a good idea to get a second opinion. It can be very easy to get so focused that you lose sight of what’s working or not. Get a range of opinions and then trust your gut.

Check your mix: Mixing voices over music can sometimes be tricky. Mixing with headphones will often make you think the music is just right — but when you listen back on speakers it’s definitely too low. Ensure you’ve got the right balance by checking your mix in multiple listening environments.

Go forth and score some radio features!

I’m convinced that the subtle and creative use of music can help reporters and producers evolve and reach audiences who are used to the kind of immersive storytelling they get from podcasts. It will take time to train your ears to use music effectively, so be patient with yourself.

Michael May is a senior producer with the NPR StoryLab.