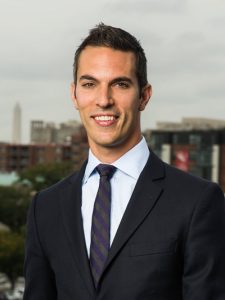 We asked Ari Shapiro, one of the hosts of All Things Considered, about his media habits: “what – and who – are you paying attention to?

What’s been good on the internet recently?
The photographer Ben Moon made a beautiful and moving short film last year called Denali, about saying goodbye to his dog. I know how that sounds. But watch the first ten seconds of the movie and you’ll understand why it’s been viewed more than 13 million times on vimeo. You’ll also probably cry at your desk by the time it’s over. So that was last year. Then a couple of weeks ago, Ben got a new dog-a puppy named Nori. And I’m obsessed with their adventures. Ben is on Instagram at @ben_moon, and Nori has her own account at @noribythesea. I can’t wait to see where these two go together. (Also, credit where it’s due: Ben took the photo that I use for my Instagram profile @arishapiro.)

Another good thing on the internet: When I lived in London, I fell in love with the cabaret scene there. I miss it. Now one of the funniest duos, Bourgeois and Maurice, has released a music video for their song, Chemsex Party. It’s mostly safe for work.

And finally, if you miss The Toast like I do, Slate gathered some of the site’s best pieces here.

Whatcha listening to these days?
My friend Andrew Keenan Bolger has some of the best playlists on Spotify and posts new ones every couple months. Reply All has been knocking it out of the park lately. And NPR’s podcast machine is on a roll these days–between the Politics Podcast, Code Switch, and the new season of Invisibilia. Also, my friends from the band Blind Pilot have a new album coming out this summer. I might have gotten an early sneak peek of it, and I might be unable to stop listening to it on repeat.

Fav people to follow (online):
Sam Sanders just had a crazy smart tweet storm about the way politicians (in this case Donald Trump) use statistics to talk about minority groups.

Constantly stylish on twitter is @guardianstyle. This account is not about fashion; it’s the stylebook – the newspaper’s grammar police. You can tell from their twitter feed that the Guardian is unafraid of swear words and other colorful uses of language.

When I was reporting on the migrant crisis from coastal Turkey last year, I met a travel writer from Casablanca named Houssine Benboubker. His Instagram account (@houssineb ) is a welcome escape to beautiful places, especially when the news is grim.

And finally, I like what The New Yorker does on snapchat; their quirky segments about cartoons and cover art are always a sunny spot in the week.