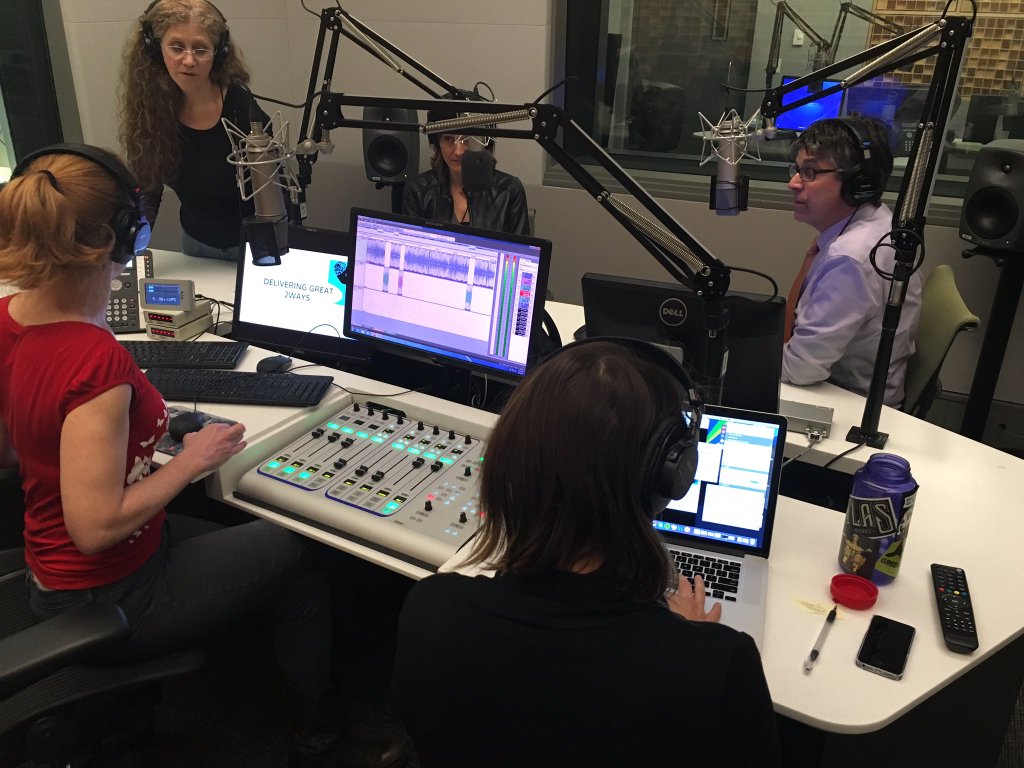 We take webinar production seriously. In the studio for a session on reporter two-ways in March 2016. (Serri Graslie/NPR)

Liza Yeager was the first-ever intern with the NPR Story Lab and is the co-founder of Now Here This.

It’s the dog days of August. That means it’s hot outside and slow in the newsroom and you’re itching to binge-watch some webinars. Right? Right.

We’ve rounded up some of the team’s best recorded training sessions below:

Reporter two-ways: Improvisation within a structure

You’ve been gathering facts and collecting tape — now you have to sit down in front of a hot mic and communicate what you’ve learned in conversation with a host. NPR’s Rachel Martin, Bruce Auster and Andrea de Leon help us figure out how to do it well.

Writing through sound: A toolbox for getting into and out of your tape

We like hearing Here’s expert A, or This is what person B has to say. Those introductions serve us well. But you can do more. This webinar introduces a bunch of unique ways to write through your sound, including hinting, signposting, echoes and more!

Is the sound in your piece supporting or subduing the message you want your piece to convey? Kevin Wait explores how technical production and sound design can help listeners understand what you’re really trying to say.

Lessons from inside NPR

What NPR One can teach us about radio intros

Metrics aren’t everything. But they might be able to teach us something. In this webinar, Sara Sarasohn, Managing Director for NPR One, shares examples of the radio intros that keep listeners tuned in on the app — and the intros that don’t.

NPR Code Switch: how we grew an audience on social media from scratch

It’s no secret that NPR’s Code Switch has a pretty prolific social media presence. And the team has been able to use the community they’ve built online not just to share content, but to generate it, too. Here, Kat Chow shares her strategy.

How a small station created a big podcast

In June of 2015, WWNO launched a short-term podcast called Katrina: The Debris. They had a small team and a small budget. But the podcast was a huge success. Eve Troeh and Jason Saul of WWNO explain how they did it, from budgeting and management to production and dissemination.

In October 2015, Vermont Public Radio aired an hour-long special on the life of Bernie Sanders. But it wasn’t only a radio program. It was also a 10,700-word online piece with photos, illustrations and social media storytelling. It’s a perfect test case for today’s multi-platform world. How did the VPR team pull it off? What worked? And what failed?