A good lead is everything — here's how to write one 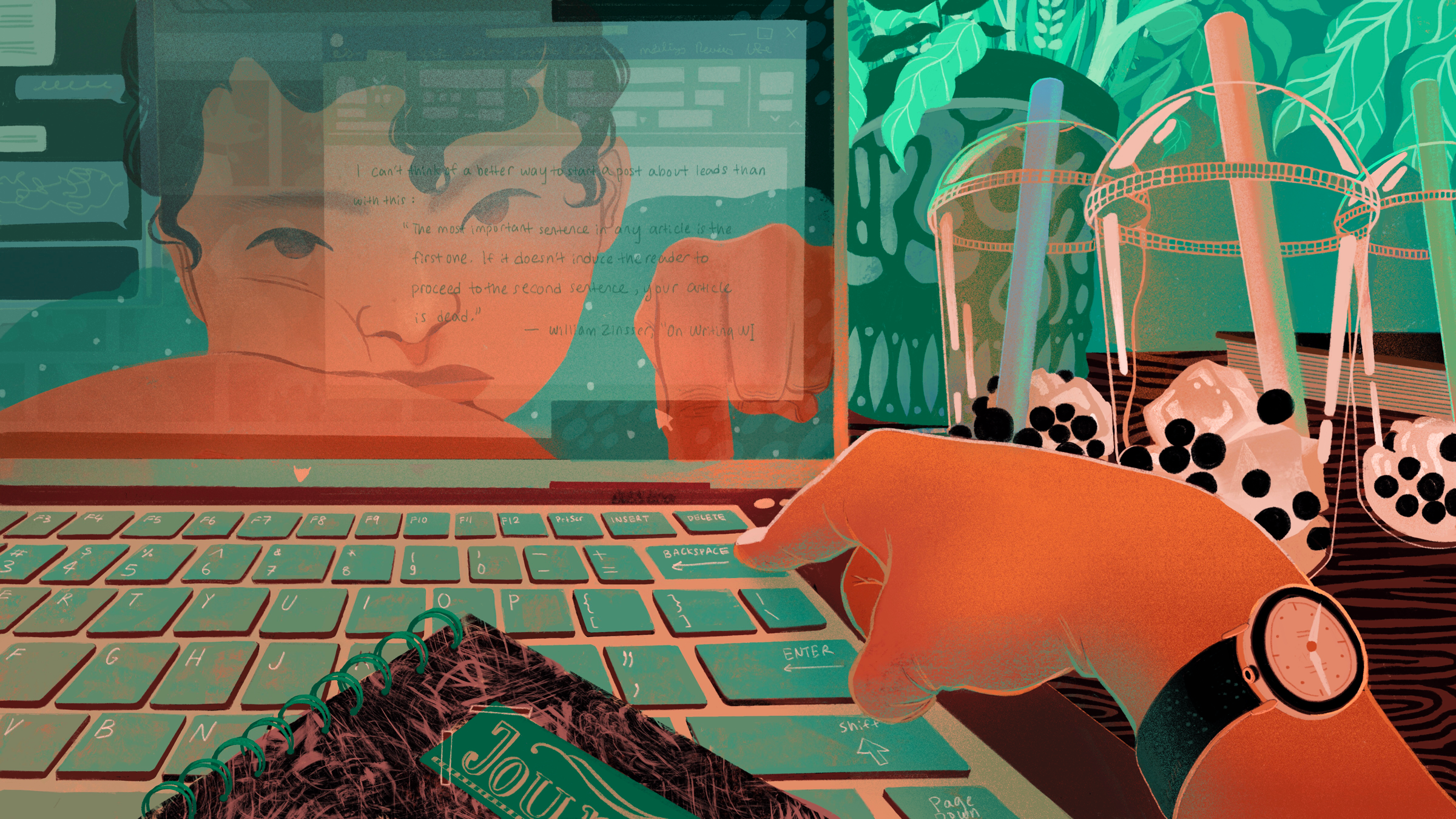 I can’t think of a better way to start a post about leads than with this:

“The most important sentence in any article is the first one. If it doesn’t induce the reader to proceed to the second sentence, your article is dead.” — William Zinsser, On Writing Well

No one wants a dead article! A story that goes unread is pointless. The lead is the introduction — the first sentences — that should pique your readers’ interest and curiosity. And it shouldn’t be the same as your radio intro, which tells listeners what the story is about and why they should care. In a written story, that’s the function of the “nut graph” (which will be the subject of a future post) — not the lead.

The journalism lead’s main job (I’m personally fond of the nostalgic spelling, “lede,” that derives from the bygone days of typesetting when newspaper folks needed to differentiate the lead of a story from the lead of hot type) is to make the reader want to stay and spend some precious time with whatever you’ve written. It sets the tone and pace and direction for everything that follows. It is the puzzle piece on which the rest of the story depends. To that end, please write your lead first — don’t undermine it by going back and thinking of one to slap on after you’ve finished writing the rest of the story.

Coming up with a good lead is hard. Even the most experienced and distinguished writers know this. No less a writer than John McPhee has called it “the hardest part of a story to write.” But in return for all your effort, a good lead will do a lot of work for you — most importantly, it will make your readers eager to stay awhile.

There are many different ways to start a story. Some examples of the most common leads are highlighted below. Sometimes they overlap. (Note: These are not terms of art.)

Just the facts, please, and even better if interesting details and context are packed in. This kind of lead works well for hard news and breaking news.

“After mass street protests in Poland, legislators with the country’s ruling party have abruptly reversed their positions and voted against a proposal to completely ban abortion.” (By NPR’s Camila Domonoske)

“The European Parliament voted Tuesday to ratify the landmark Paris climate accord, paving the way for the international plan to curb greenhouse gas emissions to become binding as soon as the end of this week.” (By NPR’s Rebecca Hersher)

“The United States announced it is suspending efforts to revive a cease-fire in Syria, blaming Russia’s support for a new round of airstrikes in the city of Aleppo.” (By NPR’s Richard Gonzales)

All three leads sum up the news in a straightforward, clear way — in a single sentence. They also hint at the broader context in which the news occurred.

This type of lead uses an anecdote to illustrate what the story is about.

Here’s a powerful anecdotal lead to a story about Brazil’s murder rate and gun laws by NPR’s Lulu Garcia-Navarro:

“At the dilapidated morgue in the northern Brazilian city of Natal, Director Marcos Brandao walks over the blood-smeared floor to where the corpses are kept. He points out the labels attached to the bright metal doors, counting out loud. It has not been a particularly bad night, yet there are nine shooting victims in cold storage.”

We understand right away that the story will be about a high rate of gun-related murder in Brazil. And this is a much more vivid and gripping way of conveying it than if Lulu had simply stated that the rate of gun violence is high.

Lulu also does a great job setting the scene. Which leads us to …

Byrd Pinkerton, a 2016 NPR intern, didn’t set foot in this obscure scholarly haven, but you’d never guess it from the way she draws readers into her story:

“On the second floor of an old Bavarian palace in Munich, Germany, there’s a library with high ceilings, a distinctly bookish smell and one of the world’s most extensive collections of Latin texts. About 20 researchers from all over the world work in small offices around the room.”

This scene-setting is just one benefit of Byrd’s thorough reporting. We even get a hint of how the place smells.

The first-person lead should be used sparingly. It means you, the writer, are immediately a character in your own story. For purists, this is not a comfortable position. Why should a reader be interested in you? You need to make sure your first-person presence is essential — because you experienced something or have a valuable contribution and perspective that justifies conveying the story explicitly through your own eyes. Just make sure you are bringing your readers along with you.

Here, in the spirit of first-personhood, is an example from one of my own stories:

“For many of us, Sept. 11, 2001, is one of those touchstone dates — we remember exactly where we were when we heard that the planes hit the World Trade Center and the Pentagon. I was in Afghanistan.”

On a historic date, I was in a place where very few Americans were present, meaning I’m able to serve as a guide to that place and time. Rather than stating I was in Afghanistan in the first sentence, I tried to draw in readers by reminding them that the memory of Sept. 11 is something many of us share in common, regardless of where we were that day.

This kind of lead steps back to make an authoritative observation about the story and its broader context. For it to work, you need to understand not just the immediate piece you’re writing, but also the big picture. These are useful for stories running a day or more after the news breaks.

Here’s one by the Washington Post’s Karen Tumulty, a political reporter with decades of experience:

“At the lowest point of Donald Trump’s quest for the presidency, the Republican nominee might have brought in a political handyman to sand his edges. Instead, he put his campaign in the hands of a true believer who promises to amplify the GOP nominee’s nationalist message and reinforce his populist impulses.”

And here’s another by NPR’s Camila Domonoske, who knows her literary stuff, juxtaposing the mundane (taxes) with the highbrow (literary criticism):

“Tax records and literary criticism are strange bedfellows. But over the weekend, the two combined and brought into the world a literary controversy — call it the Ferrante Furor of 2016.”

Edna Buchanan, the legendary, Pulitzer Prize-winning crime reporter for the Miami Herald, once said that a good lead should make a reader sitting at breakfast with his wife “spit out his coffee, clutch his chest and say, ‘My god, Martha. Did you read this?’”

That’s as good a definition as any of a “zinger” lead. These are a couple of Buchanan’s:

“His last meal was worth $30,000 and it killed him.” (A man died while trying to smuggle cocaine-filled condoms in his gut.)

“Bad things happen to the husbands of Widow Elkin.” (Ms. Elkin, as you might surmise, was suspected of bumping off her spouses.)

“Ryan Lochte is the dumbest bell that ever rang.”

Roy Peter Clark, of the Poynter Institute, deconstructs Jenkins’ column here, praising her “short laser blast of a lead that captures the tone and message of the piece.”

Here are a few notes on things to avoid when writing leads:

One secret to a good lead

Finally, good reporting will lead to good leads. If your reporting is incomplete, that will often show up in a weak lead. If you find yourself struggling to come up with a decent lead or your lead just doesn’t seem strong, make sure your reporting is thorough and there aren’t unanswered questions or missing details and points. If you’ve reported your story well, your lead will reflect this.

Hannah Bloch is a digital editor for international news at NPR.