Over the summer, Sally did a callout on social media asking where public media journalists get their story ideas. The responses were fantastic and spanned everything from standard journalistic practices to creative and humorous anecdotes.

We asked her to some of those ideas in this post. It’s a great starting point for the next time you’re struggling to come up with a new story or just need a push in a more creative direction. 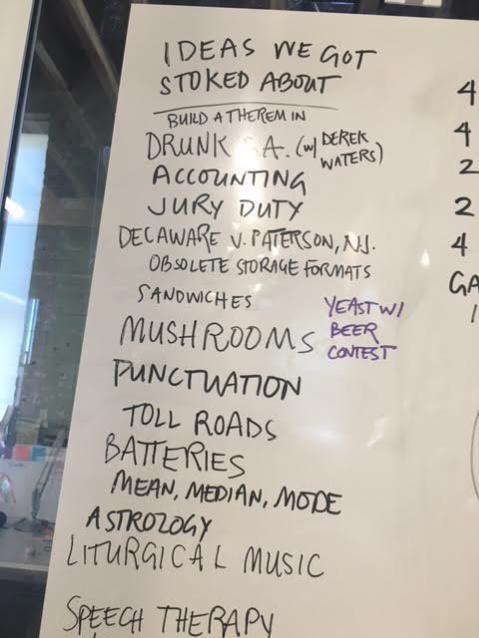 Producers of the Surprisingly Awesome podcast keep track of story ideas on a whiteboard. They’ve also created a pitch form where listeners can submit ideas. (Courtesy of Rachel Ward)

“How do you find stories?” is a question I’m asked a lot by journalism students. I have a short list of answers at the ready — but the question is actually better answered with stories.

One time I was shopping at a military base grocery store with my friend. It turned out everything was cheaper there — super-duper cheap — including cigarettes. And that made me curious about the relationship between cigarette prices and healthcare in the military.

Then there was the time that I met a woman who mentioned she was planning to not use the internet for a year. A whole year with no internet! What would that be like?

Or the time a scientist mentioned he did magic on the side and said he saw a fine line between magicians and criminals — picking pockets and doing magic tricks require a similar skill set. That seemed pretty cool, right?

My mom once told me that if I’m curious about something, odds are other people are, too. And she was right.

All of the observations above turned into stories for Marketplace, the BBC and Studio 360. And my shopping trip on the Coast Guard base even turned into an award-winning investigative piece!

Now I keep a running list on my phone. Anytime something seems odd, unusual or just interesting, I make a note. It’s like a shopping list of story ideas.

Durrie Bouscaren, a health and science reporter for St. Louis Public Radio, uses a notepad near her desk to jot down story ideas for features, spots and other assignments (as seen below). 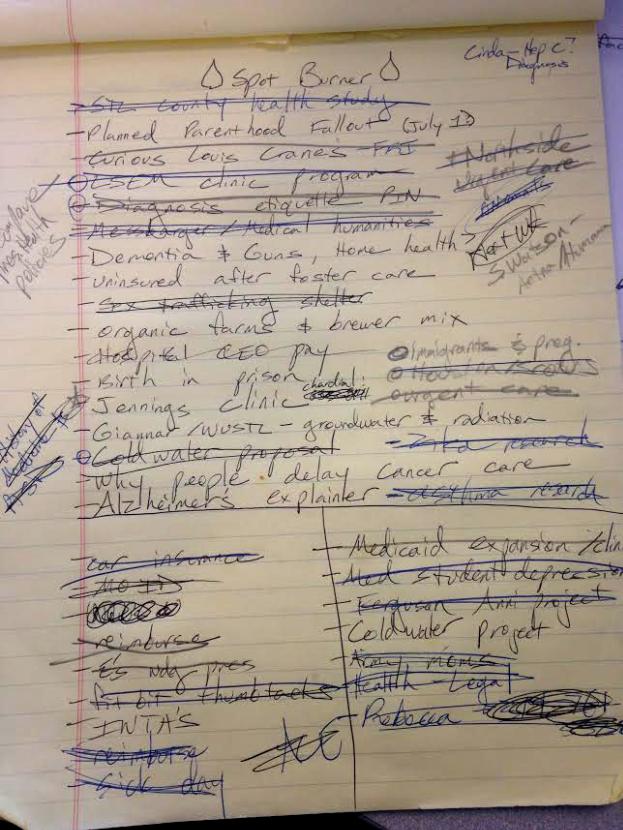 But sometimes it can feel like curiosity is on vacation. When that happens, you can always …

Years ago, I was chatting with a PR contact who was trying to pitch me a story about sports. While we were talking, he happened to mention insurance policies in fantasy sports. He said people who played imaginary sports were spending real money to insure their pretend teams — and real companies were selling the policies. Boom — story idea! It wasn’t what he was hoping to pitch me, but I was hooked.

Talk to people: Uber drivers, strangers in line at the grocery store — even people standing next to you in elevators.

And don’t forget social media. You can always try posting about what you’re looking for and ask the internet to help you find it (here’s how to do it on Twitter).

I used this approach to find the ultimate Marvel comics fan (turns out there are a lot on Twitter).

Hi internets! Looking for an @Marvel super fan for @Marketplace Someone who lives and breathes #XMen #FantasticFour #Wolverine Ping me!

I’ve also used it to find other reporters to interview for a story on “talking while female.”

Hey lady broadcast journos! I’m writing about complaints we receive for talking while female for @Marketplace Have a good/bad one? Ping me!

It might sound corny, but you have the world at your fingertips with social media. If you’re thinking about a callout, check out these related guides from this site: 6 ways to use social callouts & Use targeted search terms to unearth sources on social Some of the people who responded to my callout on how to find story ideas also suggested:

“Hang around people who do things you don’t do.” Todd Melby

“Listen to your community (old school style, go to a local diner, coffee joint, donut shop). Literally, listen to your community. I heard a panelist one time talking about driving to or from work on occasion with the window open. If you hear something out of the ordinary, find out what it is … BANG … local story.” Brian O’Keefe

“Look on Craigslist. People ask for or seek out all sorts of things. I found subjects for two different stories on there. A woman looking for an altruistic kidney donor and another woman looking to do good deeds for people. She did everything from joining a dinner party to writing someone a love letter when they were feeling rejected after a breakup.” Molly Socha, Journalist

“Take advantage of digital tools to read the pulse of a community. Jennifer Brandel has created a platform that operationalizes tapping into community curiousity called Hearken. Smaller stations use freeware like Google Forms to perform the same function. And then there’s Facebook: KCUR has had a lot of success inviting people to submit what they think the most pressing issue is and they committed to covering it.” Ann Alquist, Chief Progress Officer at Rhode Island Public Radio

This is one of my favorite ways to find new stories. A couple years ago I was assigned a story looking at expensive police lawsuits in New Jersey where officers were being sued. The editors thought it was possible that civilians were suing cops who were causing expensive problems over and over again. But once we looked at the actual paperwork from the lawsuits (piles and piles of it) it became clear there was another problem: police officers were suing each other — more than civilians were! Bottom line: doing research allows you to draw your own conclusions. Instead of being told what to think, you can chow down on the information and come up with your own ideas. Here are some other suggestions:

“I’d like to put in a plug for public records and meetings for story ideas. This includes lawsuits. This is journalism at its base: these are stories that don’t get told until you crunch the numbers in Excel and see the trends, or learn where to find financial data.” Abraham Aboraya

“Yes to footnotes, and in general to things that are briefly mentioned in other work you love. It’s an indicator that the writer/reporter found the tidbit interesting enough to mention, but didn’t have the space/angle to explore in depth. Basically a sign that reads ‘rabbit hole entrance here.'” Jody Avirgan, host and producer, FiveThirtyEight

“Develop a beat. Make a list of who knows a lot in your field (academics, regulators, activists, industry people). Call everyone on that list weekly to catch up on what they’re working on, what they’re watching for, what they’re debating and wondering about. Also, ehrm: learn how to make phone calls.” Brian Edwards-Tiekert, host UpFront (KPFA)

So remember, be curious. Get out there and talk to people, online and IRL. Research — go on treasure hunts for information. Always be on the lookout for story ideas. Micheline Maynard, a senior editor at Here & Now, has a final bit of wisdom: “When you see something interesting — or a change in something — make a note to yourself. A business closes. A new one opens. Or, kids all wearing the same thing. Then, look it up. You get in the habit, you find stories.”

Sally Herships is a writer, reporter and teacher.