You asked: How can I get better at standups? 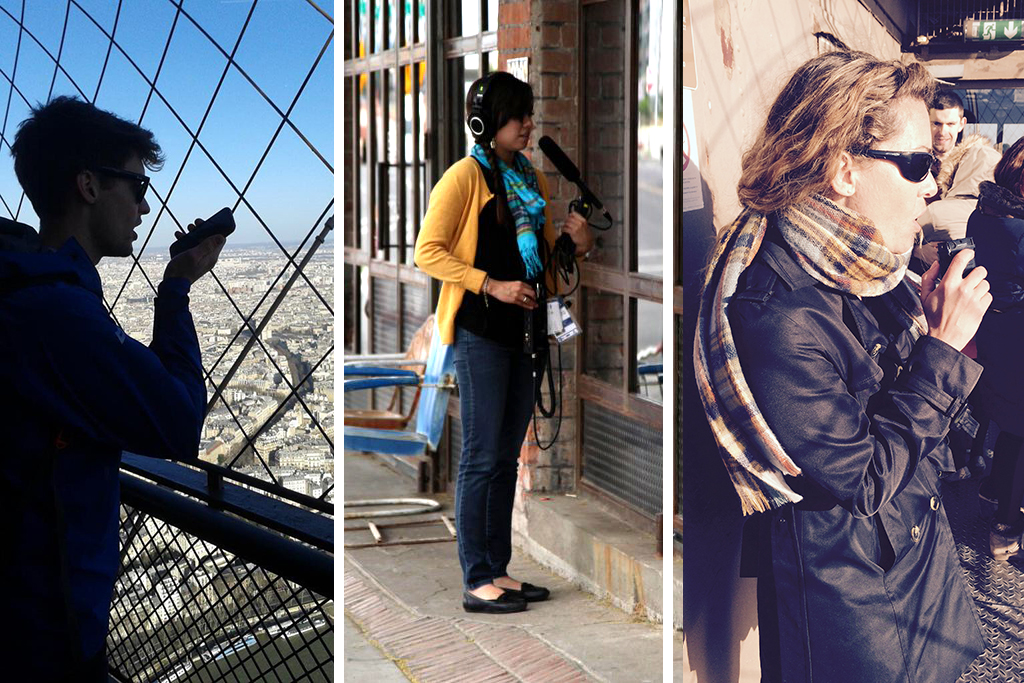 You may feel silly recording standups in the field. But it’s worth it. From left: Former NPR producer Rich Preston, KJZZ’s Mariana Dale and NPR contributor Lauren Frayer. (Courtesy of Rich Preston and Mariana Dale)

On-scene narration, often called a “standup,” can lend your stories a feeling of urgency, momentum and — when appropriate — drama. When we say audio stories “take you there,” standups are one of the best ways to achieve that. You — the reporter or producer — turn the microphone on yourself and give listeners in-the-moment observations or insights.

But … standups are hard to do well. Unlike with scripted material recorded after-the-fact in a studio, you have to walk around in public, talking dynamically into a mic, looking a tad bit crazy.

We received this question from independent radio producer Will Coley:

“How can I get better at standups or on-site, in-the-moment narration (i.e. in the style of Kelly McEvers & BBC reporters)?”

We know it’s a challenge that’s widely shared. So who better to ask than Kelly McEvers herself?

Kelly used to be a foreign correspondent for NPR, and her stories were distinguished by powerful on-scene narration. For example, check out the last two minutes of this story she reported in Damascus, Syria, in 2011.

Now Kelly brings that same narrative style — as a host — to NPR’s All Things Considered and the podcast Embedded. I asked her to talk about how she developed her style of on-scene narration.

Get beyond the ‘capital ‘S’’ standup 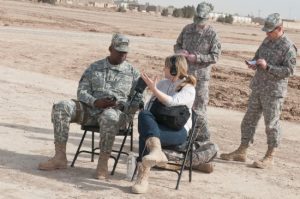 Kelly in Iraq in 2001, interviewing Gen. Lloyd Austin, then-commander of all U.S. forces in Iraq. (Courtesy of U.S. Army).

Some highly respected reporters and producers will tell you: If your narration begins with “I’m standing here …,” you’re not doing it right. That may sound blunt, but they have a point. On-scene narration is best when it adds depth, movement and action to a story. Just “standing here” is a pretty static thing to do.

Kelly says as she developed her skills as a reporter, she worked to get beyond the “capital ‘S’ standup … where you’ve written it ahead of time and … you’ve thought through where it’s going to appear [in your story].”

She was inspired by reporters such as NPR’s Ofeibea Quist-Arcton and former NPR correspondent Rob Gifford:

“What always struck me about Rob and Ofeibea was that they did something totally different. Which was like, ‘I’m here in the moment and I’m helping move this story along as a person’ … You don’t have to be so reportorial. You can just be a person in the moment.”

Think of your microphone as a notebook

Kelly’s standups have utilitarian origins. It’s next to impossible to take notes while toting around recording equipment so she uses the mic as a reporter’s notebook, capturing details.

“I just describe stuff, so I’ll remember it later. But … that description may sound good on tape and it might be something you want to use,” she says. “I’ll do it in a grocery store. You know, ‘The shelves are bare. The only things that are here are one package of ramen and two cartons of milk. There’s no baby formula’ … I’m just taking it down as notes.”

If you’re thinking of your microphone as notebook, the “notes” you take will be extemporaneous, not scripted. The things you’re best equipped to improvise into the microphone are sensory descriptions: what you see, smell, feel, hear and even taste. What’s happening right in front of you.

Save analysis and other stepped-back narration for scripted tracks (unless you know your topic cold). In on-scene narration, stick to simple details.

Kelly says one of her favorite approaches to on-scene narration is counting. As she notices something in the scene that she can enumerate — she counts it out loud.

If that seems a bit boring, consider these examples: Kelly has counted trucks of armed militants pulling into a Syrian town, and in Yemen, she counted the surviving children of a suspected al-Qaeda militant who had been killed in a drone strike:

The counting scene begins at 5:20 in the story below:

If you’re thinking: I don’t cover drone strikes or popular uprisings. How does this apply to coverage of less inherently dramatic scenes?, consider the ways standups can enliven relatively dull environments.

Take the example of covering a city council meeting. Here are just a couple ideas:

You can also measure something on-scene to illustrate its size and/or significance. Here’s an example in which NPR’s Cory Turner, standing in a storage room, uses measurement to make a key point about school textbooks.

The narration begins at 4:00 in the story below:

A few strategies for not looking crazy

It can feel awkward to talk into a microphone, alone, in public. You might feel conspicuous or silly. Our inhibitions can cause us to whisper or sound stilted, neither of which is a recipe for good tape.

Kelly may be uninhibited about standups but she has a few tips for the rest of us:

Talk while things are happening

This point may seem obvious. What better way to capture a moment than to describe it in the moment?

But producer Will Coley, who asked the question that led to this post, raised a practical concern: “Part of my worry in doing standups is that I’m missing potentially valuable ambi.” In other words, if you talk while things are happening, won’t you fail to make an unadulterated recording of that sound?

Kelly’s response: “Whatever ambi is happening would be even better with words on top of it.” Most ambi, she says, still requires explanation. So rather than offer explanation after the fact, just do it in the scene.

Surely, other producers and reporters who use standups less frequently (or are less comfortable doing so) might disagree. Either way, you always need to gather lots of ambi! And when the sound is active or the scene is heating up, you can use a combination of narration and pure ambi-collection to get the mix you need to tell a good, sound-rich story.

Always be rolling — and if nothing’s happening, just talk

“Always be rolling” is a public radio chestnut — constantly repeated, but hard to do. We’ve all had an experience when we knew we should be recording but were too sheepish or distracted to do so.

Kelly takes the always-roll principle and pushes it further. If you’re on-scene rolling, and nothing much is happening, talk. You can gather useful narration and you’ll be ready if something occurs. “You’re going to react anyway,” Kelly says, “So why not have the mic somewhere near your face when you do?”

For this episode of Embedded, reporter Caitlin Dickerson talked constantly into her microphone while covering an immigration court proceeding. In the end, Caitlin’s narration gave the story its chronology, stitched it together and brought it to life.

Do what works best for you!

Accept it; audio stories are not unlike theater — and we have to perform. People who are best at standups are usually less inhibited and have a flair for the theatrical.

But … if standups are about being human, don’t try to be someone you’re not. A standup you record while feeling awkward will sound, well, awkward. Maybe you’re not so loquacious, but you have a great eye for detail, or you ask good questions. Keep rolling and keep talking — and use the bits that sound the best and most effectively serve your story.

A few other examples

There are lots of other ways to play with on-scene narration.

NPR’s Sonari Glinton makes great use of on-scene interviews; in this case, talking to carmakers at the North American International Auto Show:

This HowSound podcast episode about standups features NPR’s Robert Smith, who points out that creating good standups require a ton of trial and error.

In this 2016 Third Coast International Audio Festival talk, Phyllis Fletcher, Managing Editor of the Northwest News Network, offers some great tips on standups, especially in news spots. (If you’re short on time, fast forward to about eight minutes in.)