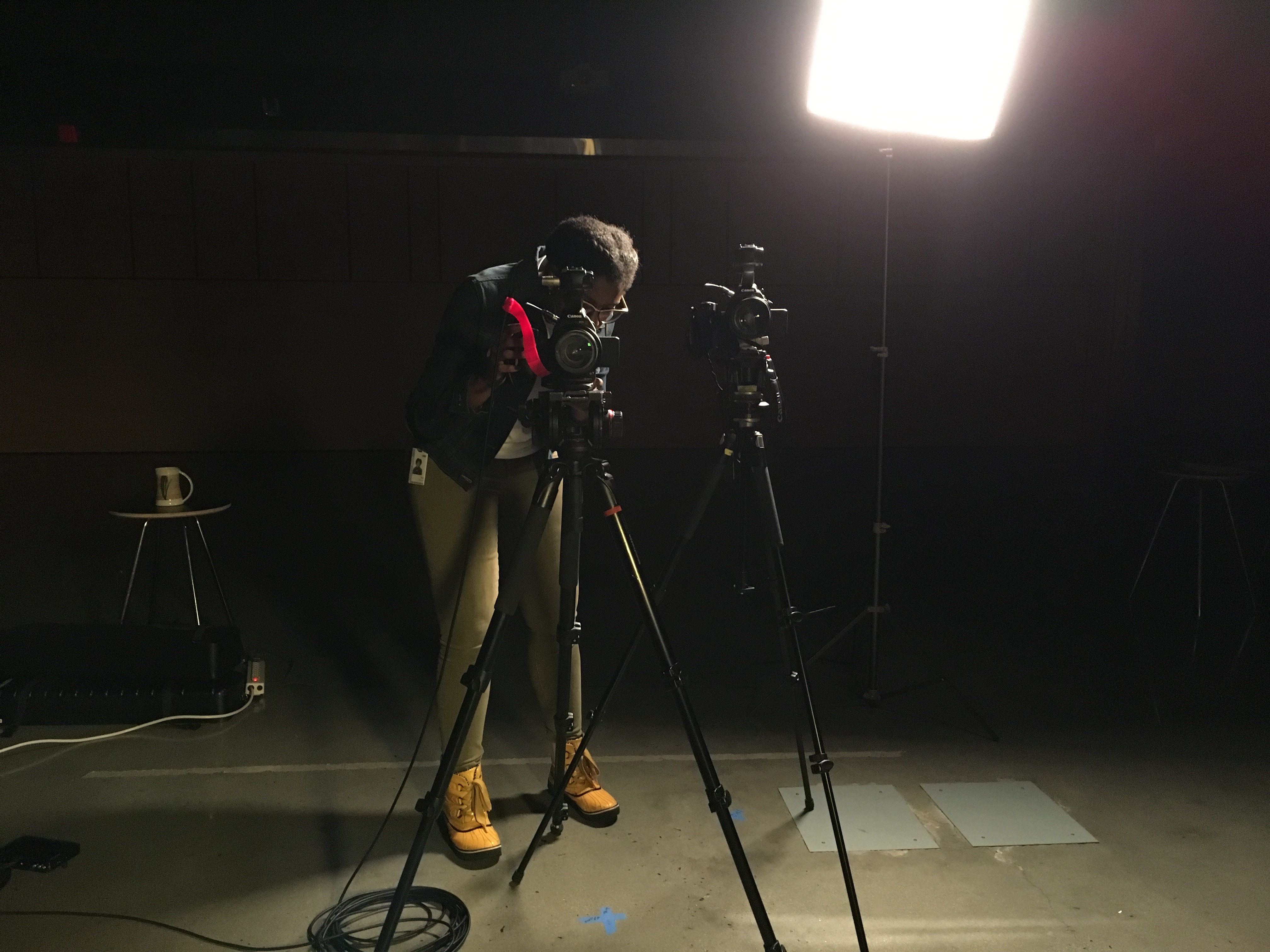 The author tests a shot for the voice training video. (Serri Graslie/NPR)

Most people are visual learners and the digital landscape is becoming more visual every day. So it’s important to create content that includes great imagery. If you’re reading this, then you may want to add video to the mix of elements you use in your work.

My biggest project while interning with the NPR Training team this spring was to produce, shoot and edit a short how-to video on vocal exercises with NPR’s Jessica Hansen. Even though I have a background in video, I’m more familiar with shooting short documentaries or silly, on-the-fly videos with my friends. This was different and required several weeks of planning, lots of equipment and the help of many people.

Although everything worked out well, there are a few things I wish I’d known about the production process before I started. I’ll share them here as things you might consider when your team decides to produce a video.

We receive a lot of requests to help reporters and hosts throughout public radio with vocal delivery — but we can’t fulfill them all. And since vocal coaching is a physical activity, where the students need to both hear and see the correct way to do a technique, a video made the most sense.

But first, we had some questions:

And scope? Our simple, 9–minute video required strategy meetings over two months, two weeks of planning and three days of shooting. And then there were countless hours of editing footage and fine-tuning.

Once we figured out what kind of video we wanted to make, we chose our team.

I learned that it’s best to start by assessing the skills of each person and figuring out how they can help the production go smoothly. Figure out whether you need to ask for help (or hire freelancers if you have the budget for it). Then, designate roles.

Ask yourself, who would make a strong …

Director/project manager — This person is calling the shots during filming and oversees decision making during pre- and post-production. Our Senior Editorial Specialist Alison MacAdam filled that role.

Video producer — This is your lead visuals person, responsible for the look of the video. The producer also handles the scheduling along with coordinating the behind-the-scenes work, helping to write the script and edit the video. That was me.

Audio engineer — It makes a huge difference to have someone on the team whose main concern is getting good sound and ensuring that the audio part of the recording goes smoothly. Our Senior Production Strategist Rob Byers filled this role alongside NPR engineer J Cyzs.

Talent — Think about the role your talent will play and consider their needs during the production process. How much involvement will your subject have in making the video? Will they be hands-on from beginning to end, or will they only be a part of shoot days?

These roles might be slightly different depending upon your team and your project. Roles can be consolidated and team members can have multiple roles, as I did.

This isn’t something that has to be set in stone, but it should be a guideline for getting things done. Figure out your can’t-miss deadlines and back time the smaller deadlines from there.

For example, this is what our schedule looked like, straight from my calendar, in the final week of pre-production:

March 31
Meeting and run through of script

Hold meetings to check in with your teammates throughout the process to make sure everyone is on the same page. When you get to the editing stage, these meetings will become reviews where you will want to occasionally get feedback from people outside of your team who can bring an objective eye.

As we got closer to filming we consulted with Claire O’Neill, an experienced visuals producer, who looked at our pre-production and post-production processes. Through some of her questions and advice we were able to simplify our workflow and make some critical changes. For example, we changed two of the locations for the video. We’d hoped to show NPR’s Sam Sanders doing voice exercises in his car, but Claire suggested that it would be too complicated and that the quality of sound and visuals would be inconsistent with the other locations. 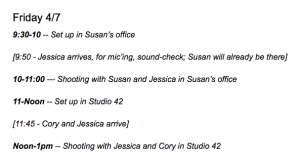 An excerpt of our shooting schedule.

Lists are your friends. Make a list for everything and include all the tiny details — from bottled water for the talent to backup batteries. Good organization is key to making things run smoothly because you will forget something. A shot list and shooting schedule will help guide you during the shoot.

Test every shoot location well in advance. This is the time to set up your scene, make sure the lighting is correct and test your audio and camera settings. You want the shoot day to be as controlled as possible, so try to set everything up on test day the same way you’ll set it up on filming day.

Left: NPR Training’s Rob Byers acts as a stand-in during the test shoot. Right: A screenshot from the video, taken from the same angle. (Bria Granville/NPR)

Remember that not everything can be “fixed in post,” so try to be extra picky about every scene. Don’t be afraid to do extra takes. It’s better to get a good take in the moment than to find yourself wishing you could change it later.

6. Don’t stress yourself out!

Know that if you’ve done everything else, you’ll be fine.

Bria Granville was the video storytelling intern on the NPR Training Team for the 2017 winter/spring semester.