How to make local listeners care about your story

If you’ve ever wondered if your listeners were hanging on every word of your story or podcast, we now have some hints. 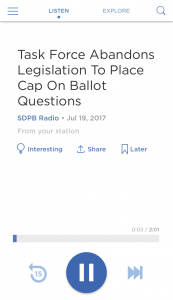 We can judge a story’s performance in NPR One based on when users tap the “share” button, mark it as “interesting” or stop listening altogether.

Data from NPR One provides a rare glimpse into how people listen. This is the sort of data podcasters have been begging for from Apple (and they’re finally getting it). But at NPR, we’ve been examining and sharing this kind of data for the past two years.

Not only do we know what stories people listen to, we can see if people keep listening and for how long. By examining second-by-second data, we can tell when a user stops listening, taps the “share” button or marks the story as “interesting.”

The greatest value in this information is not what it tells us about one story’s performance. It’s in the lessons it holds for future stories. How can we frame and write them so that they become must-listens?

We have already shared some lessons NPR One data can teach podcasters. Now, we have some key lessons for audio journalists. We’re previously written about local stories that inspire passion in listeners.

We did a little more experimenting and found that the stories that hold people’s ears typically have at least one of the following frames at play:

Across the country, public media stations offer hundreds of stories on the NPR One app each day. That’s a pretty large data set. We wanted to design an experiment to understand which of those stories performed best. So we decided to evaluate stories based on “completion rate” (the rate at which listeners hear the whole story).

We gathered a working group with representatives from NPR Member stations in Maine, Michigan, Missouri, South Dakota, Vermont, West Virginia and Wisconsin, and analyzed 921 stories they placed in the NPR One feed over three months. To measure performance, we considered the actual completion rate versus the expected completion rate for stories of similar duration. Then we zoomed in on the stories that emerged with higher-than-average completion rates.

While we can’t know for sure why listeners finish any one story, data tells us something in the aggregate.

Whether we look at feature stories, interviews or podcasts, we see more and more evidence that the first few sentences of your story are crucial.

Former NPR One Managing Editor Sara Sarasohn drew on app data and her editorial experience to show how a story’s lead sets it up for success. Leads that begin with big, “grabby” ideas outperformed those that started with time pegs (e.g. “Today, the Senate voted on health care …”) or convoluted connections to news events.

We saw the same phenomenon in this latest experiment. Here is an example of a “grabby” intro for a Michigan Radio story that performed well:

“Now, a mystery of missing money. A Republican campaign committee is facing big fines and lots of questions over how it lost track of many thousands of dollars during the last election.”

We don’t typically think of stories about campaign finance as captivating for listeners, but the power of the introduction — and the framing of a mystery — made the difference.

NPR One data shows us that in the opening seconds, listeners make decisions about whether to skip or pay attention to a story. They need to understand why they should care before they know what happened. The news peg might be important to us as journalists, but the data suggests our listeners are more interested in why the story matters to them.

Use frames that set your story apart

As we searched for patterns in the top-performing local stories, we saw that certain types of frames kept emerging. These stories made their frames clear from the opening moments. 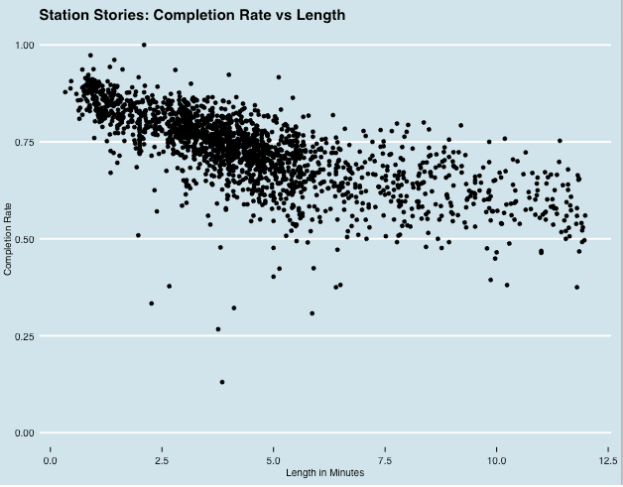 Length is a very important factor in determining the completion rate of a story. For our analysis, we isolated the stories that performed above the average in terms of completion rate for similar length stories. The curation group saw more stories performing at or above the expected completion rate as time went on.

We saw time and again that successful stories started strong by quickly helping listeners understand what the story means for their communities.

In this research and in other analyses we see that length is a factor in the success of a story. We’ve found that for all stories — local and national — 3.5-5 minutes is a sweet spot. The performance of pieces longer than 5 minutes varies wildly.

While people will listen to longer stories, the quality has to justify the length, and that bar is high. Beautifully told stories and stories that are of great importance can do well when they are long, but our data suggest that when in doubt, keep your stories short.

How to use these lessons

NPR One might be a mobile listening app but these lessons have broader applications for all audio stories.

Emily Alfin Johnson, the head of Vermont Public Radio’s Digital Creation team, says when VPR reporters wrote story intros using insights from NPR One, they saw improvements in how the story performed with both listeners on the app and readers on the station’s website. She said it meant “there was more good stuff at the top of stories” because reporters worked to include grabby ideas and explain what was at stake.

Johnson believes NPR One data has strengthened her ability to say, “You need to make a change and I can show you why.” In turn, her colleagues’ work can have more impact.

Ultimately, none of these findings are radical departures from what good editors have long known about effective audio storytelling. Renita Jablonski, Senior Editor of NPR’s All Things Considered, says NPR One data “hammers home why good writing matters and hammers home what resonates with people.”

Tamar Charney is the Managing Editor of NPR One.

Nick DePrey was the digital programming analytics manager for NPR One.