What's in your bag, Gregory Warner?

For this month’s What’s In Your Bag we reached out to Gregory Warner, host of the new NPR podcast Rough Translation. His work has taken him across Pakistan and Afghanistan, and now he is based in New York City after a long stint as NPR’s East Africa correspondent. He carries all of the essential gear — including a backup! — in a small package. This post originally appeared on NPR correspondent Elise Hu’s blog, but includes an update at the bottom from Gregory’s time developing the podcast, which launched this week.

I’m writing this from a tiny airplane from Kigali, Rwanda, back home to Nairobi (in theory — we’ve been sitting on the plane for over an hour), so in deference to my seatmate I took two tray-sized photos instead of one big one. 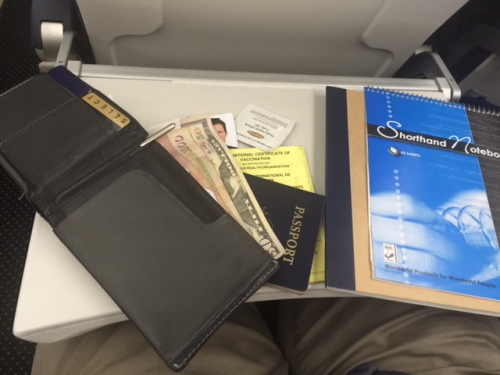 Wallet by Belroy. I like that it’s big enough for a passport and has pockets sewn in the lining for things you just want to know you have handy, like extra visa photos and antiseptic wipes. Oh, and it has a pen!

My notebooks. A generic steno pad from the stationary store in Kenya for interviews, and a MUJI notebook for notes afterward. 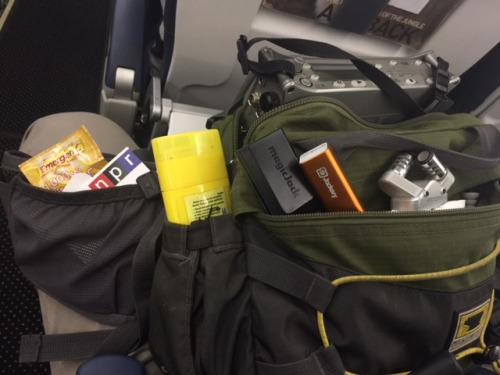 Pictured, from left to right:

Mountainsmith bag. The day I was supposed to fly out for my new NPR gig in Nairobi, I got the flu. I rebooked for the next day, and that night felt well enough to walk around and say a last goodbye to NYC. I ended up buying this bag because my friend Lu Olkowski recommended it. Three years later, it’s with me everywhere. It’s not perfect for my purposes (could be a bit longer for a shotgun mic) but it’s well made. It’s nice to have a kit bag on your hips rather than the shoulder straps and it has those easy-access pockets in front for pulling out your business cards in crowded situations when you don’t want to pull out your wallet.

Emergen-C packets. Add to your water for all those electrolyte-deficient moments in the field.

Roll-on sunblock. Because who wants to deal with the squirt bottle at airport check-in? Plus, makes for easy reapply on the run.

MagicJack. VoIP phone that plugs into your USB jack. I have a U.S. phone number that follows me everywhere and sends voicemail messages to my email.

The orange thing is a USB battery pack from Amazon.

Zoom IQ6. Attaches to your iPhone to become a Zoom recorder. This is my backup recorder and also the one I use in a pinch in press conferences. It’s got a tiny windscreen as well.

The bit of white under the IQ6 is a flattened roll of toilet paper, which usually lives in a little pocket inside the kit bag. For those emergency moments when the public toilet is only a hole.

Headphones. A bit hard to see on this photo, but my headphones are in-ear Etymotics. Light, easy packing, and unobtrusive.

Sound Devices 722. The mother of recorders. Records to both compact flash card and internal hard drive so you always have a backup. And it has all kinds of other weird features that you think you’d never use — until one day, you do. For instance, “stealth” mode makes the recorder completely black — no lights at all — which I thought was just for sketchy, secret recordings, but became essential when doing this story about Nairobi’s first “Dinner In the Dark”.

I’ve spent most of the last year developing Rough Translation. As host of the show, I’m on the road less often than I was while in Nairobi, but I travel to a wider variety of places. That’s meant adopting some new tools. And while making radio can be a solitary art, making podcasts is a lot more collaborative.

So here are three things that I have found a new place for in my kit bag (or more often, facepalm myself when they’re not there):

BRCK. With 3G networks now in more and more places on the planet, there seems to be less need for expensive satellite phones that charge many dollars per megabyte. BRCK is an amazing device invented in Kenya that provides internet access almost anywhere using standard SIM cards. So how is that different from making a hotspot with your smartphone? The answer lies in the antenna thing sticking out like a weird-looking oar. A stronger antenna means a faster signal and wider range. So not only does this thing get 3G when your iPhone says “no service,” but it also has much faster download and upload times. 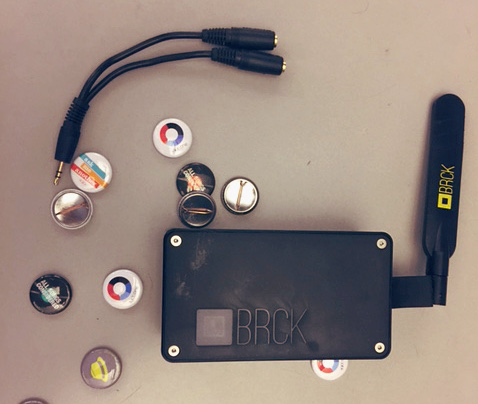 Headphone splitter. I am embarrassed to include this one because it may be the least tech-fancy, most humdrum thing in my kit, but man, when you don’t have a splitter it’s a lonely day in the field. As I mentioned, podcasts are collaborative by nature. Invariably there will come a time when you want to listen to the same thing your collaborator is hearing, instead of watching her enjoy herself listening to good tape while you sit there like a dope in silence (or vice versa). One of our first reporting trips for the new podcast was to Brazil. On that trip our producer, Jess Jiang (formerly of Planet Money), whipped out a headphone splitter at a crucial moment of field editing. At that moment, I knew I was in great hands. The splitter pictured is actually hers.

Sennheiser EW-100 wireless lavalier microphones (not pictured). There are many excellent reasons for radio producers not to use wireless lavalier microphones, the classic clip-ons that are so beloved by TV people. Among them: battery management, RF (radio frequency) interference and clothing noise (which can be quite distracting). You can lose any sense of perspective because the microphone will always be close to the speaker, even when they should sound like they’re across the room or halfway up the side of a 100-foot cliff. Clip-on mics can never give you that intimate, whisper-in-the-ear sound quality of the shotgun microphone. But here’s the secret: when you need them, you really, really need them. I’ve used lavaliers in interviews with someone giving me a tour of his slum (who had very good reason not to call attention to a microphone) and a runner I couldn’t keep up with. What you lose in sound quality, you gain in access (and there’s always the outside chance you might catch a serial murderer).

What’s in your bag? is a regular series about the tools used by people in public media. We all use the basics (like a mic and headphones), but the way we personalize our kits is where things get interesting — and where we can learn from each other.

Whose bag should we open next? Let us know at trainingteam@npr.org or on Twitter!