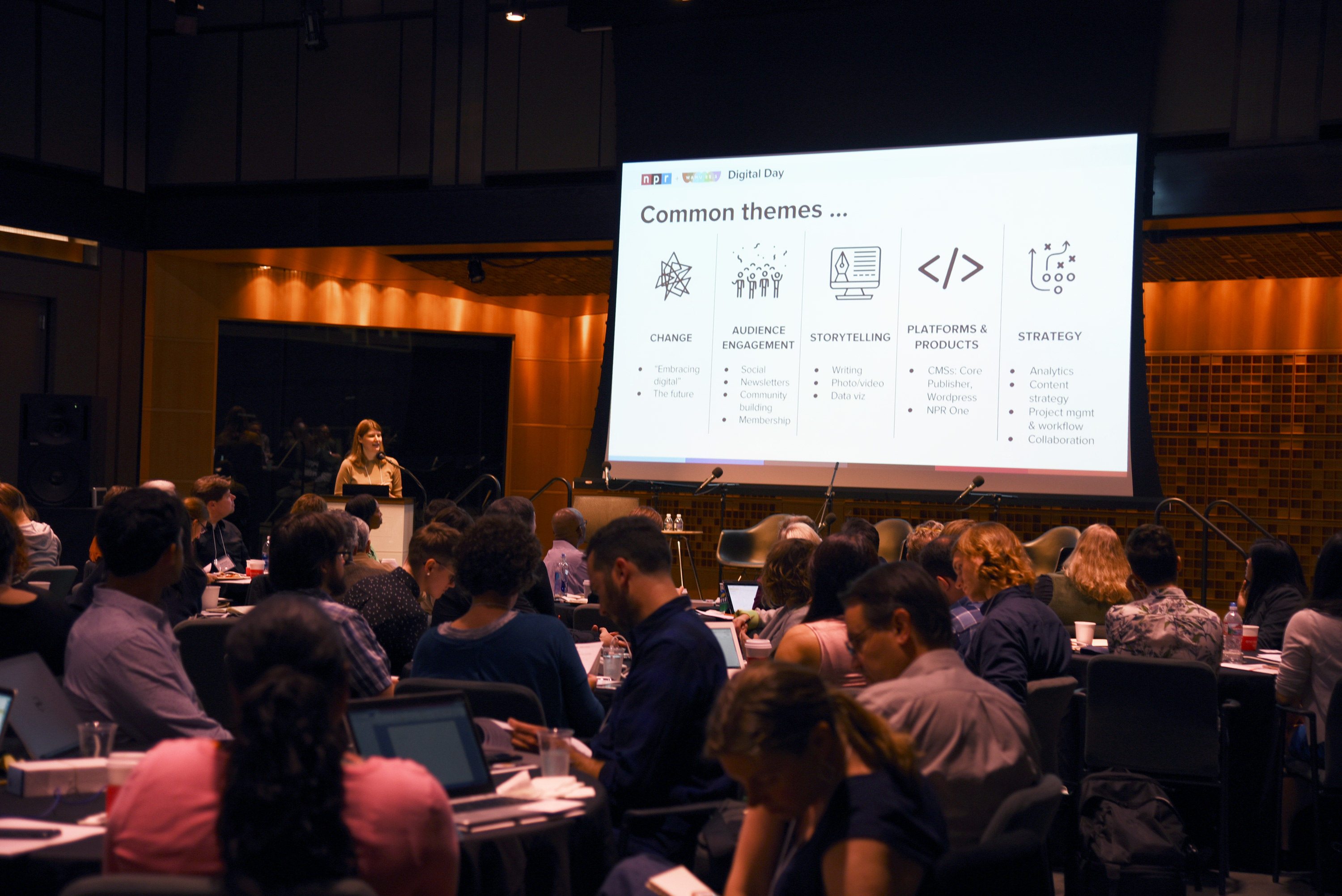 Like most news organizations, the challenges facing public radio are large and varied — and many of them include the word “digital.” Earlier this week, NPR and Washington D.C.’s WAMU co-hosted a rare gathering of digital staffers from NPR and Member stations ahead of the Online News Association conference. Dubbed “Digital Day,” it was a chance to meet in person and develop fresh ideas about how we might tackle our shared challenges and better serve our collective audiences.

Attendees heard from digital leaders at NPR and stations who shared best practices and case studies on a variety of topics in digital journalism, including audience engagement, change, strategy, platforms & products and storytelling.

We’ve highlighted some of their lessons below, along with links to slides and handouts. Find the full agenda here and catch up with the conversation on Twitter.

Newsletters take work — and a bit of trial and error. If you’re thinking about launching a newsletter, take some time to learn from NPR’s Senior Product Manager for Listener Journey, Lauren Bracey Scheidt, and three public media stations that have been there and done that (and are still rocking it).

WBUR in Boston, KQED in San Francisco and St. Louis Public Radio each have their own strategies for newsletter management but share some common practices.

Know who your audience is and how they engage with your newsletter — then interact with them. Ki Sung, a senior editor with KQED’s MindShift, spends a couple of hours every week engaging with readers who mention MindShift on social media.

Like with story or social media planning, you should have a game plan for newsletter creation and distribution. For your workflow, identify who will tackle which parts of forming the newsletter and when their work should be completed. Brendan Williams, a digital media specialist who works with St. Louis Public Radio’s Look Read Listen newsletter, says you can’t experiment with what works for the audience if you don’t have a system in place.

A product management approach to content development and testing

Loop in all the departments involved with producing the newsletter for testing what works and what doesn’t for the audience. WBUR’s Executive Editor for Digital, Tiffany Campbell, said the station’s product managers and newsroom had different questions about the success of their limited-run podcast newsletter, Magic Pill, so they built a joint learning plan to address them all.

The internet is great for sharing your stuff, but it’s also great for meeting your audience where they are — and staying there with them. Niala Boodhoo, executive producer and host of Illinois Public Media’s The 21st, and Gabe Bullard, producer for WAMU’s 1A, focus their digital strategies on connecting with listeners, not accumulating clicks.

On @21st, we use Reddit, Twitter & FB for marketing and production. Here’s one guest we found via FB: https://t.co/8mmxXt1tWh#nprdigital

Using social media platforms does provide a boost in web traffic for 1A, but page views aren’t the goal, Gabe says. “The engagement is about making this show as good as possible for the people who tune in.”

They say different social platforms are good for different things:

3.) Public radio listeners are a key demographic in the smart speaker market

4.) Talk about the digital story early and often

It can’t be emphasized enough: good digital storytelling begins in the planning phase.

Teresa Frontado, the digital director at WLRN in Miami, has some tips on how to better integrate radio and digital story production. It starts with tackling the workflow.

Before a reporter heads out on assignment: Have a conversation about the story idea with both radio and digital editors. From there, define digital assets and engagement tools, then talk about deadlines.

While the reporter is in the field: Make sure the assignment responsibilities include gathering audio, images, video, documents, data, maps, etc. Think about how different assets can enrich reporting.

When the reporter is back in the newsroom: Tackle the story for both mediums — write the audio script and digital version. Then, send the work for edit and production. Finally, share it. (At WLRN, a story airs on radio, publishes on website, becomes available on an app and is then circulated on social.)

Related NPR Training post: How to weave audience engagement into your reporting process

5.) You are not a robot — quit tweeting like one

Brandon Echter, the digital managing editor for Science Friday, says there are a couple of accounts you can draw inspiration from. Like Wendy’s.

Fresh, never frozen since 69
Trying to cop that mixtape, better get in line
Grabbed a couple wings now you’re trying to fly
But nothing gets ’em dipping like a Frosty and fry
? https://t.co/lv62Mqr2f7

Brandon also points to ProPublica as a news organization that has a strong voice on Twitter. He says they do a good job threading and creating a narrative through with older stories.

1/ Today we have the story of when @IvankaTrump and @DonaldJTrumpJr were almost charged w/ felony fraud. Let’s break it down. Ready?

So, how do you make your branded account sound human?

Answer this question: If your organization and/or radio show were a human, who would they be and what would they care about? That human shouldn’t necessarily be your public face or show host (you never know when they might retire or leave).

For Science Friday, that meant thinking of themselves as “the really excited person at a dinner party who wants to tell you about this cool thing they learned.”

6.) Social audio offers something, but not everything

Is social audio the panacea for non-visual content? The short answer: No.

Mathilde Piard, a project manager in NPR’s Programing department, says getting people to listen to audio on social media platforms is hard — and the context in which people listen to it is important.

A key reason social audio is hard: Most people scrolling through social are not in the mood to listen – @MathildePiard #nprdigital

She says automated video clip players, like “audiograms,” are a nice option because they require a low lift and are worth it if you don’t have better social or visual sharing options. Hand-crafted video animations, on the other hand, only justify the additional labor if they will have a large audience, she says.

Slides: Social audio: Is it the panacea for non-visual content?

7.) Think before you boost

If you’re going to spend money boosting the reach of your social media posts, Adrienne Lavidor-Berman, digital revenue and marketing operations manager at WBUR, says you should consider a few things first.

Slides: To boost or not to boost? How to use paid social media to drive listening

Facebook groups can be great for building community around issues listeners and readers care about. But if you’re starting one for a newsroom project, have a maintenance and troll plan in place.

WAMU’s audience editor Chris Chester and KCRW’s senior digital editor, Caitlin Shamberg, have both created groups for podcast projects — Metropocalypse and There Goes the Neighborhood: Los Angeles. They shared some tips on managing Facebook communities for anyone thinking about making a Facebook group around a story project or a certain issue.

Think about the audience first

Who would want to join this group? Are there enough people interested in this topic? Does this issue/beat have a large following already?

.@ChrisBChester: The beauty of the Facebook group is that it has low stakes and is good as a testing ground. #nprdigital

Consider how the organization will be involved in the group

Who will moderate comments or enter into discussions with group members? Could that be a podcast host, reporter or a group of people?

Look at ways the group can be a community