Casting, coaching and cutting: A producer’s guide to 'unmoderated conversations' 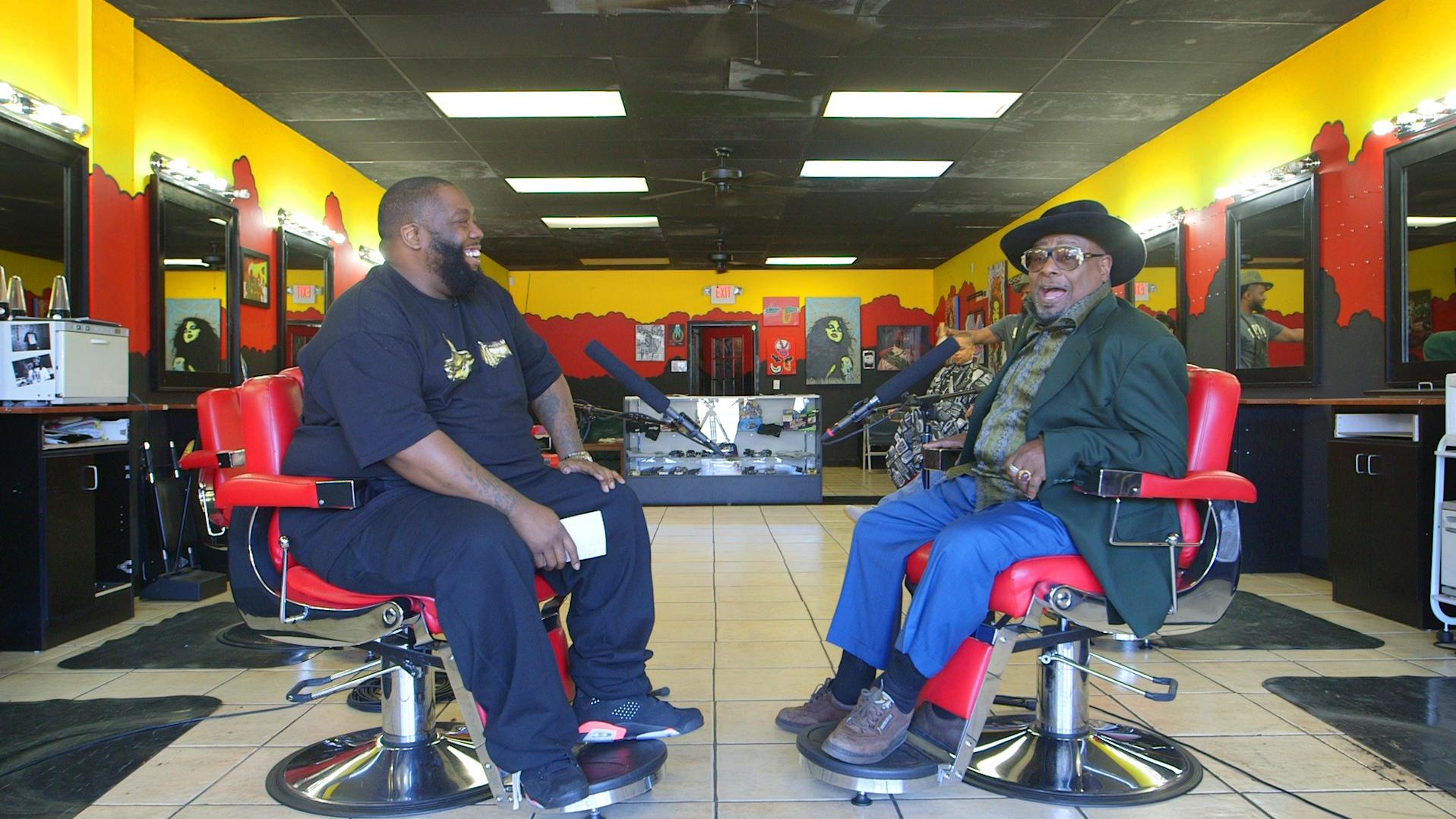 If you get everything right in an unmoderated conversation, you’ll leave the listener with the feeling that she’s right in the room. Here, musicians Killer Mike and George Clinton talk about barbershops, music and life. (Nickolai Hammar/NPR)

I’m a producer on All Things Considered, so I spend a lot of time listening to people talk — during pre-interviews, in interview tapings and over (and over) again as I edit audio.

Despite this constant immersion in human speech, I catch myself eavesdropping all the time. I’ll crane my neck to hear a mom explain something to her toddler in the grocery store checkout line or surreptitiously listen in on a couple arguing on the subway. There’s just something inherently thrilling in hearing two people have an authentic conversation.

As journalists, we can harness that power and capture an interaction that grabs a listener’s attention and lays out the stakes of a story better than a scripted piece ever could. We call it an “unmoderated conversation,” where people talk to and interview each other without the intervention of a host.

It’s not easy; just sitting two people down and saying “go” doesn’t always make for a great conversation. Most people don’t naturally tell stories in a way that sounds good on the radio. And real eavesdropping is off the table because it’s unethical to record without a subject’s knowledge.

I’ve experimented with the unmoderated conversation format in NPR’s Been There series. It pairs someone about to go through a big life change with someone who has faced the same challenge and come through it.

I’m continually amazed by the intimacy and candor of these conversations. This one is between a woman expecting triplets and a mother of grown triplets.

Along the way, our production team has developed a set of strategies to find the right topic, audition subjects, and prepare them for a conversation. We’ve also learned techniques from other folks who do this really well, like StoryCorps. In this guide, we lay out some principles that anyone can use when recording unmoderated conversations.

Consider whether it makes sense for your story

There are many ways to use conversations like this in a news context. You can use them as a standalone element (like in a Been There or StoryCorps conversation), in a self-recorded “audio diary” or as part of a more traditional story with a journalist narrating.

Here are just a few examples:

These conversations work because there’s a compelling reason for two specific people to be talking to one another. As Jasmyn Belcher Morris, a senior producer at StoryCorps, puts it: “If you can raise the stakes in a conversation, you should.”

In StoryCorps, the participants are generally close friends or family members — or people brought together by a specific event. In Been There, the participants are strangers. There is built-in tension because one person is starting something big — and potentially frightening — and really hungry for advice. In Heavyweight, the guests are explicitly looking for closure on an event from their past.

It’s crucial that your guests be great, illustrative talkers. Look for someone who isn’t too long-winded or meandering and who uses stories or illustrative examples to explain what they mean — showing, more than telling.

But it’s a balance; you can pre-interview too much. You want to preserve spontaneity and you don’t want your guests to sound too rehearsed. Jasmyn says that if they have talked through every last thing they might say in an interview, it can “ruin the magic” of a genuine conversation.

Once you’ve identified guests, you’ll need to do some work on the front end to make sure you elicit the best conversation possible. That probably means working with one or both of the guests to come up with a list of questions to ask each other. Doing this helps give the conversation structure and narrative. We’ve also found it helpful to designate a primary “asker” — for Been There, it’s the guest who is at the beginning of their big life change.

Things to think about when crafting questions:

Want to try it yourself?

StoryCorps has many guides for conversation participants, including great questions, interview tips and more.

Radio Diaries has a thorough guide for radio diarists. It’s a beginner’s radio handbook, but it will help you think about how to orient your guests to audio interviewing.

Emphasize to the guests that they should not read directly from their lists of questions. Nothing sucks the spontaneity out of an interview like the voice of someone following a script. For Been There, I usually tell guests to bring the questions with them but to keep the paper face down. They can refer to the list if the conversation starts to lose momentum or they get off track.

Give your guests a crash course in radio

You’ll need to coach the guests on the basic mechanics of making radio. If they’re going to record in a studio, walk them through exactly what will happen when they arrive. Where will they sit? Who will they hear in their headphones? This may be their first experience with any of that, and it is important to put them at ease.

Be a gentle guide during the taping

Once the taping is underway, your job is to judiciously guide the conversation. Unlike a traditional interview, you won’t have the luxury of being able to ask clarifying questions, interject with parenthetical explanations or re-ask questions if the first take doesn’t work.

But you can continue to coach, carefully, from the sidelines. You should know the two or three things you heard in pre-interviews that you definitely want out of the conversation — a heartbreaking moment, a surprising pearl of wisdom, etc. — and make sure the guests get there.

Of course, you don’t want to put words in their mouths. It is ethically problematic and, on top of that, can make your interviewees sound like hostages reading a ransom demand. Instead, you can say things like, “We’re halfway through our time. These are a few topics/stories we discussed beforehand that I haven’t heard yet. Would you like to ask about some of those?” Or, “I think we need to hear more about ‘X.’ Do you want to ask some questions about that?”

Listen carefully to how your guests ask and answer questions. The conversation will need to hang together coherently when you edit it, especially if you plan to completely avoid using bridge copy or narration to connect different chunks of the interview.

For example, the guests may exchange roles over the course of the interview, sometimes asking questions and sometimes answering. We’ve found it helpful to ask guests to signal this switch, by saying things like “I actually have a question for you,” to make sure the transition sounds natural.

You’ll need to help the listener follow the chronology. “You [the journalist] can’t say, ‘Okay, now we’re jumping ahead 20 years,’” Jasmyn says. “You have to make sure the storytellers are doing that.”

And if you jump in yourself to ask a follow-up question, like “When did that happen?,” make sure the guest answers in a complete sentence since your question won’t be in the final product. If they just say “1947,” that’s not going to help you.

That said, try not to intrude too much, especially in emotional moments. “I think it’s easy to want to jump in and change the subject or come to somebody’s rescue,” Jasmyn says, “But it’s really important to sort of sit back, and allow people to recover themselves and come to a conclusion or a final thought themselves.”

Remember that genuine moments are the reason you’re creating an unmoderated conversation in the first place.

Cut everything that isn’t amazing

Now that you have a lot of tape (often an hour or more), you will have to be ruthless in cutting it down to a listenable length. You’ll have to lose a lot of material you love.

One strategy is to pick the one or two moments, ideas or stories you know must be in the final cut. Then keep only what you need in order to maximize the impact of those moments.

In Been There, we keep an ear out for things that surprised us. Often it’s a question we would never have thought to ask.

Sometimes it’s a moment of recognition between guests — a sympathetic back-and-forth that is only possible because they have a shared experience; a moment you couldn’t capture in a traditional interview. For example, in this conversation between two transgender men, they discuss the pressure they’ve each felt to suppress gestures or mannerisms that could be interpreted as feminine (starts at 3:00).

Jasmyn takes a similar approach with StoryCorps. “You cut away all the fat, anything that might muddle the heart of the conversation, any repetition,” she says, “anything that doesn’t move [you].”

If you get everything right, you’ll leave the listener with the feeling that she’s right in the room, sitting across the table from these two people.

Apply these lessons to other storytelling scenarios

At NPR, we’re looking for opportunities to take this approach to other newsmagazine segments. Story Lab senior producer Michael May was involved in launching Been There on All Things Considered and wanted to see if the format could be used to shake up a more traditional radio staple: the celebrity interview.

Michael, along with producer Vince Pearson from Morning Edition and members of our Visuals team, brought together musicians George Clinton and Killer Mike to talk about their experience running barbershops — which sparked a deep conversation about their approach to life and music.

Like with Been There, it required a lot more preparation than a traditional interview. Michael says he spent an hour with Killer Mike — the “asker” — outlining the conversation.

“But it was worth it,” Michael says. “Ironically the actual result felt spontaneous — like two old friends just hanging out.”

Connor Donevan is a producer for All Things Considered and creator of the Been There series.