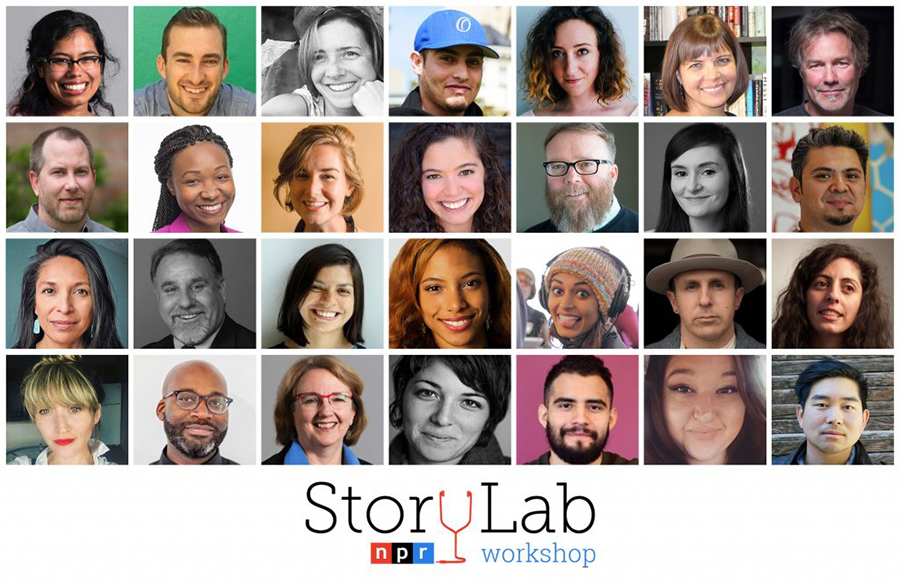 In partnership with the Association of Independents in Radio (AIR), we invited Member station and NPR staff, along with independent producers, to pitch ideas for audio projects that will break traditional formats and reach new audiences. We received over 100 applications from all over the U.S. and beyond. Every application was reviewed by a team of judges, including members of the NPR Training team, NPR Story Lab, NPR and Member station journalists, former workshop participants and AIR.

During the workshop, teams will work on their projects with mentors from across NPR, while attending sessions designed by the NPR Training team to foster innovation and excellence in journalism and storytelling. Follow along with #nprstorylab on Twitter.

Read more about the projects below (with working titles that may change):

A prison for 130 years, McNeil Island in Washington state operated far longer than the more well-known Alcatraz island prison. When the state’s correctional center on McNeil Island closed in 2011, it was the last prison in the nation only accessible by air or water. McNeil’s long and complex history as a territorial, federal and state prison can illuminate how incarceration in the U.S. has changed over time in response to ever-evolving social views of crime and punishment.

The gubernatorial race in Kansas is expected to be extremely crowded and voters are prepared for a wild ride along a shifting political landscape. “My Fellow Kansans” will tell the stories of the candidates and the people they seek to represent through what could be a historical moment of change for a state that is known as being its own worst enemy.

What happens when a refugee enters the United States? How do they move from a newly arrived immigrant to becoming an American citizen? Through the narration of Afghan journalist and recent U.S. arrival Zar Wahedi, listeners take a journey through the resettlement process and the individual successes and barriers along the way.

Not everyone who identifies as Muslim identifies as religiously Muslim. Coinciding with Ramadan 2019, KPCC Productions will release a non-narrated podcast that profiles one American Muslim every episode. “Tell them, I am…” explores the diversity of people who consider themselves religiously or culturally Muslim, asking them to reflect, not to represent.

Montana is world famous for its pristine natural environment, but it’s also home to America’s largest Superfund site (in Butte) and numerous other wastelands of its industrial past. Over the years, various well-intentioned economic revivalists and snake oil salesmen have proposed solutions to alchemize mine waste into gold — first with the environmental restoration industry, now with bitcoin miners putting out shingles in historic hard rock mining towns. This series of stories will pick at that scab of the Treasure State’s collapsed pride, and efforts to process its toxic shame and legacy into a new identity and economy.

ArtiFact: A Journey Into The Shadowy World Of The Indian Antiquity Trade (Boulder, Colo.)

Operation Cerberus was the largest raid of Native American artifacts in U.S. history. Dozens of people were arrested in the desert Southwest in 2009 and four people committed suicide in the aftermath. ArtiFact revisits this history against the backdrop of the former Bears Ears National Monument — a landscape filled with ruins and sacred sites — where looting has occurred for decades. Our driving questions: What really happened that infamous day in 2009 and what do we really know about the shadowy world of artifact trading? Why does artifact trading still thrive despite federal crackdowns?

Inside my head, there’s a loud cruel voice that tells me I’m stupid, selfish, ugly, slow, strange, unworthy, un-American, un-talented, phony, dirty, boring, arrogant, lost and screwing up. A lot of people have a voice like mine. In this series, we will listen to the voice of self-hatred in a diverse group of women and ask the question: Where did this voice come from?

Proyecto Santuario explores the history of San Francisco as a “sanctuary city” through the lens of the city’s Central American community. It was the arrival of Salvadoran and Guatemalan refugees in the ‘70s and ‘80s that spurred the city to pass the country’s first sanctuary ordinance in 1989, as a way of shielding these new residents from deportation to war-ravaged homelands. We will hear from original sanctuary refugees whose voices have been all but erased in today’s fierce national debate around sanctuary status; a debate fueled by the current administration’s belief that such cities are safe havens for “criminal aliens.”

Stolen Sisters is the working title behind a multiplatform media project intended to amplify voices in memory and in unresolved search for hundreds of missing and murdered Indigenous women, girls and transgender people in America. There are so many disappeared Native women that no really knows for sure — and the pile of cold cases of the murdered continues to mount. Across broadcasts, short films and events, Stolen Sisters aims to gather and share stories from individuals whose lives have been directly impacted by extreme rates of violence against Native American and Alaska Native women — an injustice widely described as an “epidemic,” yet chronically ignored.

A short-run podcast series of approximately 6-8 episodes that explores the intersection between hip-hop and mass incarceration. Each episode will tell the story of a different artist — in his/her own words — using their career arc, music and imprisonment to contextualize various aspects of the criminal justice system’s disproportionate impact on communities of color, while also examining the rap industry’s commodification of criminality. Combining elements of true crime storytelling with celebrity interviews (conducted from prison when possible) and in-depth commentary, episodes will parse artist narratives with insight from music and culture critics, legal experts and advocates of criminal justice reform.