Pronounce like a polyglot: saying foreign names on air 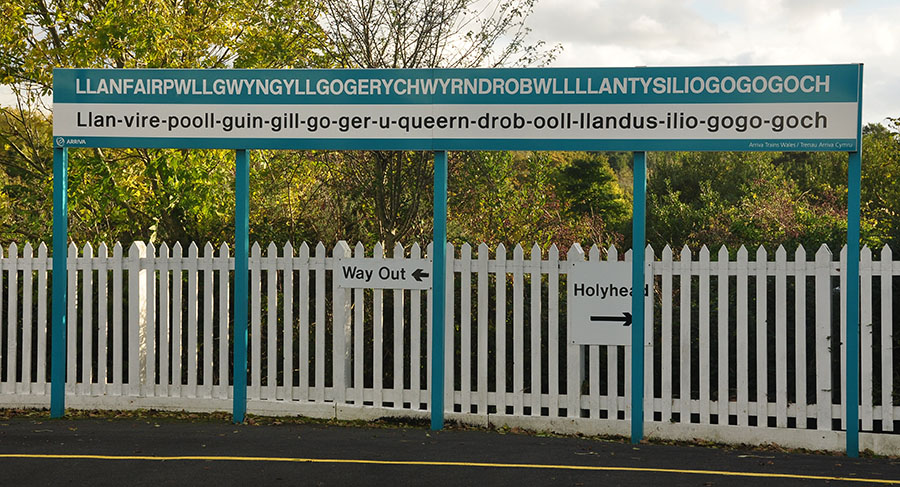 A railway station sign in Llanfairpwllgwyngyllgogerychwyrndrobwllllantysiliogogogoch also gives the pronunciation of the name of the town in Wales, U.K. (Nilfanion/CC BY-SA 4.0)

In public radio we do our utmost to get things right, including the pronunciation of names and places. It shows we know our stuff and conveys respect — for the people we report about and the people who make up our audiences.

But words in other languages can be difficult to say on air, and some public radio listeners bristle at hearing names enunciated with non-English accents. NPR Public Editor Elizabeth Jensen hears regularly from such listeners, especially, it seems, when the language in question is Spanish.

As a multilingual journalist who spent nearly two decades reporting from overseas, I’ve thought a lot about how to name people and places in a way that is accurate and understandable to listeners.

So let’s say you’re readying a script for broadcast and you have a person whose name stumps you, or a city whose name in English looks like a Don Martin sound effect.

What do you do? Here’s a guide:

If you are interviewing a person and you’re not fluent in their language, just ask them to say their name on tape (and skip to the phonetics section below). This is, in fact, a good practice for all interviews.

If you can’t talk to them, look for a video or audio recording in which they introduce themselves, or seek out someone who can tell you the right way to say the name. That could be a family member, close friend, co-worker, attorney, agent, publicist, embassy or government official, or anyone else who speaks the person’s language.

Failing that, search for news clips in which a native speaker talks about the person. For example, here’s a video that gives you the pronunciation of Mexican president Andrés Manuel López Obrador’s name.

If you’re on a news show, you may be working through all this moments before racing into the studio. If you can’t find an authoritative source, rewrite the script to avoid the name. DON’T GUESS!

Here are some resources:

If a well-known city has an Anglicized name, use it if English is the reporter or host’s native language. Don’t call the capital of France “pahr-EE” or say “mosk-VAH” instead of Moscow. In general, it’s better to go with English names for major cities such as Montreal, Lisbon, Cairo, Copenhagen, Mexico City, Geneva and Jerusalem, to name a few. 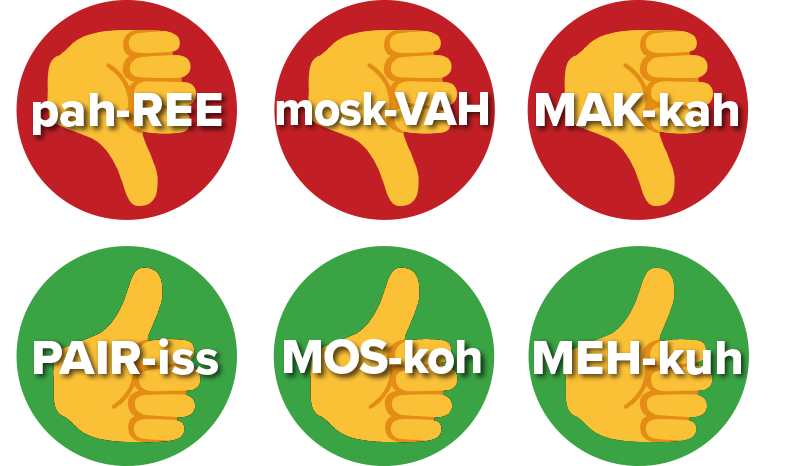 Country names should also be said in English, unless the foreign-language name is the official one, such as Côte d’Ivoire (kot dee−VWAHR), which is French for Ivory Coast, or unless the host or reporter is fluent in the language spoken there.

Opt for the local pronunciation of towns and smaller cities. An exception is if the municipality maintains an official English name, like Cologne (Köln), Germany, and Gothenburg (Göteborg), Sweden. The Hague is a much friendlier alternative to its formal name in Dutch, ’s-Gravenhage (SKHRAH-vehn-hah-khuh).

If you don’t know the local pronunciation, try the tips for the names of people.

And remember, it’s not just non-U.S. place names that can trip you up.

So you’ve found the correct pronunciation. The next step is to write it out phonetically.

Avoid the pronunciation keys found in dictionaries and use straightforward spellings that an English speaker will easily understand. Approximate sounds to their closest equivalent in English. 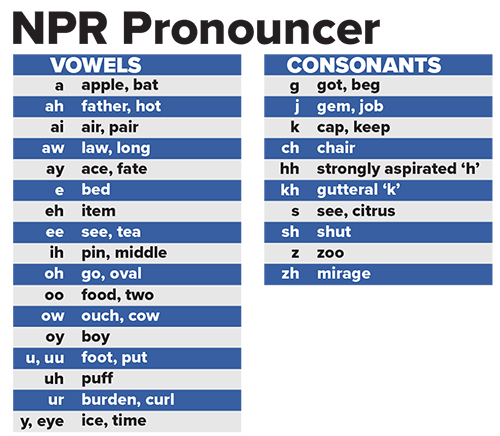 Style the phonetic spelling, or pronouncer, in any way that is easily understood by whoever is going to say the name. Denote the accented syllable with capital letters.

Write the pronouncer even if the host or reporter speaks the local language. You never know whether someone else will end up saying it.

“Practice saying the name before going into the studio,” he says, adding that memorizing it will make it easier and you won’t even need to look at the spelling, which might just confuse you.

He says that newscast producers and editors try to have foreign names in the body of the spot, so that the reporter in the field pronounces it rather than the host.

Saying it on air

How closely should you try to mimic a native speaker if you’re not one?

At NPR we routinely confront this question. In March 2019, for example, we reported on a shooting in the Dutch city of Utrecht. In Dutch, the city name contains two sounds that are alien to English — the “u” is sort of like scrunching together the letters “eeuw” and the “ch” is the sound you make when you’re clearing your throat.

There was a debate in the newsroom because Utrecht is known across the English Channel in Britain as “you-TREKT.” But the city is not a household name in the U.S., so NPR decided to get as close as we could to the original Dutch by rendering it phonetically as “OO-trekht.”

NPR’s guidelines encourage on-air staff to say names and places “as they are pronounced by the person or by residents of the place. However, they are not supposed to sound as if they’re splicing in a native speaker.”

Once you or your newsroom settles on an accepted pronunciation, strive for consistency. But if you have a guest in the studio who uses a different pronunciation, don’t correct them. It’s OK if you say “PAIR-iss” and they say “pah-REE.”

What if the reporter or host is a native speaker, or speaks as well as one?

Should they try to pronounce the name in a way that doesn’t sound too foreign? Or, if they’re reporting from a place, like Colombia, should they say “ko−LUM−bee−yah” or “ko−LOM−bee−yah”?

Once, NPR wanted all its reporters to use English pronunciations. But things have changed. Today, NPR’s staff includes people who, collectively, speak more than 30 languages.

NPR’s Lulu Garcia-Navarro often uses Spanish pronunciations as host of Weekend Edition Sunday. She recently tweeted about a voicemail she got from a listener who wasn’t happy about that.

“I’m bilingual. I’m not affecting an accent or trying to be pretentious,” she responded in a thread. “I speak the language. I think people aren’t used to hearing things pronounced correctly because we are not used to hosts from different backgrounds on the air.”

But she does try to make it easy on the uninitiated ear.

“I know sometimes it’s hard to listen to if you have a stream of words in what seems like a foreign language. So I do mix it up if that happens. Soften it or slow it down,” she added. “But I’m not going to mispronounce it.”

In response, NPR’s Martin Kaste tweeted about why he uses Anglicized place names, even though he grew up in Brazil and speaks Portuguese.

“My priority as a radio journalist is clear communication in an aural medium. Pronouncing a place name with a foreign pronunciation distracts the listener,” who is liable to miss what he is trying to communicate, Martin wrote.

Changing languages is a form of code-switching, and it’s done for a number of reasons. It’s common around the world, where more than half of all people — up to three-quarters by some estimates — speak more than one language.

Of course, it can be taken too far. But when presented in the right dosage, using non-English pronunciations can add to the credibility of the narrator as an interpreter of local culture and custom. 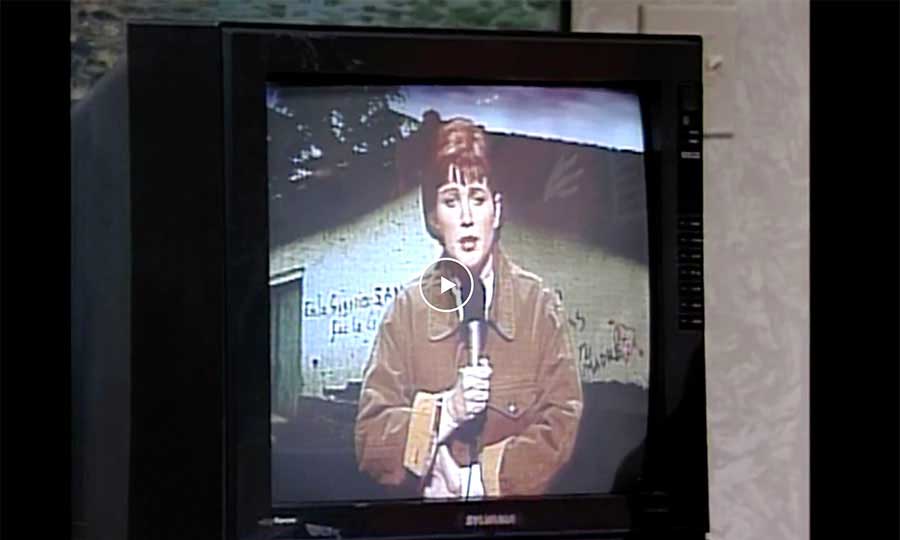 The debate about how to pronounce of words and names in other languages is not new. This Saturday Night Live parody set in a newsroom was broadcast in 1990.

When I reported from Spain in the 2000s, I tried to sound like a Spaniard when naming smaller cities like Valencia or Toledo (which had the added benefit of distinguishing it from the place in Ohio). But I did fall back on the English pronunciation for Madrid, Seville and Barcelona.

And like Lulu, I also sometimes softened it or slowed down, especially when switching between English and Spanish. Different languages use different parts of the mouth, and a slight pause benefits both the listener and the speaker.

Saying your own name

Listeners pay attention to how public radio reporters say their own names, and here again there appears to be a double standard. Some listeners question the authenticity of on-air personalities who say their names with a Spanish accent, while Sylvia Poggioli’s pronunciation of hers with an Italian accent engenders warm feelings.

Mandalit del Barco, Maria Hinojosa, Adrian Florido and Rund Abdelfatah are just some of the NPR personalities who use non-English pronunciations.

For me — having grown up in the U.S. as a child of Argentinian immigrants of Eastern European stock who gave me a first name that sings in French — English seems natural.

So is there a rule to be followed when saying your own name on air?

Yes. Say it any way you want.