Tips from the Twitterverse on surviving two-ways 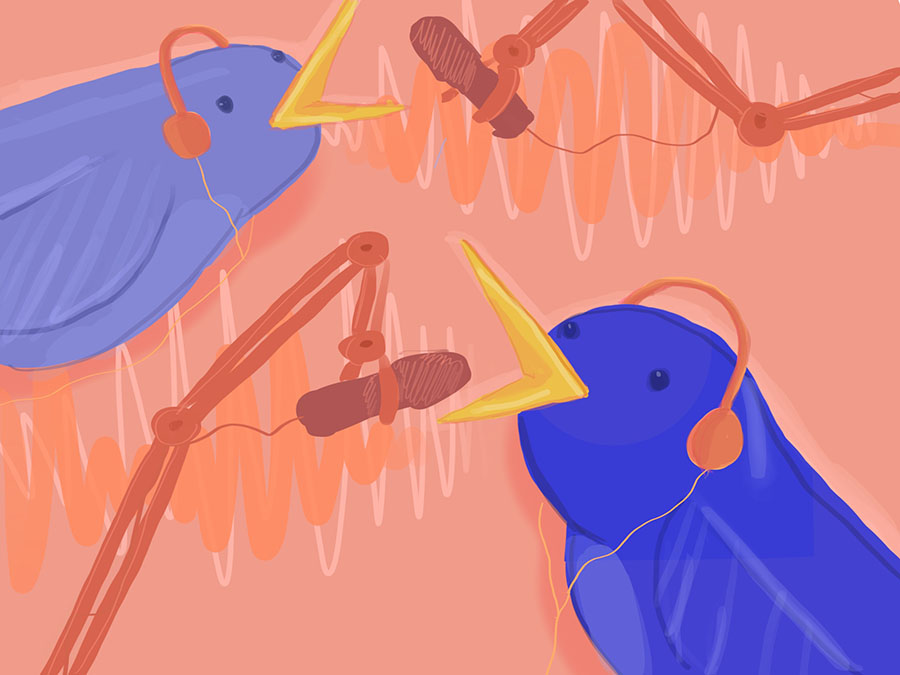 It can be terrifying.

You’re live on the air before an audience of thousands, possibly millions, and you have to talk about a fast-moving news story. You need to sound authoritative but casual, informative yet informal. On top of that, you may have had little or no sleep beforehand.

The reporter two-way — an on-air conversation with a host — is not easy to do. But when executed well, it’s a great way to cover breaking news or developing stories that might quickly render a produced piece obsolete.

Alyssa Edes, a producer at Chicago Public Media who until April worked at NPR’s All Things Considered, was recently planning a training session for staff at member station WBEZ. So she asked her former colleagues at NPR for advice.

A bunch of them responded, including correspondents Sarah McCammon, Elise Hu and Scott Detrow, and political editor Domenico Montanaro.

I’ll get to their tips in a minute. But first, a word about the format.

Though long a feature of public radio, two-ways are sometimes criticized because they lack the sound-rich experience of a reported piece.

While produced pieces can paint a picture with good tape and scenes, having the host and reporter, or the host and a guest, engaged in a relaxed yet structured conversation can be a more efficient way of delivering news.

“The thing about the two-way is that it takes less time to get ready, and you’re able to provide quick context and analysis,” Alyssa told me. “We need reporters who are comfortable doing both. It’s not either/or.”

NPR does many two-ways every day, starting with the three that make up the podcast Up First. On a recent weekday, seven of the 15 segments on Morning Edition were two-ways, as were eight of the 18 on All Things Considered and all 11 segments on Here & Now.

That includes both reporter two-ways and two-ways with a guest (newsmaker, cultural figure, eyewitness, etc.).

While a conversation with an outside guest is not scripted with their involvement, with a reporter it’s essentially choreographed. It loosely follows a script or framework with questions that have been discussed beforehand. And that’s the format we’re talking about here.

So how do you, as a reporter, nail a two-way? The thread generated by Alyssa’s tweet could be a how-to manual.

Sarah and Scott brought up the cardinal rule — don’t read your answers.

Know what you’re going to say but don’t over-rehearse. I’d rather hear someone talking like a real (imperfect) person than reading in monotone. But prepare! Have bullet points, know what you want to get across, make sure to land each answer on an important or interesting idea.

Always a tricky line between preparing but not being too scripted. The best ones I am in tend to go a little off script but keep the same logical flow we had mapped out from q to q. If possible, over-outline the convo beforehand, but set those notes to the side when live.

“You’ve got to be open to improvisation,” she said. “If host throws you a question you’re not expecting, just go with it. And be yourself, don’t try to sound like NPR or someone else you heard on the radio.”

Don’t forget to breathe, and think about your facial expression, Sarah said. That matters in radio.

And also smile even though no one can see you. It will help you relax. Think of it as talking to a bunch of smart friends who want to know more about something you know a lot about. (For serious subjects, maybe don’t smile but do take deep, slow breaths before you go on air.)

Science reporter Michaeleen Doucleff said she imagines talking to someone she knows.

To keep the answers short and sweet, I’ve learned to just close my mouth at the end of a sentence. I also pretend like I’m explaining it to my husband over dinner or my mom on the phone 😉

Elise Hu, who recently became NPR’s first “Future Correspondent,” suggests following a basic structure and having an interesting detail in your pocket.

I try to keep it really simple — like, what happened, why it matters, what’s next? Or if it’s totally unscripted then I just keep in my head two points to hammer home. Also I like to have one random or surprising/funny thing, like dressage horses, that sticks w ppl

One of the advantages of a two-way is the immediacy it conveys when it’s done live on location, which is NPR national desk correspondent Kirk Siegler’s preferred way to do it.

Whenever possible, even if it seems like a stretch, don’t be in a studio. Be at the scene, or at least at the scene of something relevant to the conversation. That gives the audience a sense of place and being taken somewhere and can also lead to more spontaneity/liveliness

If you are going to do it from outside a studio, carry a second cell phone in case something goes awry with your Comrex or your primary phone.

Alyssa put Domenico’s tweets on one of her slides: 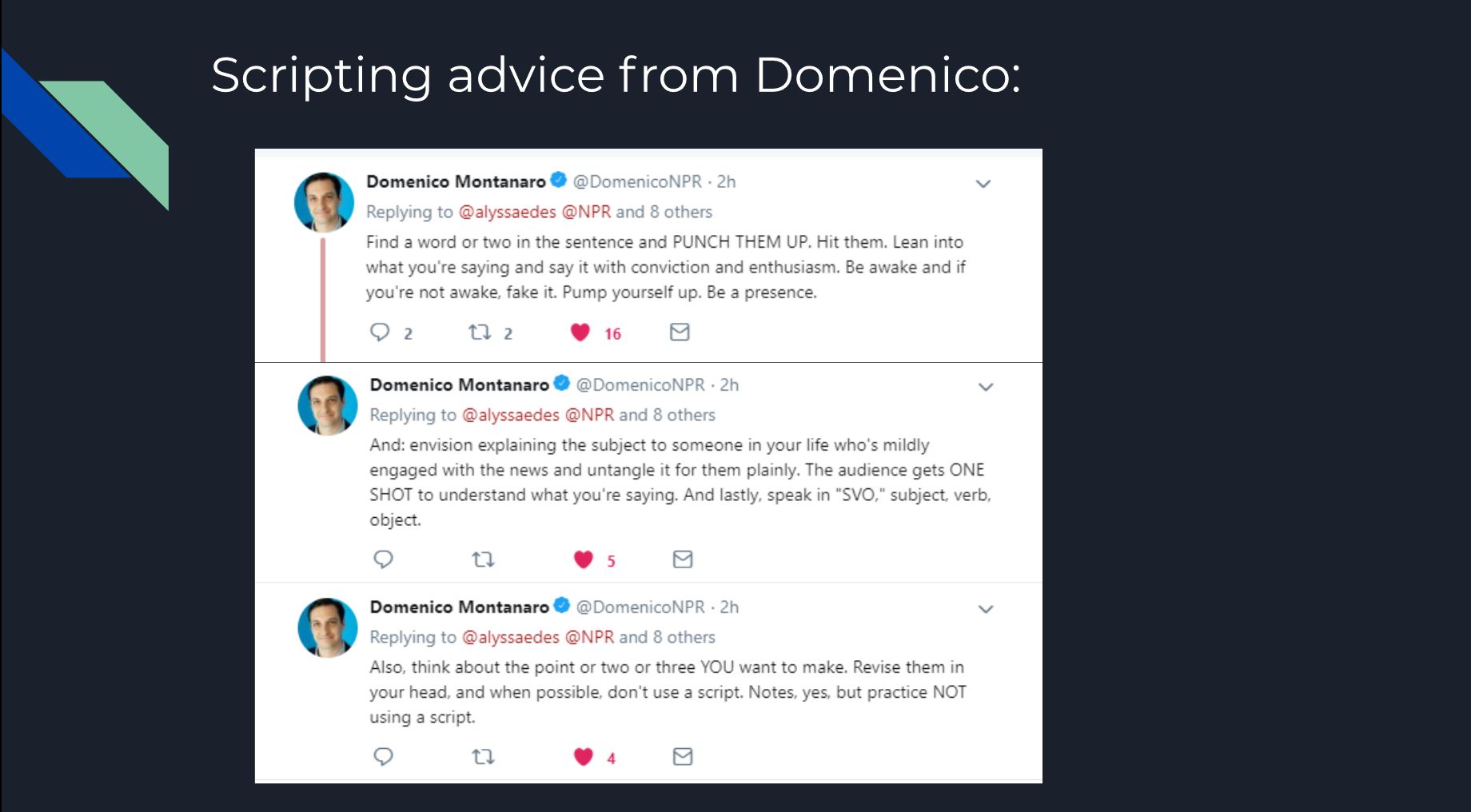 Seattle-based correspondent Martin Kaste had a range of advice, from not trying to put as much information in the two-way as you would in a pitch, to keeping the first answer short.

Hmmm… I’d say don’t do the 2way if there’s time for a produced package, which I still prefer as a listener & reporter. If there isn’t time, or you’re outside standing in front of a giant flaming pile of news, that usually takes care of making things conversational and engaging.

OK, say you HAVE to do a two-way. For me, the best is usually a free-wheeling conversation with a curious host on tape, edited down later. If it’s live, give the host 2 or 3 points they MUST ask you; write script for yourself for the answers… then put away script & wing it.

Finally, don’t try to convey the same amt of info that you would in a produced package. You can’t. This is a conversation, which by nature is about half as efficient as a scripted pkg when it comes to facts-per-minute. If you try to pack too much in, it’ll sound fake and rushed.

final, anti-climactic thought: Have a strong opening sentence ready to go. If you start strong, you feel and sound confident, and the rest flows more easily. You don’t want to start with a fumble, and waste time trying to regain momentum.

And remember, you can do it!

Here are the slides of Alyssa’s session, which she developed with WBEZ producer Max Greene and Shawn Allee, director of training, professional development and operations at the station.

You can also read what we’ve written before about two-ways at NPR Training.