Reporting from home: how NPR correspondents do it

Like other journalists around the country, many public radio reporters, producers and editors are working from home these days, turning kitchens and living rooms into impromptu news bureaus and closets and blankets into recording studios.

It’s not a new way of bringing our listeners the news, though. NPR’s international correspondents have been working from home for almost as long as the network has been around.

In 2002, I became a radio reporter and spent the next eight years recording NPR spots and show pieces from my home in Spain. Having come from a fully staffed wire service news bureau, I soon found that working from home was a whole different ballgame.

There were plusses: no time wasted on commuting and I could raid the fridge as often as I liked. In the middle of the day, I’d take my dogs mountain biking through the Mediterranean oak forest a few blocks from our house.

But I also had to learn to motivate myself and solve my own technical problems. And there was the complication — also an occasional joy — of reporting with small children.

With COVID-19 spreading, NPR is requiring all staff who can work from home to do so. Sitting in my sunroom now reminds me of my time overseas, and how I used to record and file stories remotely. So I asked some of NPR’s international correspondents on the front lines of coronavirus coverage how they do it, and how they are coping.

“The worst thing about this ‘story’ is that reporters are living the same situation as everyone else,” says Sylvia Poggioli, who has been an NPR international correspondent since 1982.

She says the restrictions in Italy are unlike anything since World War II.

“I’m not just reporting, but I’m also experiencing the isolation, the anxiety, the confusion. I don’t have distance, or at least not much distance, from this hard-to-define unprecedented situation with a very invisible enemy.” 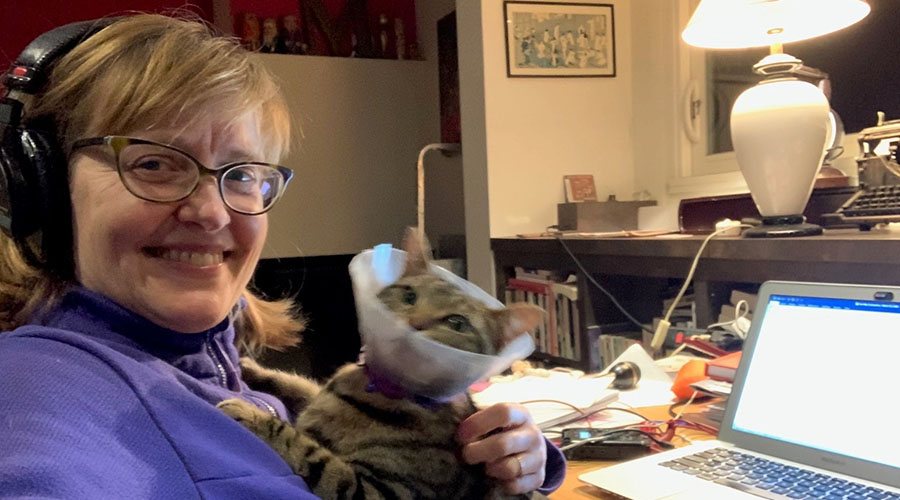 NPR Paris correspondent Eleanor Beardsley reports on coronavirus developments in France from her home office. Her cat, Tiger, wears a post-surgical cone and is feeling confined too.

Back when things were normal, Eleanor Beardsley, NPR’s Paris correspondent since 2004, would get out from time to time to work in a cafe or meet a friend for lunch. “But we can no longer do that.”

Here’s what she recommends doing now:

Anthony Kuhn has been an NPR international correspondent since 2004, reporting from London, Beijing and his current post, Seoul. He also puts a premium on a work-friendly environment.

For more tips on maintaining your sanity, see this Poynter article: “How journalists can fight stress from covering the coronavirus.” 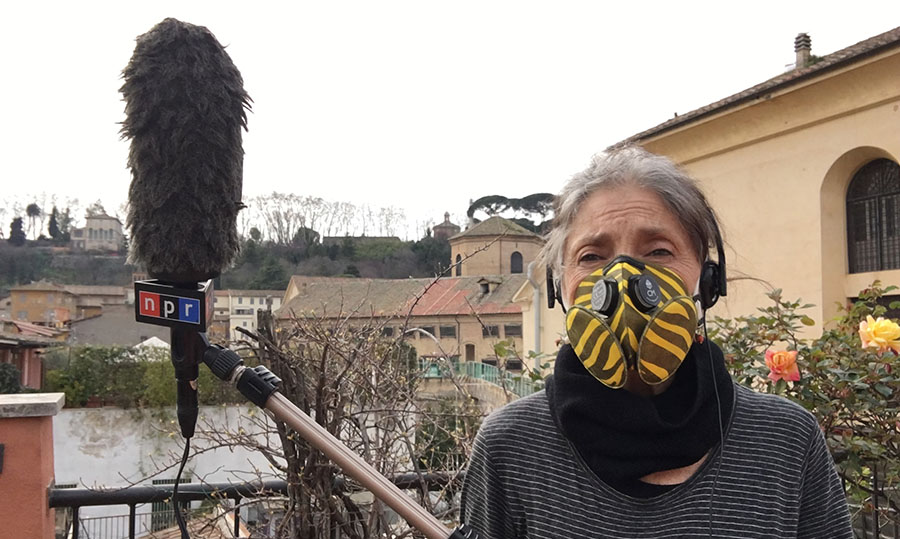 NPR’s Rome-based correspondent Sylvia Poggioli wears a mask and uses a fishpole to maintain social distance when she goes out to do interviews in Italy, which is on coronavirus lockdown.

In Italy, Sylvia is still doing interviews on the street, wearing a face mask a friend brought from Poland because in Italy stores were all out, and using a fishpole (a handheld microphone boom) to maintain social distance.

Most of her interviews are over the phone, and she says even that has gotten harder.

“All offices are closed, so if you don’t have a person’s cellphone, you have to find their emails and Italians are not so great at providing contact info like that on the Internet. So, it’s very time-consuming.”

When they do get someone on the line, NPR correspondents make every effort to obtain high-quality audio.

Here’s how Eleanor suggests doing it:

“Ask people you interview on the phone if they can record themselves by voice memo and send it to you by email,” she says. “You can talk on a different line and have a good-quality recording of them. It sounds like you met them.”

In essence, it’s a version of the traditional tape-sync, but you are both interviewer and producer. The interviewee needs to have two phones, or communicate with you via a computer with Skype or other voice software while recording on their cellphone.

Be mindful of the acoustic environment at their end.

“Phones are susceptible to plosives, so get interviewees to put phones a couple of inches from mouths, and off to a 45-degree angle,” Anthony says.

If all that fails, he recommends connecting your phone to your recorder and doing the interview over WhatsApp, FaceTime or another chat app.

Filing remotely used to mean recording your tracks and then uploading your audio via the phone or FTP. It was a cumbersome process, not well-suited for breaking or fast-moving news stories, especially back when a spot-sized audio file took 10 to 20 minutes to upload.

Now, Eleanor says she never files spots using her Marantz. Instead she records them via the Report-IT app on her iPhone and sends it directly to Washington.

Another option is Ringr, which is used by many podcasters. 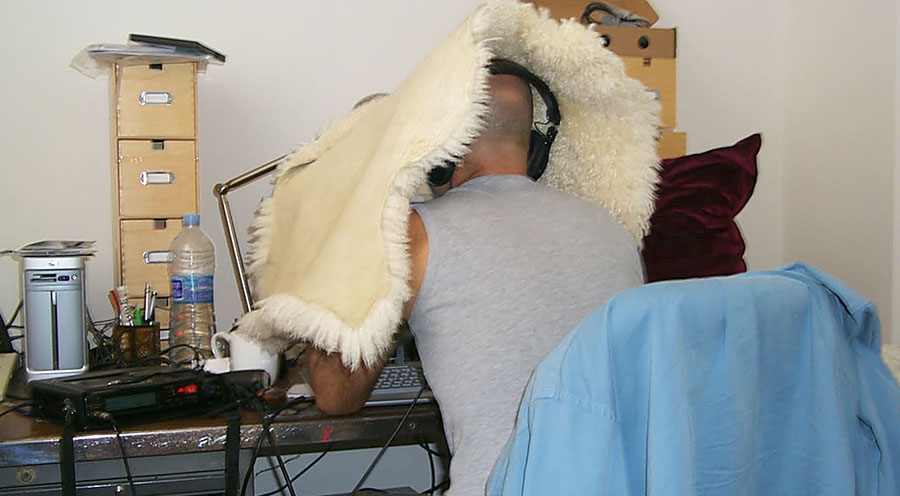 NPR Training’s Jerome Socolovsky used to work out of his home office when he reported for NPR from Spain. In this picture taken in November 2007, he used a sheepskin for better acoustics as he recorded his tracks.

Once your script is done and you are ready to track, it’s time to think about acoustics.

WAMU’s Daniella Cheslow wanted to build an at-home radio booth, so she asked for suggestions in a Twitter callout to NPR correspondents. Some of the answers she got from Diaa Hadid, Lauren Frayer and Daniel Estrin: Drape a blanket over your head, or make a box lined with foam or egg crates.

My solution in Spain was to duck under a sheepskin, purchased at Ikea.

If you want a more sophisticated setup and have $800 to spare, you can buy a ready-made home studio from Isovox. But if you can afford that, you’re probably not a public radio journalist.