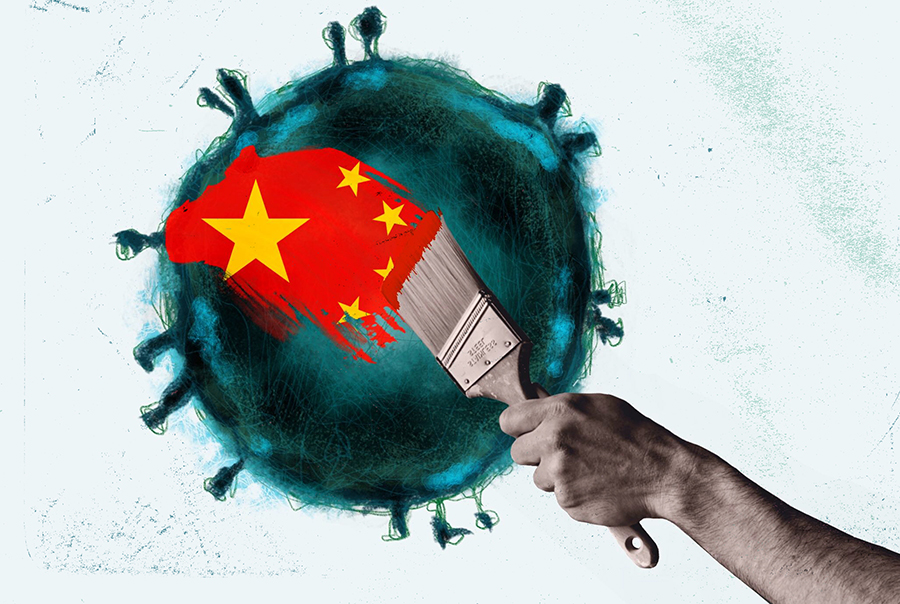 President Trump and his political allies have referred to the novel coronavirus as the “Chinese virus.” They defended the term by recalling the Spanish flu, despite no proof the early 20th-century pandemic started in Spain.

It may seem harmless to use geography as a modifier, but often it’s not. As NPR’s Code Switch reported, harassment of Asian Americans during this outbreak has been intense. And according to the World Health Organization, geographic names for diseases can “provoke a backlash against members of particular religious or ethnic communities.”

In the past, diseases often got official names associated with geography, like Middle East respiratory syndrome and Rift Valley fever, named for a disease first identified in Kenya.

The WHO now discourages this naming convention, urging that “whoever first reports on a newly identified human disease uses an appropriate name that is scientifically sound and socially acceptable.”

In February, the Asian American Journalists Association specifically called on news organizations to avoid using any term that “uses geographic locations or refers to a population to describe the virus.”

In fact, geography, ethnicity and religion frequently appear in the media as modifiers for all kinds of nouns.

But when they can serve as an incitement to racism or xenophobia, we must avoid them.

How do we know? Here are five questions to ask yourself.

What is the nature of the noun you want to modify?

Does the noun you are modifying in any way evoke fear or disapproval? Are you using it to describe crime, disease, chaos or other undesirable phenomena?

If so, consider whether a geographical or ethnic modifier is necessary or appropriate.

Is it a generalization?

One of the defenses of shorthand descriptions is that they are concise. But that is only true when they are also precise. When shorthand becomes a broad brush, it tars the innocent.

Consider the recent violence during President Trump’s visit to India in February, following protests over the exclusion of Muslims from an amnesty for undocumented immigrants.

Many news outlets reported that “Hindu mobs” attacked Muslims. In doing so, the reports rendered invisible the many people who, as Kenan Malik argued in The Guardian, oppose Prime Minister Narendra Modi’s efforts to dismantle India’s secular foundation.

Nationality defines, but it can also mislead. Many Basques and Catalans bristle at being called Spanish, and the Scottish are feeling decreasingly British in a time of Brexit.

NPR correspondent Hansi Lo Wang, who is covering the 2020 census, says that since “Chinese” is often used as shorthand for the Han ethnic majority in China, using it to describe a person living there “could obscure the country’s ethnic diversity.”

That’s not to say your Tunisian cardiologist is better described as a “cardiologist from Tunisia,” or that you can’t write about a Papuan soccer player, an Angolan pilot or an Ecuadorian nun. But you should ask yourself …

Racism against Asian Americans has been a problem since at least the mid-19th century. And as the Code Switch episode on the novel coronavirus noted, “fear of disease and xenophobia have often gone hand in hand.”

At the same time, there’s clear intent from the president and other politicians to label COVID-19 as belonging to people other than Americans, even though the virus clearly knows no borders.

But the name is already out there. And early on in the crisis, mainstream news outlets including NPR also used similar terms, including Wuhan coronavirus, to describe the illness first reported in the city that is the capital of China’s Hubei province.

Is it a stereotype?

Even with the best of intentions, writers sometimes unwittingly evoke stereotypes.

“When Muslims are involved in violent acts, there’s often an assumption that their actions are religiously motivated,” Nieman Reports observed regarding press coverage in 2016, after the shooting at a gay nightclub in Orlando. The perpetrator pledged allegiance to ISIS, but the investigation suggested the mass shooting was “closer to a hate crime committed by an unstable man” conflicted about his own sexuality.

When talking about Islam and political violence, Judaism and money, or immigrants and lawlessness or contagion, we need be mindful of stereotypes that have been used to slander particular groups.

If the modifier is not absolutely essential to the story, it most likely doesn’t belong.

In the NPR podcast White Lies, a merchant in Selma, Ala., is described as being both a segregationist propagandist and the son of a Jewish immigrant. Was his faith background relevant or necessary to understanding the crime the podcast investigated? It may have been, if there had been an exploration of the vulnerability that Jews in the South felt during the civil rights era. But religious identity was superfluous to the narrative, and was not given for gentile segregationists.

One way of knowing if a modifier is relevant or necessary is to do this thought experiment: Take your geographic or religious modifier and your noun and try substituting the modifier with one that is associated with an alternative grouping of people, ideally one with power and influence.

Would you talk about an “American virus” if COVID-19 had originated here and spread overseas? Would you describe Warren Buffett as a “Presbyterian-born investor,” or Dylann Roof as a “Lutheran terrorist”?

During the 17th and 18th centuries, when England and Holland fought repeated wars over trade and colonial influence, many terms entered the English language that smeared people from the Netherlands: Dutch courage (alcohol-fueled daring), Dutch uncle (someone who admonishes in a stern way), double Dutch (unintelligible or meaningless talk) and going Dutch (which suggests they are too stingy to pick up the tab).

These days, many people laugh them off, but the terms are a reminder that denigrating geographic modifiers often serve political ends. And that should make any journalist wary of them.