During the pandemic, cover those we've left out 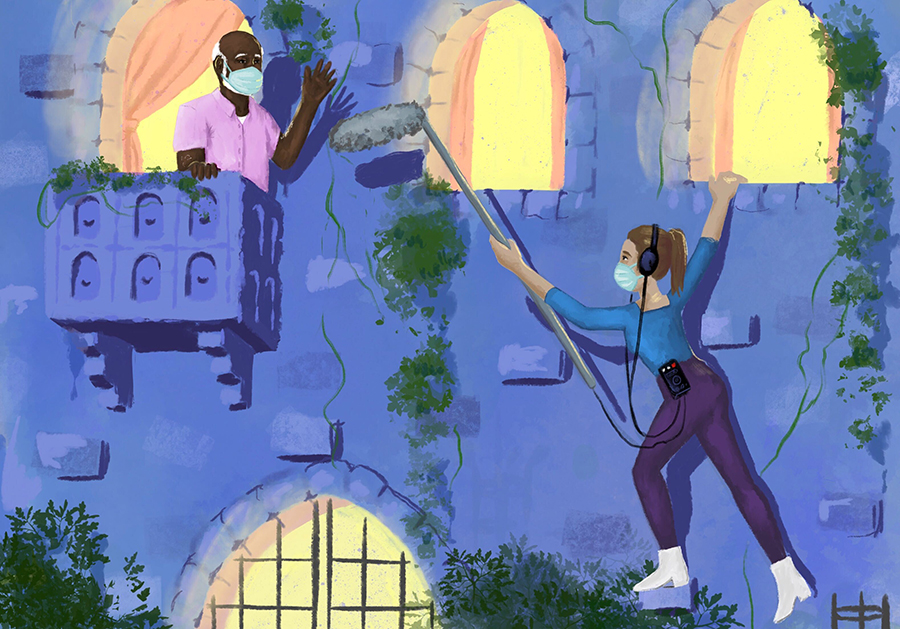 In times of crisis, journalists have the responsibility — even more so than usual — to seek out people who are often passed over by the media, even as stay-at-home orders make it harder to reach them. NPR Training’s Jerome Socolovsky writes that the profession’s moral duty is to give the mic to the voiceless. NPR’s Chief Diversity Officer, Keith Woods, urges journalists to find sources and stories that could impact the arc of the pandemic itself.

Jump to Keith’s No hindsight needed: Think of diversity now, when it matters most

Covering the afflicted: our moral duty

“The job of the newspaper is to comfort the afflicted and afflict the comfortable.”

OK, so that was actually said by a fictional character in a Chicago Evening Post column more than a century ago. And even that’s not entirely true, because the original quote has since been butchered.

Still, the saying expresses a truth. It’s one of journalism’s most important missions — giving voice to the voiceless.

It’s a moral charge. We value an individual’s well-being as much as — if not more than — the social good, which is why we are supposed to tell the stories of ordinary people.

The coronavirus crisis seems to be shifting foundations everywhere: Citizens are accepting the curtailment of civil liberties, fiscal conservatives barely flinch in the face of a ginormous government stimulus, hospitals function as though they are on battlefields.

Yet journalists must remain steadfast in our mission.

How do we do that?

Get to the “afflicted”

Stories about how to work from home, what to do with your kids, and what TV shows and movies to stream have their place in a time like this.

But they don’t normally give voice to the voiceless.

There’s no denying it’s hard now. You can’t just go out on the street to find everyday folks, or travel the distance necessary to meet marginalized people where they live, when you’re under orders to stay home.

But in a crisis likened to war, media should report on it as such.

No reporter should ever be pressured to cover an armed conflict (like I once was). But many journalists want to be where the big story is, and some are willing to take the risk. The result can be powerful. Just listen to WNYC reporter Gwynne Hogan’s piece from a Brooklyn hospital, in which you can feel the drama and urgency of being on the front lines of this crisis.

Anyone who volunteers to report in the field — for a story their editors believe warrants the risk — should be supported with every safety precaution possible — face masks, fishpoles and shotgun mics, and reminded to disinfect their equipment. And they should be honored with the kinds of awards given to war correspondents.

The rest of us need to be super creative in getting to people virtually, thinking about audio quality at the other end of the line, and creating scenes with action when we’re not there ourselves or lack the ability to record ambient sound. A great example of such a scene is Sarah Gonzalez and Amanda Aronczyk’s description of a vaccine being made using “hardworking government chickens” at a top-secret facility in this Planet Money episode.

“KQED in San Francisco reported that there are ‘heart-breaking calls from seniors, alone, hungry, some disabled and without the financial or community support needed to get through a lockdown with no end in sight.’ So let’s have more reporting on what those seniors are feeling.”

Who are the “afflicted?”

We are doing plenty on the broadest category — the working-from-home stories, the challenges of social distancing, the toilet paper shortages.

As the economic crisis deepens though, we’ll need to tell the whole story by doing much more reporting on the second category: poor people, farm workers, domestic workers, restaurant staff and others facing job losses and industry-wide collapse. We should also probe the anxieties, fears and worries of a whole generation growing up in crisis.

But with respect to the first category — the most medically vulnerable — there is a dire need for stories about what it’s like to be old right now.

According to the CDC, 80 percent of COVID-19-related deaths in the U.S. are among people over the age of 65.

Public radio stations have had stories on the vulnerability of nursing homes, the designated store hours and other efforts to help, although the focus is often still on the young.

And KQED in San Francisco reported that there are “heart-breaking calls from seniors, alone, hungry, some disabled and without the financial or community support needed to get through a lockdown with no end in sight.”

So let’s have more reporting on what those seniors are feeling, like Vermont Public Radio reporter Nina Keck’s profile of an elderly couple separated by COVID-19

It won’t be easy because older people are most likely to be disconnected from the digital world. And while nursing homes and senior living facilities can provide the most direct path to older Americans, many of those institutions, out of justifiable concern for their residents’ safety, are not allowing visitors.

But there are plenty of ways of reaching the people inside. Many are in touch virtually with their children and grandchildren. Or they talk through glass doors.

Our youth-obsessed society makes the elderly invisible — with the exception of those running for president. To the multitudes feeling frightened and lonely these days, let’s offer the thing journalists can provide — a microphone.

No hindsight needed: Think of diversity now, when it matters most

In the aftermath of nearly every major disaster — and we have no modern corollary for the nightmare we’re enduring — we see stories about how journalists failed to cover some communities or missed key angles or stories about the people most often undercovered by the media.

That almost always means that people of color, poor people of all races and ethnicities, and people more geographically isolated are overlooked or rendered societal clichés, ever the victims; rarely the heroes.

For journalists who weren’t doing great on source diversity to begin with — and that’s most of us — the COVID-19 pandemic, with its lockdowns and social distancing, has made including people in their fullness harder than ever at the precise moment when the stakes of inclusion could be life and death.

But this story doesn’t have to end with professional self-flagellation or more cautionary tales. We can do something about sourcing now, when it matters most. Here are some things to think about:

“It’s through those voices — heard not once, but over multiple stories and interviews — that communities and the nation best come to understand the magnitude of problems in times like these, making the role of powerful storytelling potentially life-changing.”

Get to the ground

Get beyond the experts. Include advocates, but don’t stop there. Too many journalists talk about the people being affected, but not to them.

Our own research at NPR has shown through the years that more than two-thirds of our sources are experts — politicians, business leaders, professors, other journalists — and that those sources have been overwhelmingly white, coastal and male. It’s not until we talk to the people affected by the stories, as in this piece from KJZZ’s Laurel Morales, that the source demographics start looking more like the country we cover.

It’s through those voices — heard not once, but over multiple stories and interviews — that communities and the nation best come to understand the magnitude of problems in times like these, making the role of powerful storytelling potentially life-changing.

Look for inequity AND ordinariness

It’s striking how powerful the association is between “diversity” and “pathology” for many journalists. There are good reasons for reporters to look into the ways COVID-19 will unfairly ravage communities of color, poor white Americans and anyone else failed by the country’s health care inequities. History advises us to watch for the scammers who prey upon the elderly, the uneducated, the misinformed; to be vigilant in lifting up the voices of the people society (and other journalists) ignore. It’s crucial that we tell those stories now; hear those voices now; shine that powerful light today.

It’s crucial that we push back against reflexive stereotyping that locks people in prisons of selective relevance. Consistently, we’ve found in our research at NPR that people of color show up most substantially in stories about race and ethnicity. When those stories were removed from the sample, white sources on NPR’s main shows rose to almost 85 percent.

That means people of color are often missing from the stories of everyday life: the pieces on parents wrestling with how to teach and entertain their children; the interviews where chefs or barbers help us improvise in these days of forced DIY. We need to include people of color in stories that focus on ordinary things, as in this recent conversation about staying fit while sheltering in place.

Look now for those sources and coverage that tell the full story — the joy and the pain — of how people are living during this crisis.

Rise above the obstacles, new and old

The profound restrictions now placed on our mobility by the pandemic exacerbate sourcing deficits created by bad habits, biases and beat structures. There are a few ways to close your sourcing gaps:

Be intentional. If diversity is your goal, act that way. When my colleague Jerome Socolovsky started looking for a barber for a piece about ethics in the age of the coronavirus, he made some decisions: He would search in the Midwest, away from the coasts. He wanted a person of color, so he chose Detroit, a city with a substantial black population. When he did a search on Yelp for hair salons, the rankings site delivered a list of predominantly high-end, downtown salons that had mainly white employees and catered mostly to white customers. So he shifted the map search area and checked out the customer-uploaded photos until he found shops whose staff and clientele were people of color.

Assess and escape the limits of your network. Even when we’re not forced to report from our living rooms, journalists tend to tap the people closest to them for sources. We do call-outs to our Facebook, Twitter or Instagram followers; we ask our audiences for help. We’re recycling the same sources, changing little. My NPR colleagues on the podcast Short Wave ask every source for the names of people whose opinions they respect, ever expanding the size and diversity of the source pool.

Tap available databases. Jean Accius is an expert on aging with a focus on retirement communities. As the coronavirus decimates nursing homes, his would be a relevant voice. He’s among hundreds of potential sources in NPR’s Source of the Week database. Check out the sources in places like the Database of Diverse Databases, then build your own bank of experts.

The sobering truth is that the story of the coronavirus will be with us for a while to come. The stories we tell and the voices we include may well alter the arc of the story. Get it right while it matters most so we can look back on this moment in journalism and see coverage that looks and sounds like America.