A field guide to reporting on COVID-19 (bring plastic wrap) 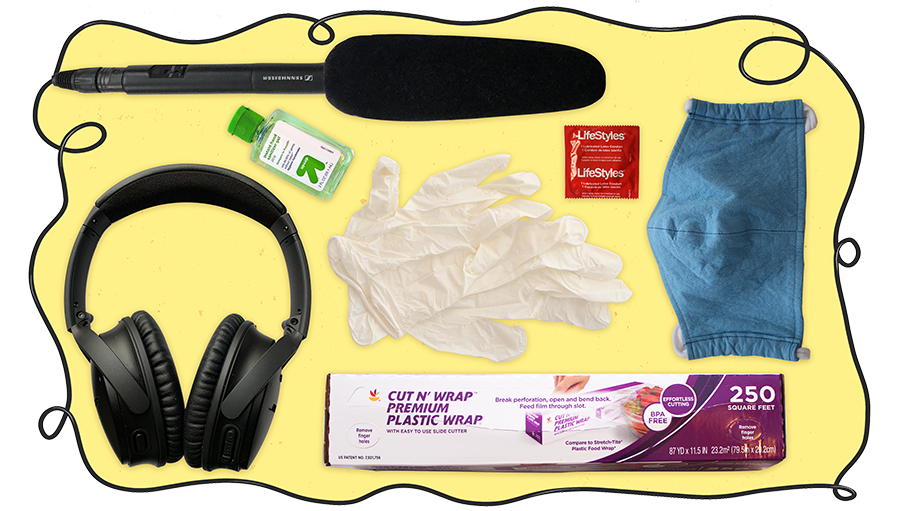 Some tools of the COVID-reporting trade. Yes, that’s a condom. (Halisia Hubbard/NPR)

A journalist’s first instinct during a crisis is often to rush to the scene of a news event and talk to the people affected. In this global pandemic, many reporters have followed that instinct, creating pieces that marshal the storytelling power of radio by taking listeners to the front lines of fighting the disease.

From WNYC in New York, Gwynne Hogan’s March 30 report, which featured field recordings from a Brooklyn hospital ICU, brought the experiences of health care workers and patients to the airwaves by sampling the sounds of medical equipment, the chatter of health care workers and a moment of euphoria when a COVID-19 patient recovered enough to start breathing on her own.

Newsrooms realize that the risks of covering the pandemic in person are high. At both NPR and member stations, editors are telling reporters to stay out of the field whenever possible. But public radio reporters and producers continue to risk field assignments when they feel there simply is no substitute, armed with protective gear and obsessive hand-washing.

WNYC has given its reporters go-bags containing gloves, masks, hand sanitizer and a medical gown. Reporters need to get field assignments approved by multiple editors. Interim news director Sean Bowditch said in a note to staff in March that all field assignments must be approved by himself and Jen Chung, the executive editor of Gothamist. The note emphasized that staff members could come forward at any time to express discomfort with an assignment and that would always be respected.

WBUR’s guide has several criteria for reporters and editors to discuss before a field assignment is approved. The Boston station’s list:

“I feel very strongly that it’s our job to cover this,” Hogan said. “I’m young, I’m healthy, I live alone. I can take risks that not everyone in this newsroom can. It shouldn’t just be the people in nursing — it’s a war for them. I cover this city. There’s no reason it shouldn’t be a war for me, too.”

Reporter Eli Newman of Detroit’s WDET uses the phone and apps like Zoom to conduct interviews when he can. But, he says, it’s not always enough, and for many of his stories there’s simply no substitute for gathering information and talking to sources in person.

“I live in a city with significant numbers of people who don’t have Internet access,” Newman said. “They don’t regularly make water or rent payments, sometimes deciding between paying their grocery or utility bills. So talking to these people on Google Hangouts is not an option. When we do only rely on that stuff, it narrows our sources, and for me that’s a non-starter.”

For reporters and producers willing to risk a field assignment, here are guidelines adapted from NPR, WBUR and WNYC’s criteria:

Here are additional insights from reporters interviewed for this story about the challenges they face in covering the COVID-19 story.

I covered all of my gear in Saran wrap. I have a shotgun mic, which I used a condom to cover. I wore gloves, a face mask, and brought a whole bunch of alcohol wipes with me. … Inside the facility I was given a better-quality face mask … and in the emergency room I got a face shield as well as a face mask. I didn’t wear a hazmat suit or anything like that, but as soon as I got home I washed all my clothes, took a shower, put my backpack in the wash and wiped all my gear down with alcohol wipes and disinfectant spray.

I was overwhelmed while it was happening, but I had my recorder going the whole time. There were a few things I knew I wanted to record, like the sounds of machines beeping, but otherwise I chose all of the ambient audio after I got home. Usually I’d stay longer on an assignment like this, but this time I didn’t. The interview was 30 minutes, in a conference room, and then the tour was probably 20 minutes or half an hour.

Just being [at the hospital] was so much better. It’s like pulling teeth trying to get people to talk on the record for hospitals. It’s so irreplaceable being physically present, especially for radio.

The mask really changes the sound quality of someone’s voice. But I don’t feel like the empathetic barrier is too strong. 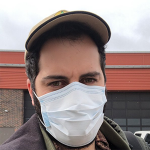 Over the course of reporting out this transit story, I was interviewing bus drivers and riders, and a shotgun mic can do wonders, especially when you have a boom.

Initially in my reporting in the field, wearing a mask wasn’t widely adopted yet and I socially distanced, but didn’t wear the mask right away. Especially in Detroit, a lot of people are coming from different circumstances, and the idea of me wearing a mask around people who aren’t wearing masks could create distance. Now, however, wearing masks has been widely adopted in the city and I always go out wearing one.

I have a ‘furry cat’ cover on my shotgun mic that I wipe down with disinfectant wipes, along with all of the rest of my gear, and I make sure to keep all of that in my car rather than bringing it in my house. I’m also washing hands, being crazy diligent.

Some people want their stories told and you have to create that opportunity. You have to feel out situations — if someone sees a big microphone on a boom, it’s all fuzzy, sometimes you don’t need that. Sometimes if I make an introduction, then grab the equipment afterwards I have better success.

Often when you’re covering ordinary people there’s a communication gap, or a general mistrust of the media. I think the important thing is … to explain how journalism works to people. So it’s telling people, ‘Me approaching you and asking you a question isn’t necessarily going to make it into the piece.’ You have to explain what being ‘on record’ means. That’s where the mistrust festers — a lack of understanding. 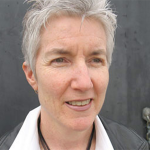 Martha Bebinger, WBUR: Tent Medicine To Treat Those With The Coronavirus In Boston’s Homeless Community

I don’t actually take a [recording] deck out into the field anymore. Everybody has phones, so I ask them to record audio using voice memos. We can stand six feet apart and so I never have to share equipment. I don’t touch anything they’ve touched, and they email me the file afterwards.

I could’ve done this story from home, but if you’re not in the field and seeing what the person you’re interviewing is seeing it’s hard to prompt them to tell you about what they can see. It isn’t second nature for them to tell you that all of the fancy medical equipment in a tent is hanging from bungee cords.

It’s all simple hygiene stuff: keeping hand sanitizer in the car, making an extra effort not to touch anything I don’t have to. I won’t put stuff down on surfaces or lean against them.

I do reporting on homeless folks and people living on the street during the addiction crisis — it’s really impossible for them to practice social distancing. That is a community of people that is already very cautious about speaking to reporters. Sometimes they’re just generally distrustful of anyone they don’t know, and developing trust from a distance is harder than if you’re touching someone on the shoulder, or [you] pick up a pen they dropped. So it’s a little trickier to establish rapport with people this way. I would say it takes a good 50 percent of extra effort. More people say no to talking at random.

In the hospital … it’s almost easier to talk to people on the phone about some difficult things. If I’m talking to an anesthesiologist about how he has to go in to intubate a patient, they will be inches away from the person’s face. I can’t be in that moment with them — it’s not safe. So some things are easier over the phone because it relieves one layer of stress for the person I’m talking to.

I spend more time than usual taking the temperature of a person I’m talking to, and I am more relaxed than I might normally be about saying, ‘Take a minute; call me back later.’ Usually if I need a story I try to finish interviews, but I’m probably more accommodating now to people who are too wiped out or emotionally raw to keep talking.

I think it’s more important than ever to set aside times for breaks and have routines for whatever helps you calm down — working in the yard, listening to an audiobook.