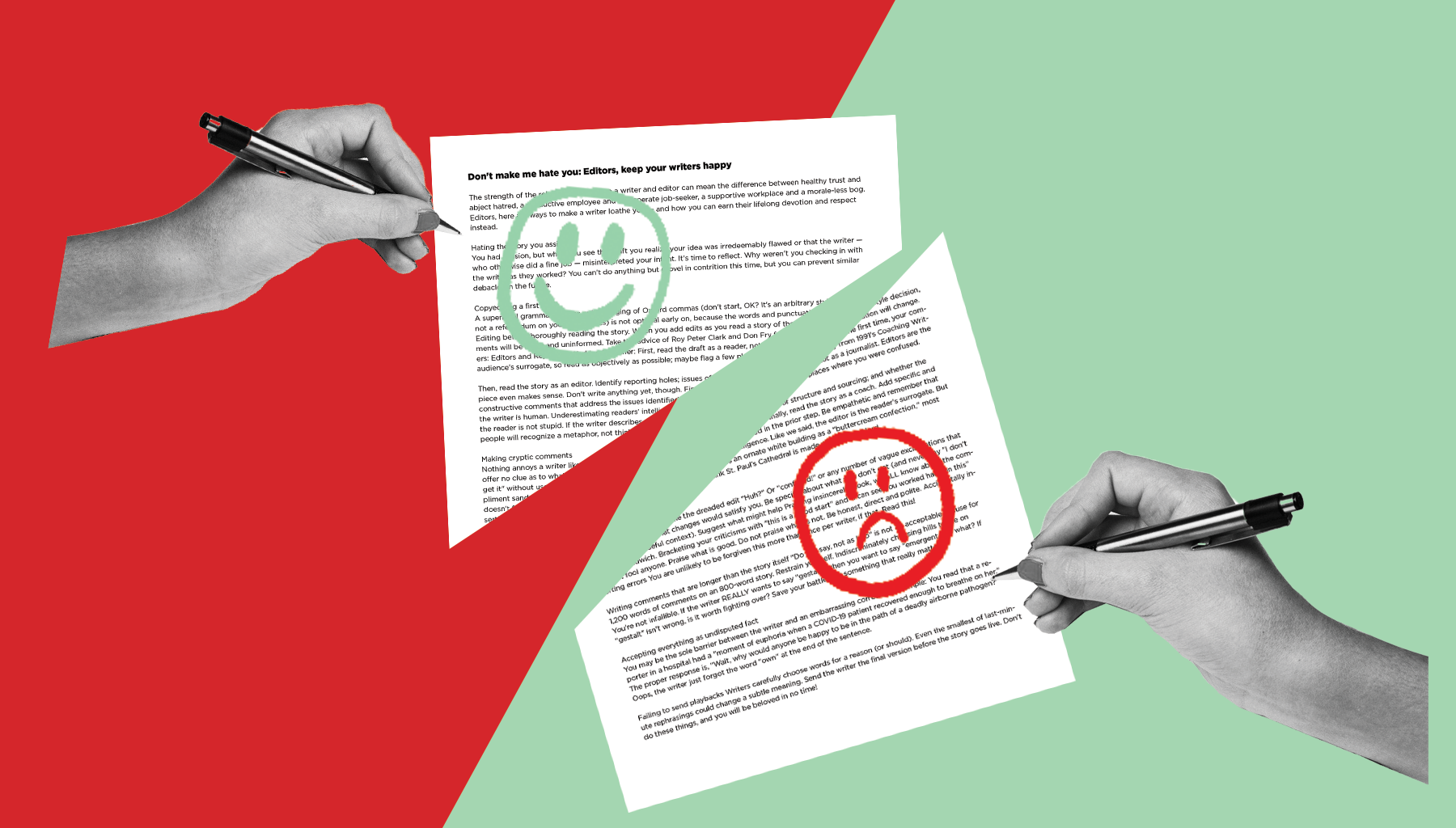 The strength of the relationship between a writer and editor can mean the difference between healthy trust and bitter resentment, a productive employee and a desperate job-seeker, a supportive workplace and a morale-less bog.

Editors, here are some things you might be doing that will make a writer loathe you — and ways you can earn their lifelong devotion and respect instead.

Not wanting the story you assigned

You had a vision, but when you see the draft you realize your idea was irredeemably flawed or that the writer — who otherwise did a fine job — misinterpreted your intent. Acknowledge that the assignment was terrible and/or poorly articulated, and grovel a bit. Prevent future debacles by checking in with writers before they file.

A superficial grammar scan or quick purging of Oxford commas (Don’t start, OK? It’s an arbitrary style decision, not a referendum on your life choices!) is not optimal early on, because the words and punctuation will change. It is certainly not optimal if that’s all you intend to do.

Editing before thoroughly reading the story

When you edit as you read a story the first time, your changes and comments may be contradictory and confusing, because you haven’t yet seen the big picture. Take this advice, from Coaching Writers:

First, read the draft as a reader, not as a journalist. Editors are the audience’s surrogate, so read as objectively as possible; maybe flag a few places where you were confused.

Next, read the story as an editor. Identify reporting holes; issues of structure and sourcing; and whether the piece even makes sense. Don’t write anything yet, though.

Finally, read the story as a coach. Add constructive comments that address the issues identified in the prior steps. Be empathetic and remember that the writer is human.

Not communicating about the editing process

Talk about the process above before it happens. Some people have never been edited beyond a spellcheck and a pat on the head, and will be shocked by the prospect of multiple drafts. Also, tell the writer how to address your questions and comments. In comments mode? By rewriting?

If Dickens had an annoying editor.

Nothing annoys a writer like the dreaded “Huh?” Or “confused!” Or any number of other vague exclamations that offer no indication of what changes would placate you. Be specific about what you don’t get (and never say “I don’t get it” without useful context), and suggest what might help.

Like we said, the editor is the reader’s surrogate. But the reader is not stupid. If the writer describes an ornate white building as a “buttercream confection,” most people will recognize a metaphor, not think St. Paul’s Cathedral is made of sugar and lard.

Look, we ALL know about the compliment sandwich. Bracketing your criticisms with “This is a good start” and “I can see you worked hard on this!” doesn’t fool anyone. Praise what is good. Do not praise — or ridicule — what is not. Be honest, direct and polite.

You are unlikely to be forgiven this more than once per writer, if that.

This was the editor’s fault for assuming she remembered what “proof” means.

Writing comments longer than the story itself

“Do as I say, not as I do” is not an acceptable rationalization for dropping 1,200 words of comments on an 800-word story. Restrain yourself.

If the writer REALLY wants to say “gestalt” when you want to say “emergent,” so what? If “gestalt” isn’t wrong, is it worth fighting over just because you have an irrational dislike of German words? When deciding what hill you’re going to die on, choose one that really matters.

Accepting everything as undisputed fact

You may be the lone bastion between the writer and an embarrassing correction or clarification. A simple “are you sure?” or “source pls!” can prod writers to catch their own mistakes. Full-on fact checking also wards off errors, but whether that should fall to the editor is debatable.

Writers choose words for a reason (or should). Even the smallest of last-minute rephrasings could change a meaning. Send the final version before the story goes live.

Avoid these pitfalls, dear editors, and you will be beloved in no time!