Write digital headlines both readers and Google will love 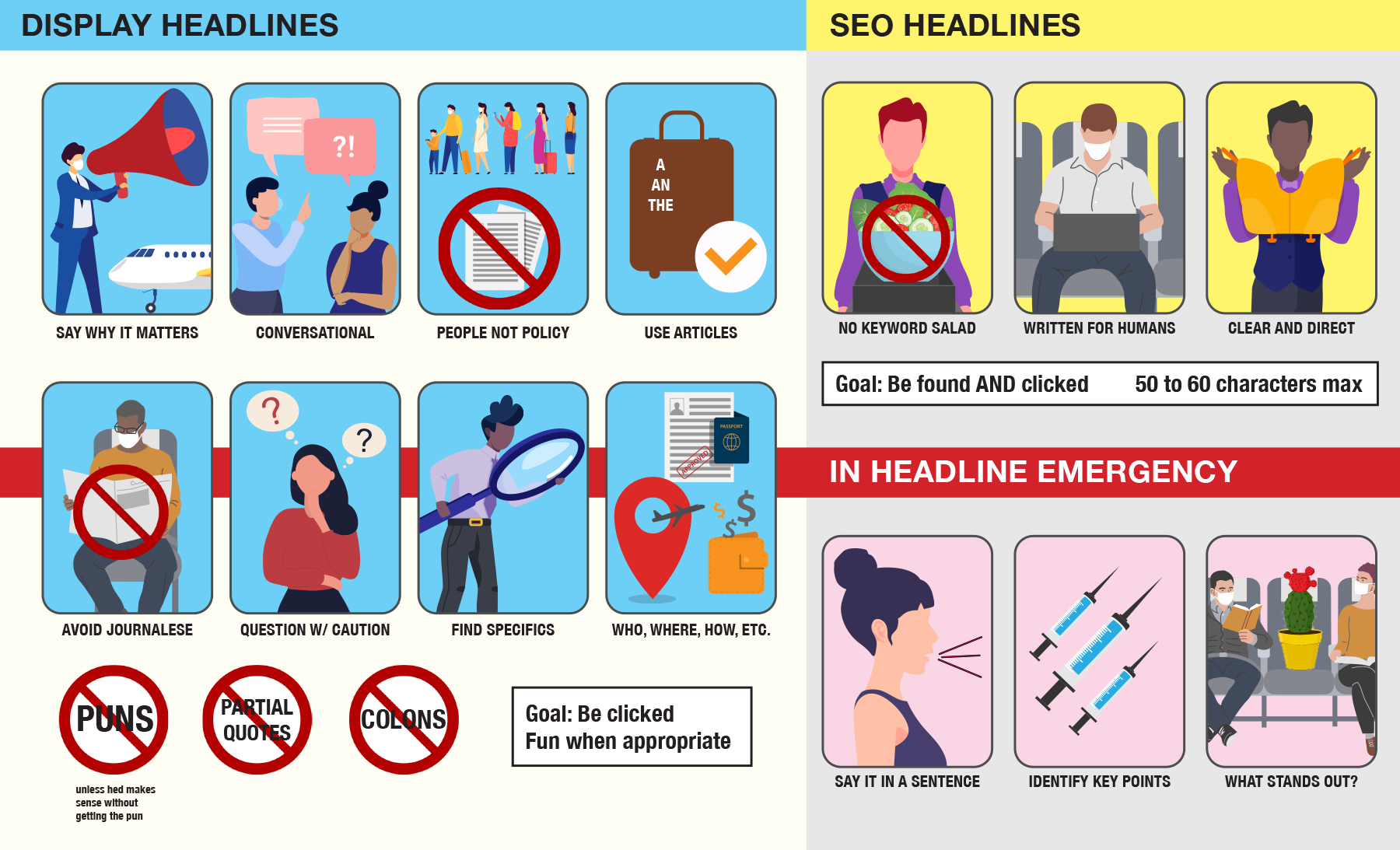 Download your own copy of our headline safety card! (Holly J. Morris/NPR Training and iStock)

Most long-time headline writers have methods and rituals. For print people, the temptation to turn to Rhymezone, IMDB and that idiom dictionary to generate puns and snowclones is nigh irresistible. For others, the siren song of colons, journalese and partial quotes beckons. These, too, are relics of print, where brutal character-count constraints demanded space-saving shorthand.

These days, all the cool digital headlines are relaxed, looser, more conversational. They say, clearly, why something matters — to the reader, to the world. They even use “a,” “an” and “the”! Here are some characteristics of good display and SEO headlines, plus some advice for chasing down an elusive muse. (And don’t forget your SEO description and custom URL.)

These appear on story pages and anywhere else your site serves up content — homepages, landing pages, etc. They also show up on social accounts and Apple News.

Be clear and concise: What’s the story about? Don’t be mysterious — to make a decision to read, a person has to know what they’re getting.

Be conversational: Write a sentence that would sound natural if you said it out loud.

Heads should stand alone: A reader who only looks at the headline should glean crucial information. Perhaps the headline will offer enough news to sate the reader’s curiosity and said reader will peace out; such is life.

Explain why it matters: Why should a reader click? What’s in it for them? How does this impact their lives?

Focus on people, not policy: Endeavor to find a human angle even in the wonkiest of news.

Use articles (a, an, the): Welcome back, little friends!

Include a detail: This won’t always work, but when it does, you have one memorable headline. For example, “Alabama Will Now Allow Yoga In Its Public Schools (But Students Can’t Say ‘Namaste’).

Employ interrogatives (why, how, etc.): They can signal an explanation, or something instructive. Watch for overuse, though — “how” headlines shouldn’t dominate your homepage.

Pun with caution: Wordplay should make sense even if a reader doesn’t get the reference. Like in this one: “Lights! Camera! Factions! Your Eurovision Song Contest 2021 Cheat Sheet.”

Question with caution: Use them sparingly. A question alternative is to put the answer at the start of the sentence, as in “No, You Don’t Need To Be Worried Your Dog (Or Cat) Is Eating Cicadas.”

Issue calls to action: Command the reader. Example: “Read What The Taliban Told NPR About Their Plans For Afghanistan.”

Have fun — when appropriate: Go for it, but don’t alienate readers with esoteric allusions. You don’t need a James Joyce joke, promise.

Avoid journalese: It’s that archaic old-school newspaper sound — a little melodramatic, and full of vocab you’d never speak aloud. Like, “Report sheds light on man who took to Twitter to raise questions on the heels of hammering out agreement after drunken rampage left 20 people slated to nab prison terms for seizing tresses and tomes.”

Avoid partial quotes and colons: Partial quotes can sound unintentionally, and inappropriately, sarcastic. Sometimes they simply don’t make sense without more context than the head can provide. Colons? As noted above, they’re a print convention, not a substitute for “says.”

These appear in Google products and browser tabs.

50 to 60 characters: This really does make a difference to Google, and helps avoid awkward cut-offs on SERPs (Search Engine Results Pages).
Display: Many Stages Are Still Dark, But You Can Now See These Iconic Costumes Up Close
SEO: See Iconic Costumes At The ‘Showstoppers!’ Exhibit in NYC

Be straightforward: Say, bluntly and without frills, what the story is about. If the display headline is clever, the SEO headline could be very different indeed.
Display: Goodwill Doesn’t Want Your Broken Toaster
SEO: Goodwill Has a Trash Problem. We’re the Cause

Write for humans: Google surfaces stories, but people make the decision to click. Aim for a human-readable sentence or phrase, not keyword salad.

Pack in those keywords: Think of terms a reader might type to find this story. Put them at or near the start of the headline.
Display: What’s More Punk Than Teens Screaming In A Public Library? (The rare question headline that works.)
SEO: Teen Punk Band the Linda Lindas Scream ‘Racist, Sexist Boy’ in a Public Library

Use Google Trends to pick keywords: Are readers searching “Great Mortality,” “bubonic plague” or “pestilence”? If Google had existed in the mid-1300s, you could have found out!

Say it aloud, find key points, what stands out?

Pretend you know nothing: The reader is approaching the story without a lot of information. Ideate as if you are, too.

Identify the story’s key points: If you had to choose one or two takeaways, what would they be? Can you get one into a headline-size space?

Look in the nut graf for ideas: A story without a nut graf may lack a clear direction. Add one, if you can. If the writer is stumped, get them to say, in a sentence, what their story is about. They will then say the nut graf.

Does anything stand out? Sometimes the headline — especially one that highlights a telling detail — is something that jumps out at you from the story.

Say your options out loud: This feels less weird at home than in an open-plan office.