Find your groove when mixing audio stories about music 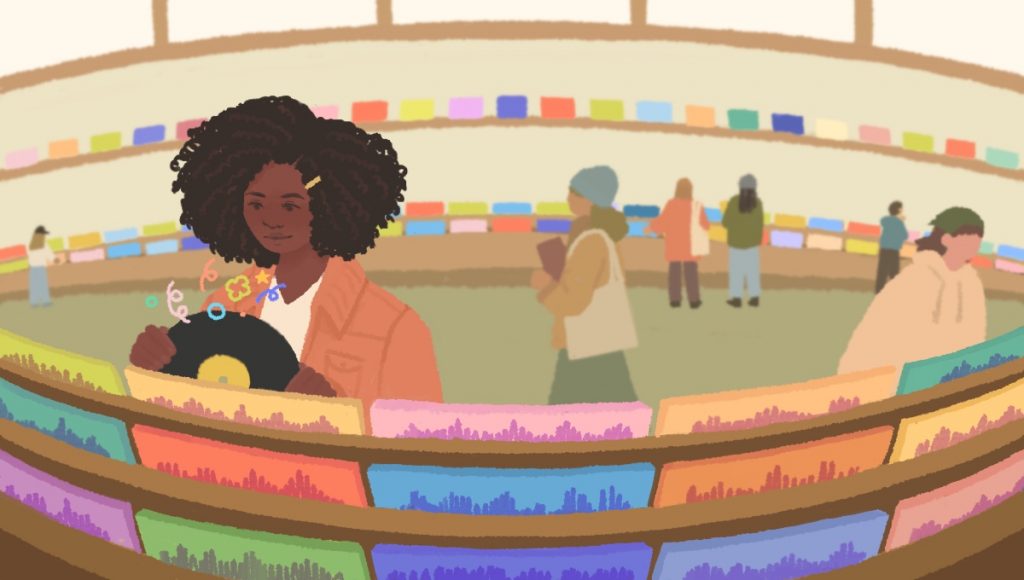 Audio stories about music, when done right, highlight artists and songs without overpowering commentary and interviews. And that requires top-tier mixing. Follow these tips from NPR producers to create pieces listeners will want to groove to.

Once you’ve got the elements for a music piece in hand — reporter tracks, music options, interviews — listen to all of it first.

NPR producer Kelli Wessinger notes where reporters call out specific parts of an artist’s work, and adds music accordingly. If the piece is less specific, though, it’s up to her and what she likes.

“It’s fun, because you get to pick those posts and that’s really lovely and it’s based on your preferences,” she says.

More than half of the music she mixes is new to her. Choosing what to use is more intuitive than one might think, she says — even if the music is in a language you don’t understand. One of Wessinger’s favorite pieces she mixed is about a Mexican folk band, though she doesn’t know Spanish.

“It’s good enough to understand a rhythm,” she says. “As a music listener, if you can identify ‘I like this part of the song,’ that is literally all it takes.”

You want the music and voices to flow together seamlessly, Mohamed and Wessinger agree.

Mohamed says the crossfade functionality in audio editing software is the best way to achieve this, with some caveats.

If you’re playing around with the crossfade and the function just isn’t cutting it, split the music onto two tracks and craft each fade specifically how you want it. Splitting it up will give you more flexibility.

Don’t be afraid to adjust the levels of the dialogue. Typically, sentences start loud and taper off. Mohamed splits up the audio of a sentence and brings the quieter end up a couple dBs so she can let the music fade up and post out of the reporter’s words.

Getting the perfect cut or fade is subjective, but it’s OK to trust yourself. “If you like something, it’s probably good,” Wessinger says.

If you could watch Mohamed mixing at her desk, she says you’d see her physically moving in her chair. It helps her find the perfect moment to bring in or fade out the music in between dialogue spots.

“You have to sort of dance, rock or sway to really feel what’s going on,” she says. “If you’re coming up on a phrase, breathe into it and really feel it.”

Test everywhere and every way

Listen to your edits without looking at the tracks in the software. “When you see edits coming, it changes the way you perceive the audio,” Mohamed says. Open up a new window, close your eyes or walk away, and play the piece so you can pinpoint what sticks out to you.

If you’re editing a long piece, it’s especially important to check your levels every so often to make sure they’re consistent. If you forget, you could end up with a piece that slowly gets louder and loudER and LOUDER.

Once you have a strong first draft, play the piece from every speaker you can find. Listen in the car, use your best and worst headphones, send it to a Bluetooth device like an Amazon Echo. The frequency response is different on each, so testing will show you what needs correcting.

Experiment on your own

While NPR producers mostly use Pro Tools, Adobe Audition and NPR’s proprietary audio editor to mix their pieces, free options like GarageBand and Audacity are fine for practice.

Mohamed suggests finding a friend who’s a musician and recording a chat with them, along with some of their music, then try to piece it all together. Or set up a playlist of your favorite songs and manually crossfade between each one.

You can also learn by listening. Wessinger and Mohamed each shared a piece they’re proud of:

Wessinger edited this feature on Victoria Sur, a Colombian artist who writes lullabies for her children. Wessinger didn’t know anything about the artist, but she loved the music so much that she’s been listening to it ever since. She says it’s one of many examples of new music she’s discovered in her work.

In this feature about the Rockefeller Foundation’s EduHam program, which gave students $10 tickets to see Hamilton, Mohamed worked around the lyrics-heavy music from the show by hiring a musician to play the themes of the songs on a keyboard. She edited in that audio to underscore the reporting without layering lyrics on top of the reporter tracks.