Yes, you can cram your story into a one-minute TikTok. Here's how 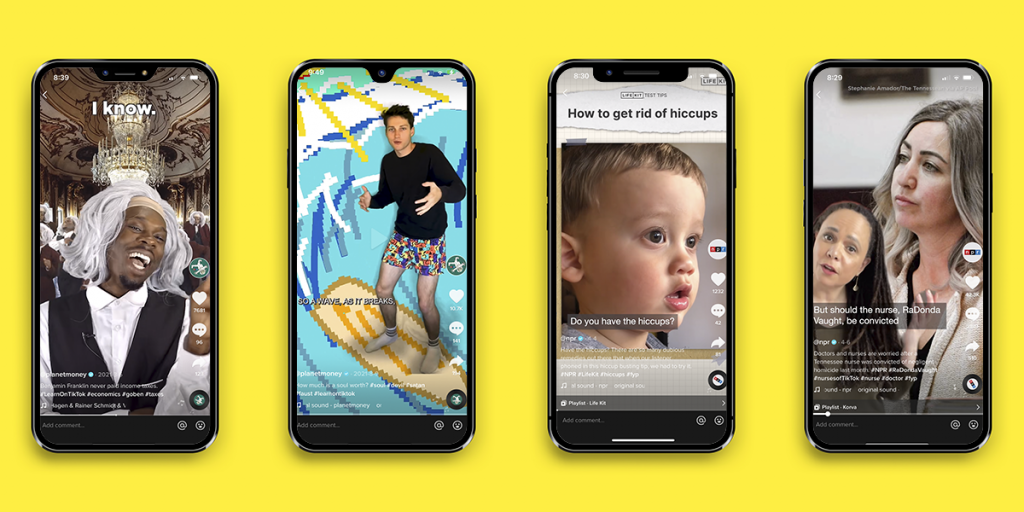 You’ve spent hours, perhaps days, doing interviews, gathering sound, scripting and editing. You’ve tracked the script with all the right inflections and pauses. And you’ve shed sweat and tears mixing it down into a beautiful soundscape and distributed it to your patient and adoring fans.

Only now you need a super-short video to appease the internet and lure new audiences. You have to tell the story, with visuals, in under a minute, for those fickle smartphone thumb-scrollers.

NPR has been posting TikToks and Instagram Reels ever since Planet Money’s Jack Corbett explained the New York Stock Exchange’s circuit breakers in 2020. NPR shows and podcasts — Consider This, Life Kit, NPR Newscasts, The TED Radio Hour and Throughline — are all doing it regularly.

In a recent training, NPR producers and hosts of short videos compared notes and came up with the following tips:

Three seconds to get attention: Internet users are brutal and impatient. They decide fast if they want to watch your video. Make the first line and image grabby. Maybe a cute animal?

Get right into the story: Cut the background, or move it down, and start with a bold statement, surprise, question or mystery. You don’t need to explain as much as you think you do up top. To save time, this NPR Newscast video gets straight to the point:

Be authentic: Let your voice come through — you want your video to sound like a human made it, not a corporation. And don’t force weirdness for weird’s sake. Planet Money TikToks, however, are nothing if not authentically weird:

@planetmoney We find what we look for in the world, including confirmation of our preexisting beliefs. #tiktokpartner #learnontiktok #psychology #bias ♬ original sound – planetmoney

Video drives the story: The same way a good radio piece is built around sound, video is built around images. Try first to think of a sequence of images that will tell the story. See how this TikTok uses stills and video clips to show the mood in a Lviv, Ukraine, train station:

@npr Over a month into the war, Ukrainians are still fleeing to Poland through the Lviv Railway Station. #ukraine #NPR #fyp #poland ♬ original sound – npr

Write a narrative arc: Good short videos start with a statement — a promise, a problem, etc. — and deliver a resolution in the end. Here’s an example from Life Kit: A kid has hiccups, he’s given vinegar, he hates the taste but he’s cured!

@npr Have the hiccups? There are so many dubious remedies out there that when our listener phoned in this hiccup busting tip, we had to try it. #NPR #LifeKit #hiccups #fyp ♬ original sound – npr

Less is more: Keep it simple. You only have room for one big idea. Can you tell it to a friend in one sentence? If not, keep cutting. Here’s the Russia-Ukraine conflict explained in one minute:

Keep the writing tight: Write short, conversational sentences. Your words don’t have to do all the work — visuals can help make your point, too. For example …

Mix up the pace: Use signposts to let the audience know that this is what they really need to pay attention to. For instance …

Check out the pacing and signposting in this Consider This TikTok.

Choose newsy, yet unreported topics: What are others not covering? What are we missing in our coverage? What are people talking about right now that they need more information on? Planet Money used the TikTok sea shanty trend to explain the Maritime Law of General Average:

Don’t know where to start? Go through your story and make a list of elements it can’t live without. Keep narrowing the list to items without which the story just wouldn’t make sense. Then put them in order and build from there.