Anthony Christian Ocampo is a professor of sociology at California State Polytechnic University, Pomona. As a writer and scholar, his work focuses on race, immigration and LGBTQ issues.

He is the author of Brown and Gay in LA: The Lives of Immigrant Sons (2022) and The Latinos of Asia: How Filipino Americans Break the Rules of Race (2016). His writing has appeared in GQ, Catapult, BuzzFeed, Los Angeles Review of Books and the Chronicle of Higher Education, among other outlets.

Ocampo is an academic director of the National Center for Faculty Development and Diversity and the co-host of the podcast Professor-ing. He appeared in the Netflix documentary White Hot: The Rise & Fall of Abercrombie & Fitch as one of the plaintiffs who sued Abercrombie & Fitch on the basis of racial discrimination. He has received fellowships from the Ford Foundation, Jack Jones Literary Arts, Tin House, and the Voices of Our Nations Arts Foundation.

Raised in northeast Los Angeles, he earned a bachelor’s in comparative studies in race and ethnicity and a master’s in modern thought and literature from Stanford University, and a master’s and Ph.D. in sociology from the University of California, Los Angeles. 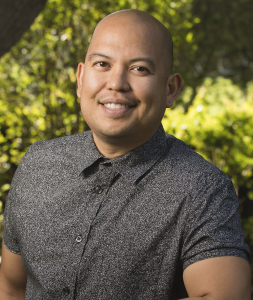 Heard on Latino USA: “Portrait Of: ‘The Latinos Of Asia”