Ayanna Thompson is a professor of English at Arizona State University and the director of the Arizona Center for Medieval and Renaissance Studies. She is a Shakespeare scholar, a consultant, and an expert on race in performance, especially in Renaissance drama.

She is the author of several books, including Blackface (2021) and Passing Strange: Shakespeare, Race, and Contemporary America (2011). Thompson is working on the new Arden edition of Titus Andronicus. As a theater practitioner, she has served as a consultant and dramaturg for several Broadway, off-Broadway and radio productions.

Thompson created the conference series RaceB4Race to build a community for scholars and academics of color who are addressing race in medieval history, literature and culture. In 2021, Thompson received a $3.5 million grant from the Andrew W. Mellon Foundation to further RaceB4Race’s efforts on curricular development, field diversification, academic mentorship, and public humanities work around race in premodern humanities fields. 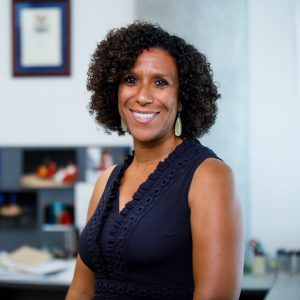 Heard on Code Switch: “All That Glisters Is Not Gold”