Bakari Kitwana is a cultural critic, journalist and activist specializing in hip-hop, youth culture and Black political engagement. He’s the executive director of Rap Sessions, which has conducted over 150 townhall meetings around the nation on issues facing the hip-hop and millennial generations.

Among Kitwana’s books are Why White Kids Love Hip-Hop and The Hip-Hop Generation: Young Blacks and the Crisis in African American Culture. He collaborated with hip-hop artist Rakim’s 2019 book Sweat The Technique: Revelations on Creativity From The Lyrical Genius.

Previously, he was editor in chief of The Source and the Nasir Jones HipHop Fellow at the W.E.B. Dubois Research Institute / Hutchins Center for African and African American Research at Harvard University. He was editorial director of Third World Press and a senior media fellow at The Jamestown Project. Kitwana co-founded the first ever National Hip-Hop Political Convention. 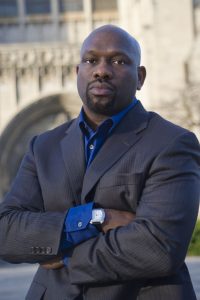 Heard on On Point with Tom Ashbrook: Hip-Hop and Politics