Briana Scurry is a motivational speaker and retired soccer goalkeeper. She was the starting goalkeeper for the United States women’s national soccer team at the 1995, 1999 and 2003 World Cups and the 1996 and 2004 Summer Olympics. Her team won the 1999 World Cup, and she holds two Olympic gold medals.

She is an advocate for women’s brain health, focusing on traumatic brain injuries; a concussion in 2010 led to her retirement. She was inducted into the National Soccer Hall of Fame in 2017. Scurry’s memoir, My Greatest Save, was published in 2022; she is also the subject of the 2022 documentary The Only. 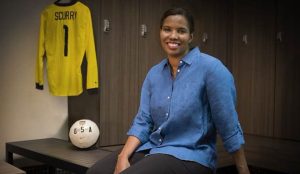