Cheryl Crazy Bull is the president and CEO of the American Indian College Fund, a nonprofit that supports Native American students through scholarships and higher education funding. Her expertise is in education, tribal colleges, and the self-determination of Native people.

Crazy Bull previously held several administrative positions at tribal colleges. She served as an administrator at Sinte Gleska University, a tribal university on the Rosebud Indian Reservation, her home reservation. At St. Francis Indian School in South Dakota, she was the chief educational officer. For 10 years, Crazy Bull was president of Northwest Indian College, a tribal college in Washington.

Crazy Bull is also a board member of IllumiNative, a Native woman-led organization that focuses on increasing the visibility and accurate representation of Native people. Crazy Bull serves on the boards of the Native Ways Federation, a national association of Native-led nonprofits; the State Higher Education Executive Officers Association’s Equity Advisory Committee; and the Brookings Institution.

Crazy Bull is a member of the Sicangu Lakota Nation. She holds a bachelor’s in Business Management from the University of South Dakota and a master’s in Educational Leadership from South Dakota State University. 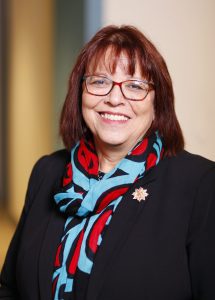