Christelle Khalaf is the associate director of the Government Finance Research Center at the University of Illinois Chicago. She is an applied economist with a focus on economic development, and studies regions in the U.S., especially Appalachian Ohio, Southern Illinois, and Wyoming, that are heavily reliant on natural resources.

Khalaf was previously the associate director of the University of Wyoming’s Center for Business and Economic Analysis.

Khalaf conducts research on energy management across state government, industry and other groups. Previously, she was an economist with Ohio University’s Voinovich School of Leadership and Public Affairs, where she served as a task lead on multiple U.S. Economic  Development Administration projects, including analyzing the impacts of solar energy deployment in Appalachian Ohio. She is a task lead with a U.S. Department of Energy project, examining mineral reserves in the Wyoming Greater Green River Basin. She also served as a member of the Ohio Economic Roundtable convened by Ohio Governor Mike DeWine to discuss the COVID-19 pandemic’s effects on the state’s economic outlook. She is a member of the advisory panel on the Anchor Economy Initiative at the Federal Reserve Bank of Philadelphia.

Khalaf attended Université Saint Joseph in Beirut, Lebanon, for her B.A. in economics. She received her doctorate and master’s in economics from North Carolina State University and has a Harvard Kennedy School executive certificate in Leading Economic Growth. 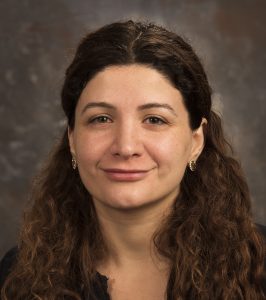 Courtesy of the University of Wyoming

Source of the Week · Christelle Khalaf – NPR’s All Things Considered