Gabriel Sanchez is a professor of political science, executive director of the Robert Wood Johnson Foundation Center for Health Policy, and co-director of the Institute of Policy, Evaluation and Applied Research at the University of New Mexico. He is a principal at Latino Decisions, a Latino polling firm, a founding member of the UNM Native American Budget and Policy Institute, and an expert in Latino health policy.

Sanchez is the co-author of the textbook Hispanics and the U.S. Political System (2008), and he has been published in journals such as Political Research Quarterly and Urban Affairs Review. His latest book is Latinos and the 2012 Election: The New Face of the American Voter (2015); he is working on a second edition that will look at the 2016 election.

In 2011, Sanchez was awarded Best Article in Political Research Quarterly, and in 2010, he was awarded the Luminaria UNM Presidential Award for Commitment to Diversity. He has been a guest on NPR and KUNM, and featured in The New York Times, Los Angeles Times and The Economist. 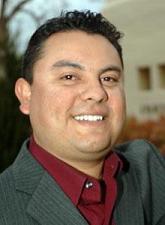 Heard on NPR: Tell Me More: Are Polls Good News For Either Candidate?