Gita Gopinath is the first Deputy Managing Director of the International Monetary Fund. Previously, she was the Fund’s chief economist and a professor of international studies and economics at Harvard University.

She is the co-editor of the Handbook of International Economics and was earlier the co-editor of the American Economic Review, managing editor of the Review of Economic Studies, and co-director of the International Finance and Macroeconomics program at the National Bureau of Economic Research. She was a visiting scholar at the Federal Reserve Bank of Boston, member of the economic advisory panel of the Federal Reserve Bank of New York, economic adviser to the chief minister of Kerala state in India, and member of the Eminent Persons Advisory Group on G-20 Matters for India’s ministry of finance.

Gopinath was named among Bloomberg’s 50 people who defined 2019. Foreign Policy named her one of the Top Global Thinkers in 2019 and Time named her among the Women Who Broke Major Barriers to Become “Firsts” in 2019. 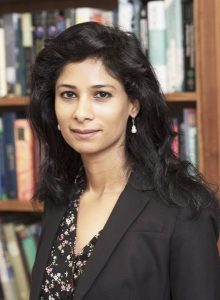 As heard on NDTV: