Jules Gill-Peterson is an associate professor at Johns Hopkins University, where she teaches transgender history, culture and politics. She is a historian who writes about the history of sexuality, focusing on racial histories of sex, gender, and trans existence in both institutional and conversational science and medicine.

In Histories of the Transgender Child (2018), which won a Lambda Literary Award and the Children’s Literature Association Book Award, she debunks the myth that transgender children first appeared in the 21st century. She is working on several books, including The Trans Girl Lyric, a memoir that challenges how trans women of color are treated in society, and Gender Underground: A History of Trans DIY, an examination of how trans people in the 20th century trailblazed both social and medical transitions. Most recently, Gill-Peterson was featured in Framing Agnes, a documentary about trans people in the 1960s that premiered at the 2022 Sundance Film Festival.

Gill-Peterson holds a Ph.D. in American studies from Rutgers and a bachelor’s in history from the University of Ottawa. 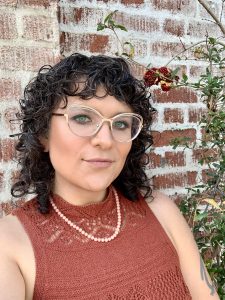 Heard on The Katie Harper Show: ‘Histories Of The Transgender Child’ with Jules Gill-Peterson