Update as of February 2021: Kristen Clarke has been nominated by President Biden to run the Civil Rights Division.

Kristen Clarke is president and executive director of the National Lawyers’ Committee for Civil Rights Under Law. In this capacity she is a legal advocate on behalf of the rights of communities of color, especially in the areas of social justice, equal economic opportunity, criminal justice and judicial diversity, among others.

Before joining the Lawyers’ Committee, Clarke spent several years at the NAACP’s Legal Defense and Educational Fund where she helped lead the organization’s efforts in voting rights and election law reform across the country. Before joining the LDF, she worked at the U.S. Department of Justice’s Civil Rights Division, where she served as a federal prosecutor, handling cases of police brutality, hate crimes, and human trafficking. Clarke is a regular contributor to a number of outlets including CNN, MSNBC and TV One as well as a 2017 recipient of Quinnipiac University’s Thurgood Marshall Award, among others. 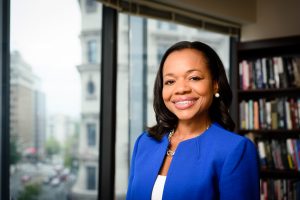