Malakai is a director who describes her mission as “to be a disruptor by telling world-building and fantastical narratives that turn archetypes of the Black diaspora on its head.” She is the founder and CEO of the nonprofit Made in Her Image, which provides opportunities to women and nonbinary youth of color to create their own films, scripts, content and more.

Made In Her Image promotes social equity within film, media and technology. Officially launched in 2018 in Phoenix and Los Angeles, the organization has collaborated with Disney, Paramount, Universal, Panavision and the Sundance Institute. Made In Her Image was awarded the 2020 SXSW Community Service Award for its work within the field of diversity for creating a pipeline of learning and educational empowerment.

An Arizona-born Afropunk with a deep love of technology and Afro-futurism, Malakai’s short films have premiered at Sundance, the Pan African Film Festival, the Black American Film Festival, the Phoenix Art Museum, Reel Sisters and Cannes. In 2019, as part of the AT&T Hello Lab directing fellowship, she directed Postmarked. Her short film Souls was released that same year; she most recently directed all the episodes of the podcast Ghost Tape.

Malakai is a graduate of SCC Film School and holds a B.A. in communications from Grand Canyon University in Phoenix, Arizona. 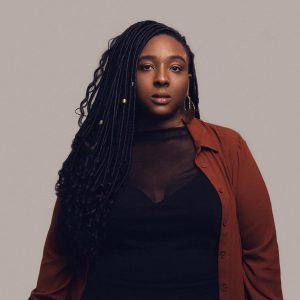 Heard on On the Brink: “Malakai And The World Made In Her Image | Ep.1”

Source of the Week · Malakai – On the Brink