Matthew L.M. Fletcher is the Harry Burns Hutchins Collegiate Professor of Law at the University of Michigan, where he teaches federal Indian law, tribal law, Anishinaabe legal and political philosophy, constitutional law, federal courts, and ethics. He is the primary editor and author of Turtle Talk, a law blog on American Indian law and policy. Fletcher is also Chief Justice of the Pokagon Band of Potawatomi Indians and the Poarch Band of Creek Indians.

Fletcher specializes in a number of areas of law, especially pertaining to federal law and Indian tribes. He has authored several books, including American Indian Education: Counternarratives in Racism, Struggle, and the Law and American Indian Tribal Law; and edited Facing the Future: the Indian Child Welfare Act at 30. His latest book is The Ghost Road: Anishinaabe Responses to Indian Hating.

Fletcher is a citizen of the Grand Traverse Band of Ottawa and Chippewa Indians. 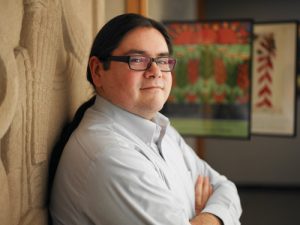 Heard on The Fronteras Desk: