Pablo de León is the director of the Human Spaceflight Laboratory at the University of North Dakota, where he is also a professor and chair of the space studies department. He has been working in the space field for three decades as an aerospace engineer in his native Argentina and in the United States.

De León has developed prototypes for several planetary space suits and has been the test subject on several space suit experiments. His prior experience was as chief designer and fabrications manager for several underwater-simulation pressure suit systems.

He has also been an investigator for several NASA-funded projects, including the development of field tests at physical locations on Earth that share similarities with the extreme space environments of the moon and Mars. He has flown, as payload specialist with NASA, to test how fluids move in simulated gravity through 80 parabolic flights. He’s in charge of a NASA-funded project for the development of a prototype space suit using 3D printing technology, and is based at the Kennedy Space Center in Florida.

De León has written several books about space projects and space history, founded a magazine of space exploration, and was editor in chief of the Latin-American Journal of Space Science and Technology. He has participated in more than 50 technical papers on space engineering and life support systems presented at international congresses. He belongs to a number of professional aerospace engineering societies and is a founding member of the Space Generation Advisory Council.

He has a postgraduate degree in space studies from France’s International Space University and a Ph.D. from the University of San Andrés in the history of science and technology. 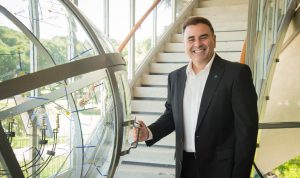